SAY No to
Durban IV

How the UN conference against racism
was hijacked to single out Israel
and spread antisemitism.

In 2001, one week before the September 11 terrorist attacks, the UN hosted the “World Conference on Racism” in Durban, South Africa.

Instead of combating racism, however, the conference actually incited it. Durban became the worst international manifestation of antisemitism in the post-war period.

In preparation of the Durban Declaration, states in the Asian regional group met in Tehran in February 2001. Their outcome text demonized Israel, accusing it of committing “a new kind of apartheid,” “a crime against humanity” and “a form of genocide.”

This language was at the last minute excised from the Durban Declaration under pressure from members of the European Union, who threatened to follow the US and Israel and pull out of the conference. Nevertheless, the final text targeted Israel as an alleged perpetrator of racism by singling out “the plight of Palestinians under foreign occupation.”

Hate in the Plenary

Inflammatory speeches against Israel were ubiquitous. PLO chairman Yasser Arafat told conference delegates of the “ugliness” of “Israeli racist policies and practices against the Palestinian people.” Cuban dictator Fidel Castro spoke of “the dreadful genocide perpetrated, at this very moment, against our Palestinian brothers.”

At the conference’s parallel NGO Forum, non-governmental organizations formally declared Israel a “racist apartheid state,” guilty of “genocide.” The NGOs called on the international community “to impose a policy of complete and total isolation of Israel as an apartheid state as in the case of South Africa,” including by “the imposition of mandatory and comprehensive sanctions and embargoes.”

At an exhibit of the NGO Forum, the Arab Lawyers Union distributed caricatures of Jews with hooked noses and fangs dripping with blood, clutching money.

Thousands marched in Palestinian-led demonstrations in the streets of Durban, with one placard reading, “Hitler Should Have Finished the Job.” Nearby, some were selling the most notorious of anti-Jewish tracts, The Protocols of the Elders of Zion.

Jewish human rights activists at Durban were physically intimidated and threatened, with mobs screaming at them: “You don’t belong to the human race!”

The Durban strategy — exploiting the language of universal human rights to wage a coordinated campaign to demonize and boycott the Jewish state — continues to be used throughout the world today to spread antisemitism disguised as anti-Zionism.

"For me, having experienced the horrors of the Holocaust first hand, this was the most sickening and unabashed display of hate for Jews I have seen since the Nazi period."

UN Watch sounded the alarm ahead of the conference, including in the world’s leading newspapers. It fought to amend pernicious draft texts, and urged diplomats in Geneva and other capitals to stem the anti-Israel onslaught. At the Durban conference, UN Watch representatives played a key role in exposing and confronting the antisemitic hatred. In the aftermath, UN Watch documented the debacle at Durban for the historical record. 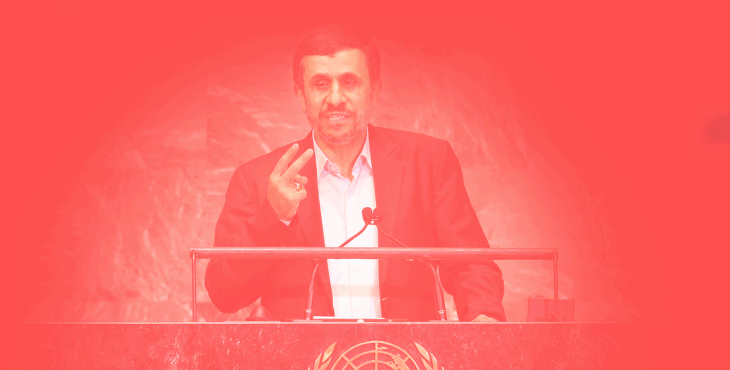 On August 27, 2007, the UN Human Rights Council convened to initiate the organization of the “Durban Review Conference.” The stated objective of Durban II was the review of countries’ implementation of the 2001 Durban Declaration on racism. But the organizers’ true intent was to replay the 2001 propaganda assault against Israel and the West.

The first act of the UN’s Durban II planning committee was to name Mrs. Najat Al-Hajjaji, the Geneva ambassador of Libyan dictator Muammar Qaddafi, as Chair. The Qaddafi regime was chosen despite its record of massive human rights violations including acts of racism and discrimination. The Islamic Republic of Iran was elected by acclamation as one of the vice-chairs.

When the conference began on Monday, April 20, 2009, Iranian President Ahmadinejad, a notorious Holocaust denier, was the opening speaker.

“World Zionism personifies racism,” he said. It “falsely resorts to religion and abuses religious sentiments to hide its hatred and ugly face.” After World War II, said Ahmadinejad, “a totally racist government in occupied Palestine” was established, “under the pretext of Jewish suffering.”

Diplomats from the remaining EU countries in the conference stood up and walked out in a powerful protest.

The conference concluded by reaffirming the 2001 Durban Declaration. However, it was much discredited by the walk-out of leading democracies, and by the powerful counter-events and rallies organized by UN Watch and its partners.

This strategy continues to be used throughout the world today to spread antisemitism disguised as anti-Zionism.

10 Countries pulled out of the conference in advance:

"You do not combat racism by conferences that produce declarations containing hateful language, some of which is a throwback to the days of 'Zionism equals racism;' or that supports the idea that we have made too much of the Holocaust; or suggests that apartheid exists in Israel; or that singles out only one country in the world, Israel, for censure and abuse."

While Durban II was being planned over two years, UN Watch warned audiences worldwide about the threat of a replay of the 2001 conference. UN Watch met with  lawmakers, diplomats and UN officials, and initiated the “What to Do about Durban II” global conference a year prior to the UN event.  UN Watch’s campaign culminated in the withdrawal of 10 countries from the conference. Throughout the week-long Durban II event in April 2009, UN Watch organized a series of powerful counter-rallies and conferences in major public venues around Geneva.

What was said and decided:

• UN member states assembled for a high level meeting and decided to reaffirm the 2001 Durban Declaration.

• Anti-Israel and anti-Western sentiment was pervasive. According to the UN summary, “a number of speakers highlighted national policies and efforts to address victims’ grievances, with several delegates calling attention to the discrimination inherent in the occupation of Palestine and strongly underlining the historical intolerance directed against the Palestinian people.”

Six months into the Assad regime’s assault on the Syrian people, Syrian Ambassador Bashar Ja’afar railed against “the criminal record and violations of human rights” as well as “the Fascist racism” of the “Israeli system of apartheid,” which was committing “mass racist violations” in “the occupied Syrian Golan against Syrian people.”

Tunisian Foreign Minister Mohamed Mouldi Kefi, who co-chaired a Durban III round table discussion, spoke of “feelings of injustice between peoples” and “liberation of peoples still under occupation” and he cited “first and foremost, the Palestinian people,” complaining of international “double standards.”

Saudi Arabian envoy Prince Turki bin Saud Al Kabeer  claimed “the clearest illustration of comprehensive racial discrimination [is] against the Palestinian people today,” who are “subjected to all forms of racial, political, socio-economic, and religious discrimination,” including a “racial separation wall.”

Cuban Deputy Foreign Minister Abelardo Moreno attacked the West by singling out “Europe and North America” for “violent acts of racism,” “theories promoting race and culture superiority” and “neo-Fascism” which is “institutionalized,” and said that “Palestine remains subjugated to a cruel and illegal occupation.”

Amnesty International praised the Durban Declaration and its 2009 follow-up as “products of broad global convergence,” and called for action by all “including those countries that have decided not to engage in this process or to withdraw.”

"Since its inception at the 2001 World Conference Against Racism in Durban, South Africa, the Durban process has included ugly displays of intolerance and anti-Semitism."

In parallel with Durban III, UN Watch led a coalition of more than 20 NGOs to hold a genuine human rights conference, the We Have A Dream Summit — turning the tables on the dictatorships. The event successfully exposed the hypocrisy of Durban III, shamed the world’s worst abusers and gave a voice to the world’s most needy human rights victims, those who are never given the UN podium.

On September 22, 2021, pursuant to a UN General Assembly resolution adopted on December 31, 2020, the United Nations will once again convene heads of state in New York, to mark the 20th anniversary of the Durban Conference.

Durban IV will endorse this perversion of the principles of anti-racism. As world leaders gather for the General Assembly’s annual opening, the Durban IV gathering plans to adopt a “political declaration” calling for the “full and effective implementation” of the Durban Declaration.

SAY NO TO DURBAN IV

38 countries said NO and pulled out of Durban IV:

What UN Watch is doing:

UN Watch is urging countries to pull out of Durban IV, so as not to legitimize a process tainted by antisemitism. Through this website, our online petition supported by numerous members of parliament, our video and social media campaign, UN Watch educates public opinion about the history and significance of the Durban process.

No one should legitimize a process tainted by hate.
Urge more countries to pull out of the UN’s tainted Durban IV gathering.