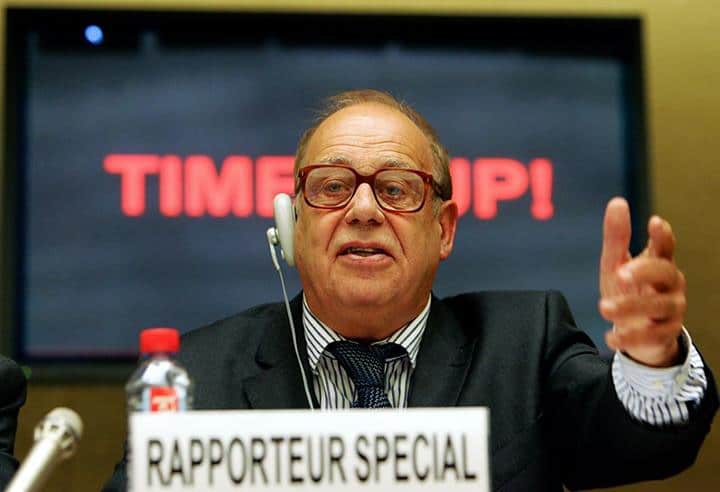 Excellency:
We urge you to oppose Switzerland's absurd nomination of Jean Ziegler, as the sole candidate of your Western Group, to the UN Human Rights Council Advisory Committee, the election for which is scheduled for September 30, 2016.
Mr. Ziegler, who has written books advocating "reasonable hatred of the West," would absurdly occupy one of only three seats allotted to Western countries.  The official UN criteria for the position are expertise in human rights, high moral standing, independence and impartiality.  An analysis of Mr. Ziegler’s record raises serious questions as to his satisfaction of these requirements.  Concerns include:
• Mr. Ziegler’s abuse of his former UN Mandate: When he served as UN special rapporteur on the right to food, Mr. Ziegler ignored many of the world’s most starving populations, instead focusing attention on his personal political agenda.  As documented in the UN Watch report “Blind to Burundi,” during 2000 to 2004, Mr. Ziegler systematically failed to speak out for numerous food emergencies, in Burundi, the Central African Republic, Sierra Leone and elsewhere.
In 2002, World Food Program Executive Director James T. Morris sent  urgent letters to UN Secretary-General Kofi Annan warning that Ziegler as Special Rapporteur on the Right to Food had engaged in “profoundly immoral” actions and “inflammatory” politics that endanger the lives of millions of starving people worldwide. The WFP chief’s 24 October 2002 letter, published on Wikileaks, makes the most severe accusations against Jean Ziegler — and seeks to remove him.
In the letter, the World Food Program—the real expert on hunger—accuses Mr. Ziegler of making it “harder rather than easier for WFP to help hungry people fulfill their right to food in emergencies.” Mr. Ziegler, says the WFP, is “playing politics with aid,” and his actions and statements are “profoundly immoral” and “unconscionable.”
According to the World Food Program, the “clearly inflammatory politics played by Mr. Ziegler has had a negative impact on the lives of the hungry.” Moreover, Mr. Ziegler’s “public statements and the reports he has submitted to the General Assembly show a serious lack of understanding of economics and the details of the food situation in the areas he professes to analyze on behalf of the High Commissioner.
• Mr. Zieger’s support for serial violators of human rights: In 1986, Mr. Ziegler served as advisor to Ethiopian dictator Colonel Mengistu on a constitution instituting one-party rule.  In 2002 he praised the Zimbabwean dictator, saying,  “Mugabe has history and morality with him.”  According to Le Monde, he paid visits to Saddam Hussein in Iraq, and Kim Il-Sung in North Korea.  Mr. Ziegler is also a long-time supporter of Cuban dictator Fidel Castro, whose regime Mr. Ziegler hailed during an official visit in October, while he refused to meet Cuban dissidents. Also this year, during an interview in Lebanon, Mr. Ziegler said, “I refuse to describe Hezbollah as a terrorist organization. It is a national resistance movement. I can understand Hezbollah when they kidnap soldiers…”
• Mr. Ziegler’s involvement with Libyan propaganda: In 1989, shortly after Libyan agents blew up Pan Am 103 over Lockerbie, Scotland, Mr. Ziegler went to Libya to co-found the “Moammar Qaddafi Human Rights Prize,” and served as its Geneva spokesman.  The prize has since been awarded to anti-Western dictators such as Fidel Castro and Hugo Chavez.  It has also been awarded to notorious racists and anti-Semites such as Louis Farrakhan, leader of the Nation of Islam, and Malaysian prime minister Mahathir Muhammad.  Bizarrely, in 1989 he boasted of it, Mr. Ziegler later denied, over a period of 10 years, any involvement with the prize; in 2013, faced with video evidence, he admitted that he received the prize. Ziegler's cover-up was exposed by UN Watch, Swiss TV, the Neue Zurcher Zeitung, and Le Matin.
• Ziegler’s support for convicted Holocaust denier Roger Garaudy: In 1996, Mr. Ziegler publicly defended Roger Garaudy, the French Stalinist whose book, "The Founding Myths of Modern Israel," denies the Holocaust. “All your work as a writer and philosopher,” Mr. Ziegler wrote on April 1, 1996, “attests to the rigor of your analysis and the unwavering honesty of your intentions.  It makes you one of the leading thinkers of our time.”  In 2002, Mr. Garaudy was awarded the Qaddafi Prize—the same year that Mr. Ziegler received it as well.
Many of the world’s leading authorities have objected to Mr. Ziegler’s practices.  In 2005, both UN Secretary-General Kofi Annan and High Commissioner Louise Arbour publicly denounced Mr. Ziegler for having compared Israeli soldiers to concentration camp guards.  He is the only UN expert to have been so reprimanded.  Seventy U.S. congressmen wrote to the UN, citing Mr. Ziegler for anti-Semitism. The Canadian government filed an official protest.
In April 2006, an international coalition of 15 non-governmental organizations, including victims of Cuban and Libyan abuses, protested Mr. Ziegler’s nomination as a UN expert, citing his disturbing record.  Similarly, many scholars have questioned Mr. Ziegler’s academic credentials.  For example, when he was made professor at the University of Geneva, eminent historian Herbert Luthy returned his honorary doctorate in protest.
We note that late Venezuelan ruler Hugo Chavez nominated Mr. Ziegler for the same post in 2004, but that he failed to win election.
To avoid causing even further harm to the credibility of the world’s highest intergovernmental human rights body, we urge you to oppose this nomination.
Thank you.