The United Nations Commission of Inquiry
on the Israeli-Palestinian Conflict

Pillay Commission Is Not Impartial

In wake of the 11-day Hamas-Israel war of May 2021, the Palestinians and Pakistan, acting on behalf of the Islamic group of states, initiated an emergency session of the U.N. Human Rights Council and succeeded in creating yet another Commission of Inquiry targeting Israel and incentivizing Hamas.

This one, however, is unprecedented. Its scope includes not only the war of May 2021, but all events leading up to it, and since. They also have the broad mandate to examine “root causes” of the conflict, including alleged “systematic discrimination” based on race.

Whereas all past inquiries on Israel lasted for about a year, this one is perpetual—it goes on forever.

UN rules require that commissioners be impartial. Pillay is the opposite. On repeated occasions, Pillay has publicly accused Israel of being an Apartheid state. She has even signed petitions lobbying governments to “Sanction apartheid Israel.”

Navi Pillay was appointed to ensure a guilty verdict against Israel, to label it an Apartheid state with the UN’s imprimatur.

To demand an end to this perpetual inquiry, which has all the credibility of a Stalinist show trial, please join UN Watch’s campaign by signing our petition.

On 27 May 2021, at the request of the Palestinian delegation and Pakistan on behalf of the Islamic group of states (the Organization of Islamic Cooperation), the Human Rights Council held a special session on “the Grave Human Rights Situation in the Occupied Palestinian Territory, including East Jerusalem.”

By a vote of 24 to 9, with 14 abstentions, the Council adopted the resolution “Ensuring respect for international human rights law and international humanitarian law in the Occupied Palestinian Territory, including East Jerusalem, and in Israel.”

Through this resolution, HRC/30/1, the Human Rights Council decided to “urgently establish an ongoing, independent, international commission of inquiry to investigate, in the occupied Palestinian territory, including East Jerusalem, and in Israel, all alleged violations and abuses of international human rights law leading up and since 13 April 2021.”

The resolution further requested the commission of inquiry to “investigate all underlying root causes of recurrent tensions, instability and protraction of conflict, including systematic discrimination and repression based on national, ethnic, racial or religious identity.”

The commission of inquiry was mandated to report to the Human Rights Council and to the General Assembly on an annual basis as from June 2022 and September 2022, respectively. 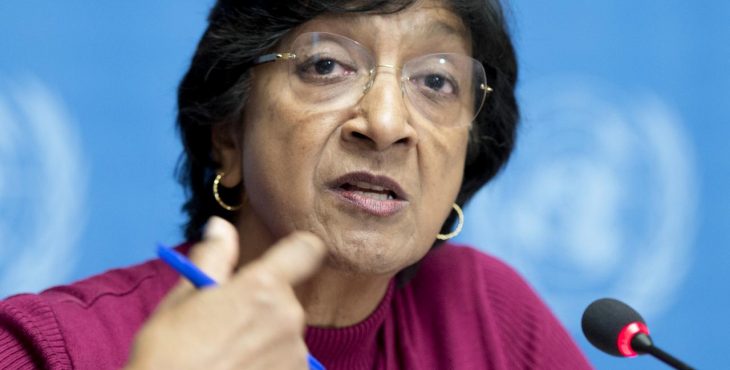 Following are key documents connected to the Pillay Commission.

Submissions to the COI 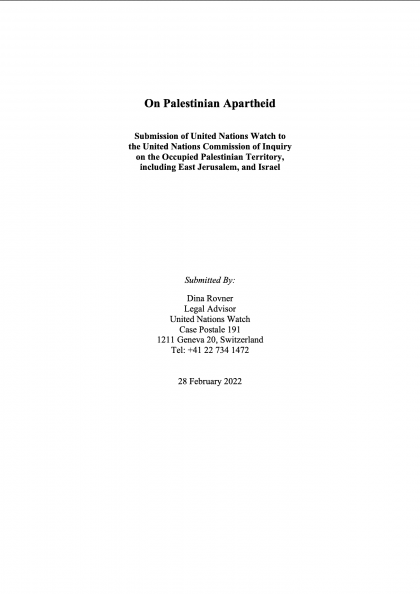 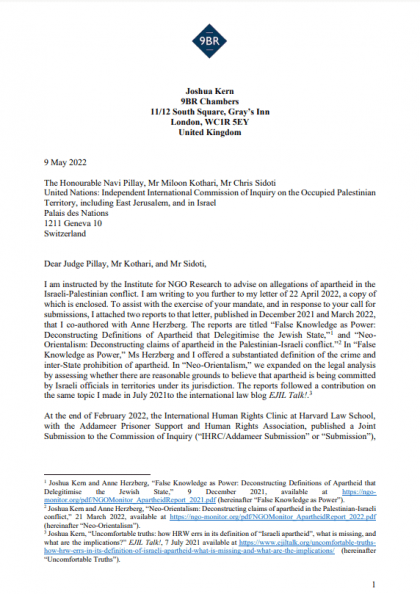 Submission to the 2022 UN Commission of Inquiry 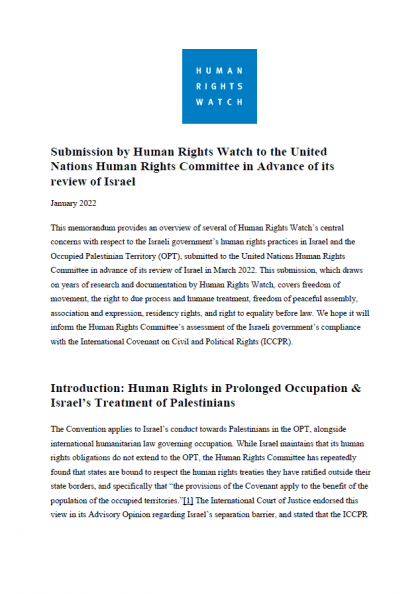 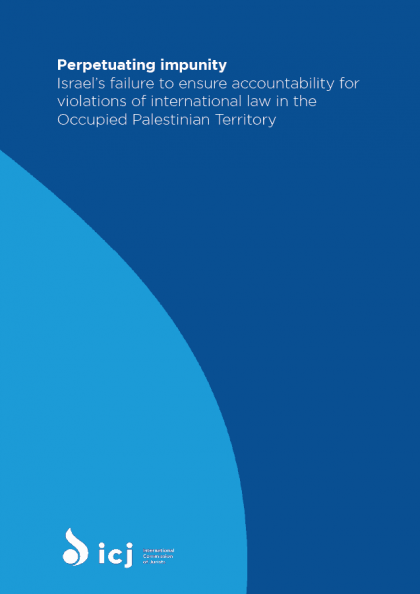 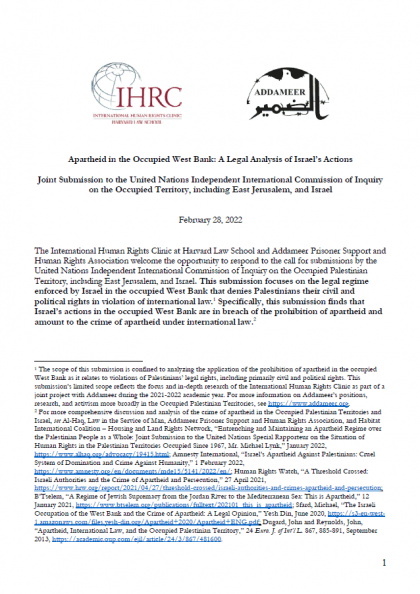 Apartheid in the Occupied West Bank: A Legal Analysis of Israel’s Actions 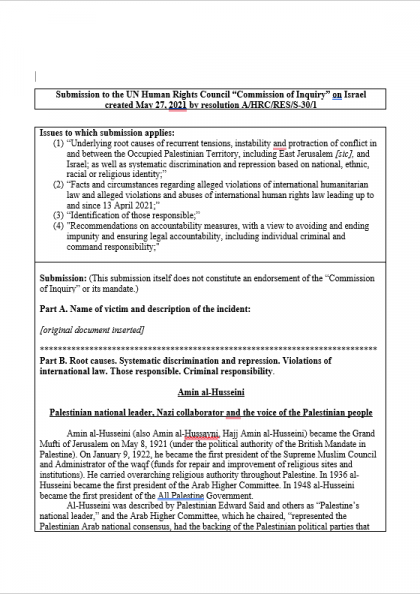 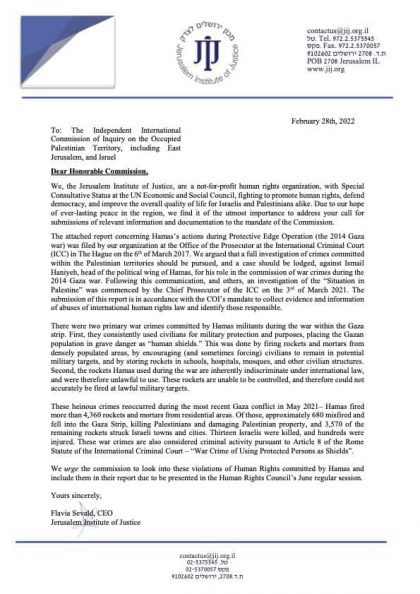 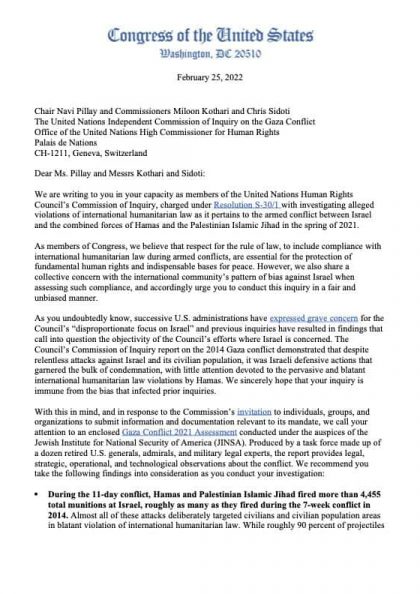 Members of US Congress

UN Watch’s 30-page legal brief submitted to the UN, detailing how Navi Pillay violated UN rules by failing to disclose numerous of her prior statements that directly prejudge the matters before the inquiry, and calling on her to recuse herself.

Submission on Palestinian
Discrimination against Israelis

UN Watch’ official submission to the Commission of Inquiry

On June 13th, the Human Rights Council will hear the first report of its new Commission of Inquiry which is investigating alleged war crimes during last year’s Hamas-Israel war, as well as alleged systematic discrimination in Israel and the Palestinian territories. To bring critical information to the public debate, UN Watch has invited experts to present testimony that will be submitted to the COI.

Today's report to the UN by the Pillay Commission condemns only Israel & underscores why the inquiry is a travesty of justice that is as fair and objective as the Spanish Inquisition. We drafted this resolution to begin the process to disband the inquiry: https://t.co/RZdOBkGw6f pic.twitter.com/5oNQjbH9w6

continues a longstanding pattern of unfairly singling out Israel and does nothing to establish conditions for peace.” /2

More on the UN’s Pillay Commission which reports today to the UNGA: https://t.co/lVRGTkoo2s pic.twitter.com/jTaE6SpVKs

Demand an end to the U.N.'s anti-Israel inquisition

Please sign our petition to terminate the U.N.’s Commission of Inquiry targeting Israel, and spread the word on social media

The U.N.’s new Commission of Inquiry against Israel, initiated by Pakistan and the PLO, is a travesty of justice. Despite U.N. rules requiring impartiality, each of three commissioners has a record of extreme anti-Israel positions. One of them was just condemned worldwide for making antisemitic remarks. It’s time to end the U.N.’s perpetual inquisition against the Jewish state.

Spread the word to demand justice

The UN's new Commission of Inquiry targeting Israel is a travesty of justice, a show trial sponsored by Pakistan & the PLO. Its members have long records of anti-Israel prejudice. One was just condemned for antisemitism. End the COI now. Sign the… Click To Tweet

Your help keeps us going!

UN Watch is an independent human rights group founded in 1993 in Geneva, Switzerland, receiving no financial support from any organization or government. We rely on the generosity of charitable donations. Thank you for your support.