Tribute to Morris B. Abram, Founder of UN Watch 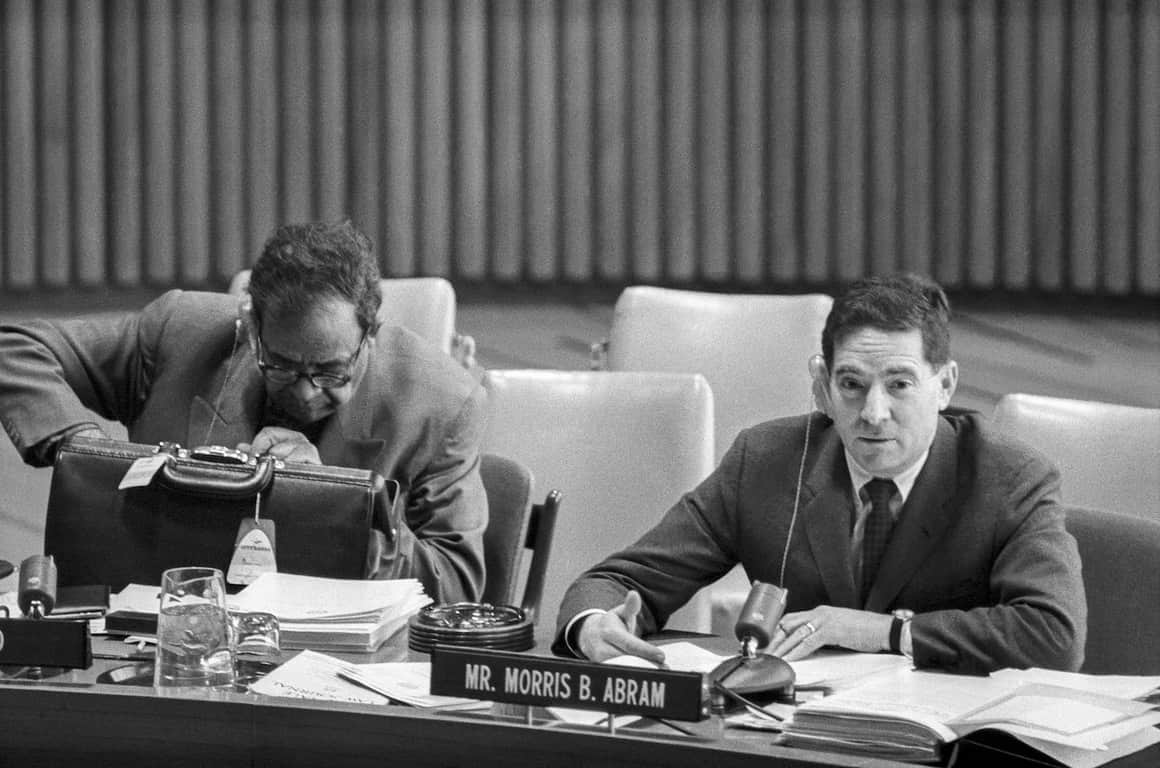 Morris Berthold Abram was a pioneer of the U.S. civil rights movement, serving as an attorney in crucial cases for the equality rights of African Americans, and a key drafter of the United Nations convention against racial discrimination.

He also became a champion of victims of human rights persecution across the globe over the course of a career of advocacy that lasted over five decades.

Abram, of Central and Eastern European Jewish ancestry, grew up in the small rural town of Fitzgerald in the southern U.S. state of Georgia. It was there that he first became acquainted with the evils of racial segregation, which would have a deep impact on the choice of his life’s work.

During his senior year at the University of Georgia, Abram was selected as a Rhodes Scholar to study at Oxford University beginning in the fall of 1939. With the program deferred by the outbreak of World War II, he attended law school at the University of Chicago. Entering the U.S. Air Force at the beginning of 1941, he earned the prestigious Legion of Merit for organizing a conference toward the end of the war to address the emotional, economic, and physical needs of returning servicemen.

The Rhodes Scholar Program resumed after the war, and Abram reclaimed his place at Oxford. On the recommendation of the University’s Regius Professor of Jurisprudence, he was invited one summer to join the staff of U.S. Supreme Court justice Robert Jackson, the American Chief Prosecutor at the Nuremberg trials of Nazi war criminals. Abram considered the trials a great advance in giving meaning to binding conventions relating to the rules of warfare. “My role in the Nuremburg proceedings was very minor,” he later wrote, “but the experience was a major turning point in my life.”

Returning to Georgia to practice law in Atlanta, he soon became involved in a legal battle that took him fourteen years to win. The case involved Georgia’s antiquated county unit system, the principal means by which the advocates of racial segregation disenfranchised black and other urban voters. Abram argued that the system was unconstitutional, since it violated the principle that each voter should have his vote count no more or less than any other—as he put it, “one man, one vote.”

The Supreme Court set the argument for January, 1963. The court clerk was informed by Abram’s longtime Atlanta law firm that he would be presenting the case. Abram invited the plaintiff to travel to Washington along with his family to hear the court’s oral argument. And in perhaps the most dramatic development in the case, Attorney General Robert F. Kennedy, took the unusual step of appearing personally alongside Abram to present the U.S. government’s position.

On March 18, 1963, the U.S. Supreme Court ruled in favor of Abram’s client James O’Hare Sanders, establishing the constitutional principle of “one person, one vote.” Seven days later, Abram received a letter of congratulations from Atlanta Superior Court Judge Jeptha Tankersley, who predicted that “As time goes by I believe that many people who have criticized you in the past will come to realize that you have done a great service for the people of this State.”

By the time the Supreme Court established the principle of “one person, one vote,” Morris Abram had already established himself as a leading figure in the Civil Rights Movement. In 1960, a sit-in protest at Atlanta’s largest department store led by the Reverend Martin Luther King, Jr. had led to his imprisonment. Abram became a key intermediary between the presidential campaign of Senator John F. Kennedy and the authorities in Atlanta to have Rev. King released from prison. That event was recalled years later by King’s father, Rev. Martin Luther King, Sr. in a letter to U.S. Senators endorsing President Ronald Reagan’s nomination of Abram to serve on the United States Civil Rights Commission. According to Reverend King, “Morris Abram, from the time he arrived in Atlanta in 1948, was in the forefront of the public battle against racial discrimination.”

After serving as the first general counsel of the Peace Corps in the Kennedy Administration, Abram was asked by President Lyndon Johnson in 1965 to co-chair the White House Conference on Civil Rights which included on its executive committee longtime civil rights leader and NAACP President Roy Wilkins. According to President Johnson, the objectives of the conference were “to help the American Negro fulfill the rights which, after the long time of injustice, he is finally about to secure” and “to shatter forever…the walls which bound the condition of man by the color of his skin.”

By then, Abram was already making his mark in the field of international human rights. In the early 1960s, U.S. Ambassador to the United Nations Adlai Stevenson asked Abram to serve as the U.S. representative to the Sub-commission for the Prevention of Discrimination and Protection of Minorities. There he clashed with his Soviet counterpart over the USSR’s state-sponsored anti-Semitism, and drafted a sweeping international treaty to outlaw segregation, hate groups and discrimination in public accommodations.

In 1964, he was elected president of the American Jewish Committee.

During the 1980s Abram assumed a leadership role advocating for the right of Jews in the Soviet Union to emigrate at a time when they faced official discrimination and repression.  Along with many civic and political leaders in the West, he believed the Soviet policy to be in violation of basic human and civil rights, such as freedom of immigration, freedom of religion, and the freedom to study one’s own language, culture and heritage. At a rally at the U.S. Capitol in the mid-1980s, Abram kicked off a national petition drive along with members of the U.S. Senate and House. Following his release from custody in 1986, leading political prisoner Anatoly (later Natan) Sharansky met with Abram, to whom he and his wife later expressed their hopes for the ultimate victory of the movement following the birth of their daughter in Israel.

Shortly thereafter, Abram found himself back at the United Nations, this time as the U.S. Permanent Representative in Geneva.  Upon the conclusion of his term, he was commended by President George H. W. Bush, who noted that “as our permanent representative, you helped to advance American interests during one of the most dramatic and challenging periods of change in history.”

In 1993, following his tenure as U.S. Ambassador, Abram decided to stay in Geneva. With the help of Edgar Bronfman and the World Jewish Congress, he founded United Nations Watch, the first non-governmental organization mandated to hold the United Nations accountable to the principles of its Charter.

At a December 1999 dinner in New York, sponsored by the American Jewish Committee to honor Abram’s lifetime achievements in the field of human rights, UN Secretary General Kofi Annan praised Morris Abram as “a global citizen of the first rank.”

Morris Abram’s legacy as a fighter for civil rights at home and for human rights abroad was best summed up in the tribute that accompanied his honorary degree from Long Island University in 1984:

“The fundamental principles of justice and humanity which must serve as guidelines in our daily living have been the focus of his career. Morris Abram has been endowed with the wisdom to perceive these precepts as an entitlement for all and as a trust to be cherished.”

Researched and written by David Lowe. Click here to pre-order David Lowe’s new biography, Touched with Fire: Morris B. Abram and the Battle against Racial and Religious Discrimination. 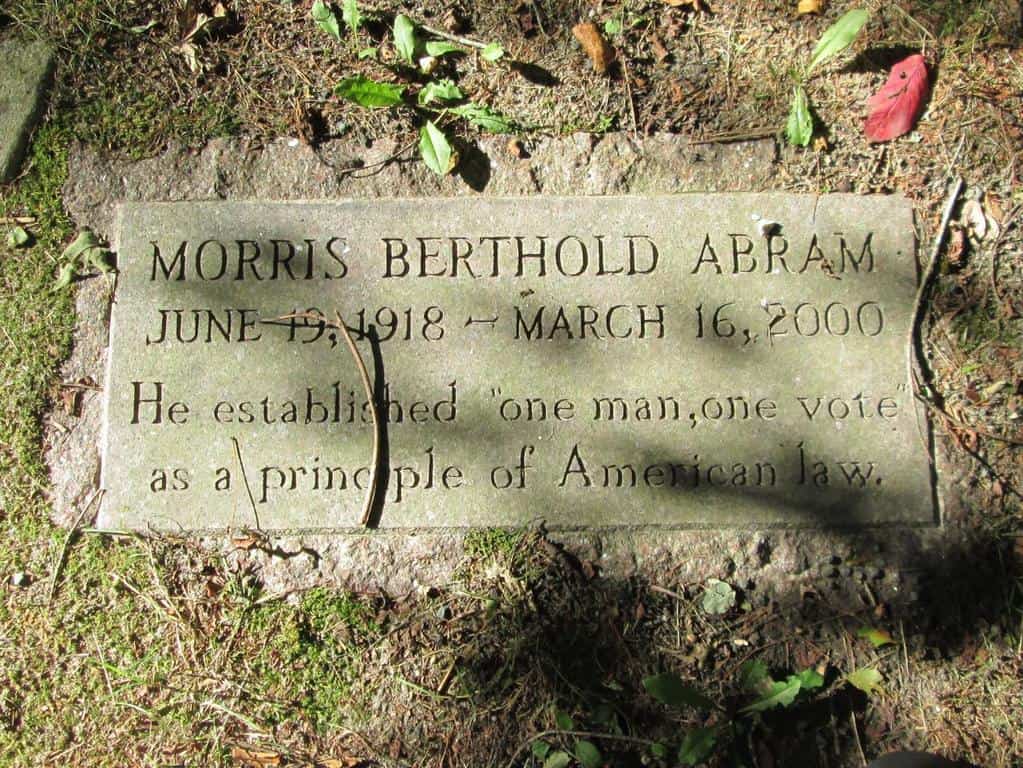