“Why Didn’t You Tell Me U.N. Council Declared Israel Guilty From the Start? Why Did You Humiliate Me?”

Geneva, September 29, 2009 — The U.N. Human Rights Council plenary witnessed a dramatic face-off today when the head of its controversial “fact-finding” mission on Gaza — in which Israel was declared guilty from the start — was unexpectedly confronted by one of his own witnesses.

In a surprise appearance arranged by the Geneva human rights organization UN Watch, Dr. Mirela Siderer — an Israeli doctor who was brutally disfigured in 2008 by a rocket attack fired from Gaza into her Ashkelon medical clinic — pointedly accused Goldstone of ignoring her July oral testimony in his report, and of failing to disclose material information concerning the prior statements of the Human Rights Council and panel members declaring Israel guilty in advance. Click for video. The speech was published in full today by Canada’s National Post, and covered widely in Switzerland, Israel and worldwide.

Sitting on the dais, Goldstone was visibly shaken by Dr. Siderer’s challenge and scrambled for a copy of her speech. His response to the plenary ignored 7 of her questions, and inadequately responded to the 8th. See full text and video below. For UN Watch’s play-by-play Twitter of today’s heated debate, click here.
***********

My name is Dr. Mirela Siderer. I am a gynecologist living in Ashkelon, Israel.

Judge Goldstone, in July you invited me to testify. I told you my story. I am known by my patients — including many women from Gaza. For me, every human being is equal.

On May 14, 2008, my life was changed forever. I was working in my clinic. Suddenly, the building was hit by a missile, fired from Gaza. I was terribly wounded. Blood was everywhere. My patient was also wounded, and more than 100 others. Next month will be my eighth operation.

Judge Goldstone, I told you all of this, in detail. I testified in good faith. You sent me this letter, saying, “Your testimony is an essential part of the Mission’s fact-finding activities.”

But now I see your report. I have to tell you: I am shocked.

Judge Goldstone, in a 500-page report, why did you completely ignore my story? My name appears only in passing, in brackets, in a technical context.

Why are there only two pages about Israeli victims like me, who suffered thousands of rockets over eight years?

Why did you choose to focus on the period of my country’s response, but not on that of the attacks that caused it?

Why did you not tell me that this council judged Israel guilty in advance, in its meeting of last January?

Why did you not tell me that members of your panel signed public letters judging Israel guilty in advance?

Judge Goldstone, you, too, signed such a letter, saying you were “shocked” about Gaza.

But where were you when Gaza attacked my medical clinic, in violation of international human rights and humanitarian law?

Where was this council?

Why were you all silent? 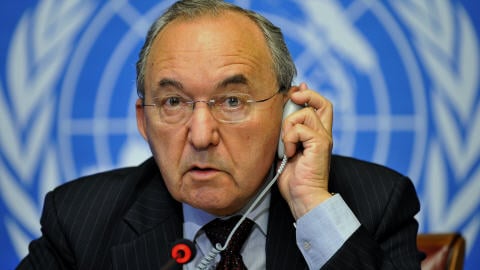 With regard to the statement made by Dr. Siderer, I’m clearly upset that she feels humiliated by the report. She was treated in the report in no way different to that of other victims who spoke to us. She was referred to in the report as one of the people who was injured as a result of a rocket attack on a shopping center in Southern Israel. The report also refers to the fact that the evidence of the people who gave evidence to us are available on the website of the OHCHR. It is there for anybody to see.

UN Watch Note: Dr. Siderer posed 8 simple questions. Goldstone avoided all except one, and on this was non-responsive and misleading. Dr. Siderer never said that she wasn’t “referred to,” but rather complained that her story was ignored, and that her name was mentioned only “in passing, in brackets, in a technical context;” and that this underscored how he overlooked 8 years of suffering of the rocket victims. Here is Dr. Siderer’s original testimony; here is Goldstone’s report. Search her name — it turns up but once, in passing, in par. 1640. Goldstone’ s claim that other witnesses were given similar treatment is manifestly false: see, e.g., the report’s repeated and in-depth discussion of witness Abu Askar. What is clear is that the report gives short shrift to Israeli suffering by its selective focus on the period of Israel’s response to the rocket attacks (Dec. 2008 and Jan. 2009), instead of to the attacks themselves (2001-2009).

GENEVA, June 14, 2021 — Nearly half the countries on the UN’s top human rights body—which the U.S. is now seeking to rejoin, and which opens a

Trending UN Watch tweets from May: World Health Organization elects Syria to its executive board, singles out Israel as a violator of health rights; dictatorships vote

Video of the following rare moment of truth at the UN is now being shared widely on YouTube, Facebook, Instagram and Twitter. Testimony by UN Watch’s Hillel Neuer at UNHRC 30th Special Session, May

Syria Elected to WHO Executive Board, Activists Outraged

GENEVA, May 29, 2021 — Syria was elected to the World Health Organization’s executive board on Friday, sparking outrage among human rights activists worldwide. “Syria’s election is a

GENEVA, May 26, 2021 — Ahead of tomorrow’s special meeting of the UN Human Rights Council on “the grave human rights situation in the Occupied Palestinian Territory,” convened