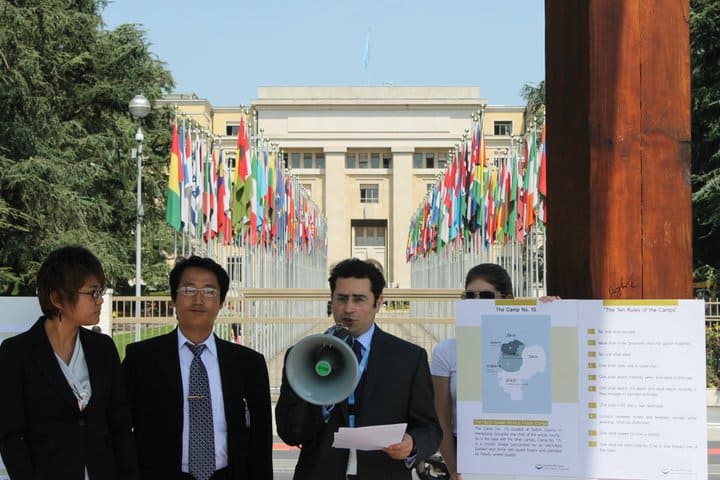 GENEVA – A North Korean defector and 28 advocacy groups led by the Geneva-based UN Watch are urging nations to protest Pyongyang’s chairmanship of the UN-backed Conference on Disarmament, the world’s only multilateral forum for nuclear arms diplomacy.

“Allowing an international outlaw to oversee international arms control efforts is just plain wrong,” advocacy group U.N. Watch’s director Hillel Neuer told reporters Tuesday in Geneva. “North Korea is a ruthless regime that menaces its neighbors and starves its own people, and should not be granted the propaganda coup of heading a world body dedicated to peace.”

Canada is boycotting the conference until North Korea’s presidency expires in September.

Former North Korean army captain Kim Joo-il, a defector now living in Britain, told the press conference organized by UN Watch that the regime is using its presidency “as propaganda for manipulating its residents,” to “perpetuate idolatry” of dictator Kim Jong-il and the “slavery” of North Koreans.

“Even if the presidency of North Korea of the Conference on Disarmament remains only for one hour — not even a week or a month — it is symbolic. The support of the international community is going to push North Korean residents even more into the hell that they are already living in right now,” he said.

The undersigned coalition of human rights and non-governmental organizations strongly protest North Korea’s presidency of the Conference on Disarmament (CD), for the reasons described below.  We call on all CD Member States to register their protest, as Canada has already done.  We also call on North Korea to hand over its presidency to a more suitable country.

The North Korean regime has no credibility on disarmament. Few if any countries pose a greater nuclear threat to the world than North Korea. The rogue regime, led by the unstable dictator Kim Jong-il, possesses an estimated dozen nuclear weapons combined with a record of hostile actions and threats to its neighbors and the world at large.  Moreover, as reported by a UN panel last year, North Korea has defied UN sanctions and used front companies to export nuclear and missile technology to the repressive regimes in Iran, Syria and Burma.

Just last week, the IAEA found that North Korea’s nuclear program remains a matter of “serious concern,” noting reports about the construction of a new uranium enrichment facility and a light water reactor.

Even for a short period, the symbolism of an international outlaw heading “the undisputed home of international arms control efforts”—as the CD was recently described by UN Secretary-General Ban Ki-moon—is terribly wrong.

North Korea has allowed millions of its own people to literally starve to death in order to pursue its illicit nuclear-weapons arsenal. North Korea is currently facing another famine. Yet history shows that aid may not even help. An estimated two million people were killed by famine in the 1990s, while Kim Jong-il and his regime kept foreign aid for themselves.

2.  North Korea is a Gross Violator of Human Rights

As one of the world’s worst violators of human rights, North Korea should not be granted the symbolic legitimacy of chairing a world body dedicated to peace.

Daniel Feng
Foundation for China in the 21st Century

Emina Burak
Children of the Earth

Crimes Against Humanity… But Keep Up the Good Work