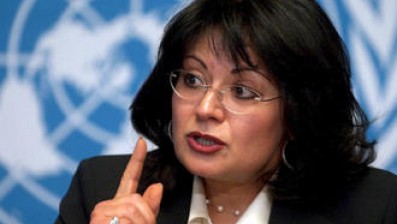 Where is Qaddafi’s Woman at the U.N.?

The appeal names Jean Ziegler, a member of the UNHRC Advisory Committee, who in 1989 announced the creation of the “Moammar Qaddafi Prize for Human Rights.” While Libya’s rights record was being reviewed last year by the UNHRC, a Libyan-funded group tied to Ziegler distributed within the UN a Ziegler-edited book comparing Qaddafi to French philosopher Jean-Jacques Rousseau.

Will Venezuela’s UN delegates defect as Libya’s did?