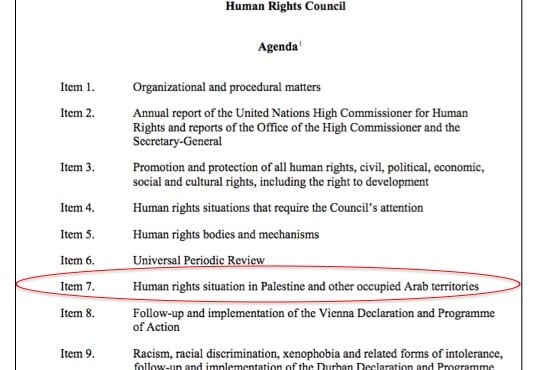 Unlike all other countries, which fall under the general Agenda Item 4, entitled “Human rights situations that require the Council’s attention,” Israel alone is singled out in a special debate, held at each of the Council’s three annual session, under Agenda Item 7, entitled “Human rights situation in Palestine and other occupied Arab territories.”

In a diplomatic Note Verbale that was submitted in October, yet only recently circulated as an official UN document in six different languages, Albania informed the UN rights office of “the reservations of Albania with regard to the discussions held under agenda item 7 by the Human Rights Council.”

While Albania recognized “the need to address the situation of human rights in Palestine,” at the same time it was “concerned at the way this issue is being addressed in the deliberations of the Human Rights Council,” and “would like to reiterate its preference that, in the future, this matter be discussed under agenda item 4,” in the general debate.

“By speaking out against selectivity, Albania upholds the United Nations Charter promise of equal treatment for all nations, large and small, and it echoes the principled objection expressed by UN Secretary-General Ban Ki-moon on the day after this biased agenda item was adopted back in June 2007,” said Hillel Neuer, Executive Director of UN Watch.

“When the Jewish state is subjected to a unique form of UN scrutiny not applied to any other country in the world — not even Sudan, Syria or North Korea — it has the whiff of bigotry,” Neuer added.

Importantly, Albania requested that its reservations be published as a UN document, ensuring that its statement would be widely seen.

“Only 38% of the UNHRC’s incoming 2016 membership are free democracies, noted Neuer, “the lowest level ever.”

This past year, Saudi Arabia was elected Chair of the Human Rights Council’s panel on naming human rights experts, a decision criticized around the world.