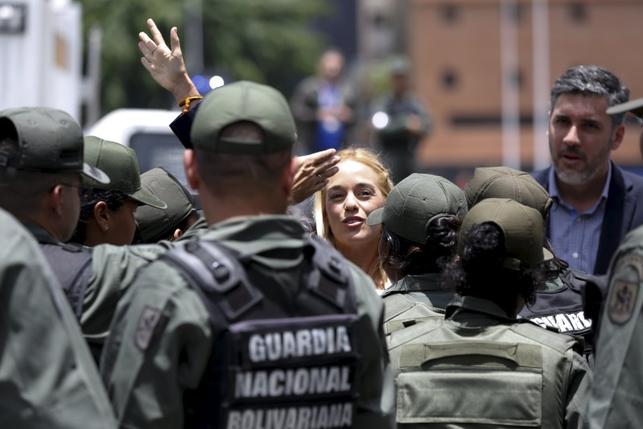 Lilian Tintori (C), wife of jailed opposition leader Leopoldo Lopez waves to supporters next to Venezuelan National Guards as she arrives at the courthouse to attend her husband’s trial in Caracas September 10, 2015. REUTERS/CARLOS GARCIA RAWLINS

GENEVA, September 11, 2015 – The United States, France, Germany and the United Kingdom were asked today to take action at a UN session that opens on Monday to suspend Venezuela from its membership on the world body’s 47-nation Human Rights Council, in reaction to the controversial Caracas verdict of 13 years in jail issued yesterday against opposition leader Leopoldo Lopez, and over other “gross and systematic violations of human rights.”

The text calls for the dispatch of an independent commission of inquiry to Venezuela, and for the suspension of Venezuela from the council, which has a precedent in the UNHRC’s 2011 ousting of Libya’s Gaddafi regime from its membership.

“Venezuela’s verdict, following a trial that denied basic due process to the defendant, is a travesty of justice that exemplifies the Maduro government’s gross and systematic violation of its own citizen’s basic rights and freedoms,” said Hillel Neuer, executive director of UN Watch.

“When the jailer of a human rights hero is allowed to sit as a world judge of human rights, it’s like having a pyromaniac as the town fire chief. It’s absurd, and casts a shadow upon the reputation of the United Nation as a whole,” said Neuer.

The U.S., France, Germany or the UK will now have time to consider and, if they choose, to revise the text, hold informal consultation with fellow member states and observer states, and then submit it formally to the council by September 28th. Voting on resolutions begin on Oct. 1.

Venezuela would likely be backed by Russia, China, Cuba, and several other dictatorships on the council, but Neuer said that a majority or plurality could be found “if democracies act in concert.”

A decision of the Council to suspend Venezuela would then need to be ratified by the UN General Assembly in New York, which is likely to ensue once the action enjoys sufficient support from the Geneva-based Council.

The suspension could later be reversed if Venezuela is found to be in compliance with the resolution and its obligation as a UNHRC member to uphold “the highest standards of human rights.”

UN Watch and the Situation of Human Rights in Venzuela

UN Watch was founded in 1993 by the late civil rights leader Morris Abram, and has been a leading voice for human rights in Venezuela, providing a global platform to relatives of Mr. Lopez, to former political prisoners, dissidents, human rights advocates, student leaders, and democracy protest organizers. UN Watch organizes the annual Geneva Summit for Human Rights and Democracy with 20 other NGOs.