GENEVA, September 22, 2014 – A Greek Orthodox priest from Nazareth who is one of the most controversial public figures in Israeli Arab society will tomorrow address the 47-nation UN Human Rights Council. 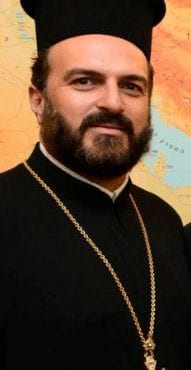 In a special debate on racism, Father Gabriel Naddaf will testify on the situation of Christian minorities suffering under Muslim extremists in the Arab world, where a Christian is killed every 5 minutes because of their faith.

Because of his efforts to encourage Arab Christian integration into mainstream Israeli society, Father Naddaf, head of the Greek Orthodox Church in Yafia, near Nazareth, has been denounced by Arab members of the Israeli Knesset and receives regular threats of intimidation against himself and the safety of his family.

The Greek Orthodox patriarchate in Israel banned Father Naddaf from entering Nazareth’s Basilica of the Annunciation, and has repeatedly threatened to dismiss him from his post in Yafia, because of his public statements against the treatment of Christians in the Arab world.

Bio: Fr. Gabriel Nadaf was born in 1973 in Nazareth, a town with a mostly Muslim population and a Christian minority. He served as a priest in the church at Mary’s Well in Nazareth since 1995, and belongs to the Greek Orthodox Patriarchate in Jerusalem, Israel’s second largest Christian community. He served as a speaker and as a judge in the Court of the Church Patriarchate in Jerusalem.He studied Theology and the Psychology, and is married with two children.