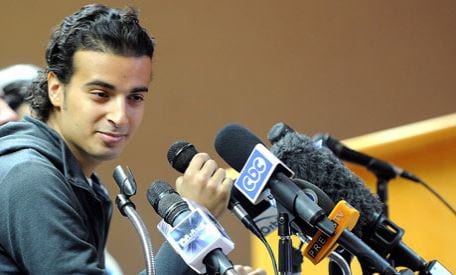 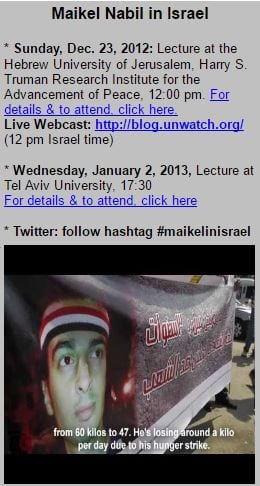 GENEVA, Dec. 23 – As reported this weekend by the New York Times, Maikel Nabil, one of Egypt’s most famous human rights dissidents and democracy bloggers—a former political prisoner who is also his country’s most outspoken supporter of peace with Israel—has arrived in Jerusalem on a peace-building mission, where he will deliver university lectures, meet with leading public figures and peace activists, and visit the Palestinian territories. (See M. Nabil, “Why am I pro-Israel?”)

Mr. Nabil’s trip is organized by UN Watch, a Geneva-based non-governmental organization that works at the United Nations to promote universal human rights and Arab-Israeli peace. Founded in 1993, UN Watch is headed by Ambassador Alfred H. Moses, who served as Bill Clinton’s Special Presidential Emissary for the Cyprus Conflict.

“UN Watch is honored to facilitate this peace-building mission, which couldn’t come at a more vital time for the region,” said executive director Hillel Neuer.

“After years of calling for peace,” said Mr. Nabil, “I have realized that practicing peace is more important than talking. My visit is a message from the Egyptian peace community that we have had enough violence and confrontation and we want this to end.”

Neuer called Mr. Nabil “a brave student who sacrificed his freedom—and almost his life—for the cause of democracy, tolerance and peace between Arabs and Israelis. He is a true hero who inspires hope around the world, a 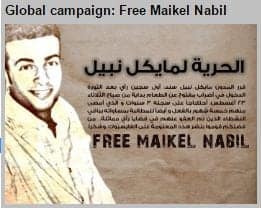 Mr. Nabil was a key figure in Egypt’s Tahrir Square revolution. He was convicted for the crime of “insulting the Egyptian army” and thrown into prison with a three-year sentence.

In jail, Mr. Nabil was subjected to beatings, torture and abuse. Ten months later, on January 24, 2012, after a “Free Maikel” Twitter campaign captured the support of millions worldwide, and after his 130-day hunger strike, Mr. Nabil was released.

In a Times of Israel article announcing his trip, Mr. Nabil highlighted his special relationship with UN Watch.

“UN Watch,” he said, “the human rights organization based in Geneva, played a role in defending my freedom when I was imprisoned in Egypt last year for 10 months for defending human rights. Its director, Hillel Neuer, is known for his scathing attacks on dictatorships in the UN Human Rights Council. He is a very brave person, and a good friend.”

UN Watch led a campaign of thirty human rights groups and actvists for Nabil’s release, petitioning top UN officials and the Egyptian government, sparking wide coverage in the Egyptian press, and in international media such as Le Monde.

Shortly after his release, UN Watch brought Nabil to testify before the United Nations Human Rights Council, where he slammed Egypt’s regime. Click here for video and text.