The Top 100 Most Influential Jewish People in the World 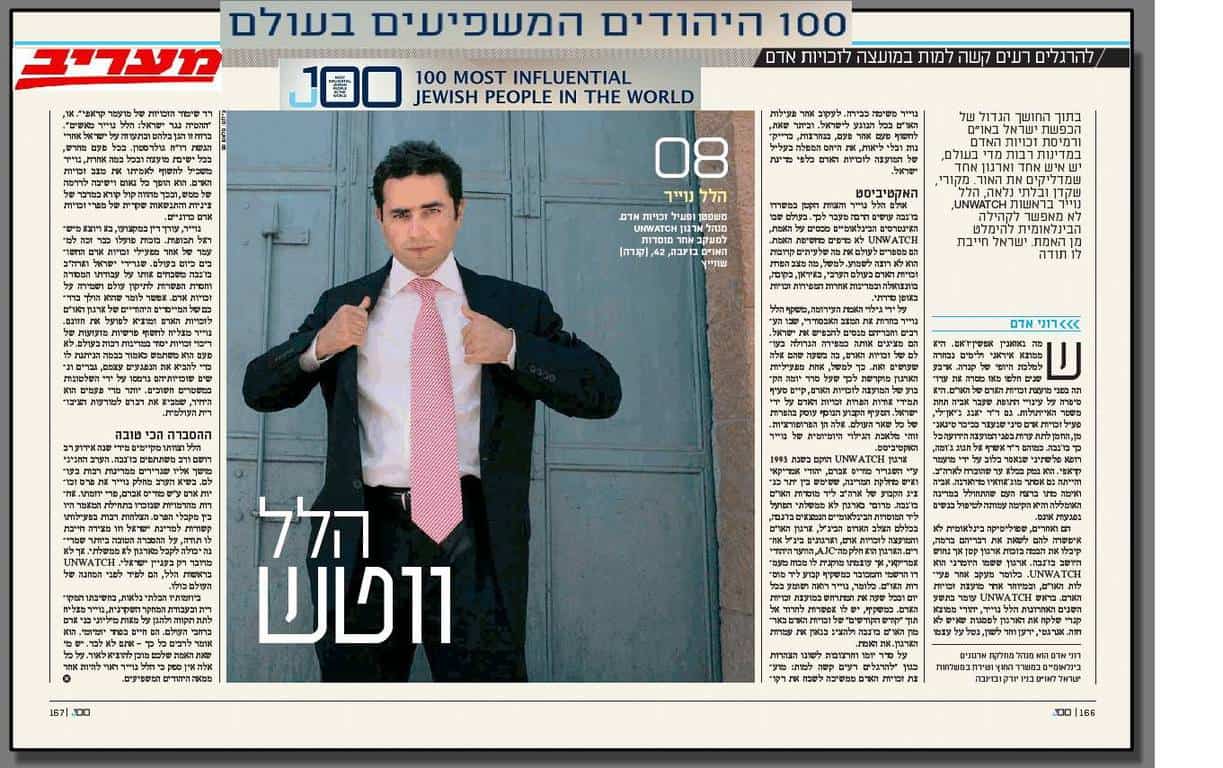 The Top 100 Most Influential Jewish People in the World

‘Metaknei Olam’: Top 10 Who are Making the World A Better Place

Amid the great darkness cast by the defamation of Israel at the U.N., and by the trampling of human rights worldwide, there is one man and one organization that are lighting a candle. Original, diligent, and tireless, Hillel Neuer at the lead of UN Watch does not allow the international community to escape the truth. Israel owes him a debt of gratitude.

Her name is Nazanin Afshin-Jam. Born in Iran, she would later be chosen as Miss Canada. Four years ago, she testified before the United Nations Human Rights Council (HRC) in Geneva, describing the horrendous torture suffered by her father under the Ayatollahs’ regime.

Dr. Yang Jianli, a Chinese human rights activist arrested during the Tiananmen Square massacre, was also brought to testify. Joining them was Ashraf Al-Hajuj, a Palestinian doctor living in Libya who was arrested by Muammar Qaddafi, and tortured in prison for years.

And there was Esther Mujawayo from Rwanda. Her mother and father were killed in the genocide of 1994. Her response was to create an organization dedicated to healing Rwandan women victimized by rape during the horrors.
They and others ignored by the international community were given a platform thanks to a small but determined organization in Geneva, Switzerland, whose ambitious name is UN Watch. The group monitors the activities of the United Nations, and especially its Human Rights Council.
For the past nine years, UN Watch has been led by Hillel Neuer, a Canadian Jew who has taken the organization to unexpected heights.
Energetic, knowledgeable, and sharp-tongued, Neuer has taken on a daunting task: to keep watch over all UN activities related to Israel. More importantly, to expose— time after time, with tireless determination and precision—the Human Rights Council’s blatant discrimination against the Jewish state.
The Activist

But Hillel Neuer and the tiny staff at his Geneva office do much more. In a world where international interests often cover up the truth, UN Watch relentlessly exposes it. The organization tells the world what it often doesn’t want to hear. Such as the situation of human rights violations in the Arab world; in Iran; in Cuba; in Venezuela; and in many other countries that systematically abuse human rights.
By uncovering the naked truth, Neuer sharply exposes the absurd situation prevailing at the HRC, whereby Arab states and their allies routinely slander Israel, presenting it as the world’s worst violator of human rights—even as, in truth, it is they who are the violators.
Thus, for example, one sphere of focus for UN Watch concerns the fact that the HRC features a permanent agenda item on human rights violations allegedly committed by Israel—and another agenda item on violations by the entire rest of the world. These are the proportions. And this is the daily task of Hillel Neuer.
UN Watch was founded in 1993 by ambassador Morris Abram, an American Jewish diplomat, who served, among various postings, as the United States permanent representative to the UN in Geneva.
UN Watch is a non-governmental organization that works alongside the numerous international agencies located in the Swiss city, including the International Red Cross, the UN and its Human Rights Council, and other world bodies.
The power exercised by UN Watch accrues to it by virtue of its status as an official and distinguished permanent observer of the UN.
That is, every day, and at every moment, Neuer sees and hears everything that takes place at the HRC. As an observer, he has the ability to penetrate within the human rights “holy of holies” situated at the core of the UN temple in Geneva, and to proudly present his organization’s positions. The truth.
The issues he must confront are summed up in pointed headlines such as, “Old habits die hard: UN human rights council to praise Qaddafi’s human rights record,” and “UN bias against Israel, alleges Hillel Neuer.”
In this spirit, Neuer powerfully and passionately defended Israel following the UN’s publication of the Goldstone Report.
Time after time, at every session of the UN Human Rights Council and at every other available forum, Neuer intelligently exposes the truth about the global state of human rights. He turns every speech and session into a real drama, emerging as a lone voice speaking out in the wilderness of cynicism and false arrogance of serial human rights violators.
A lawyer by profession, he visits Israel often. By virtue of his work, Neuer has already achieved recognition as one of the most important human rights activists in the world today. The ambassadors of Israel and the United States in Geneva praise him for his dedicated and uncompromising work to protect human rights and make the world a better place.
In many ways, Neuer follows in the footsteps of the Jewish founders of the United Nations Commission on Human Rights, and puts their vision into action. He has succeeded in exposing many shocking incidents of gross human rights abuses worldwide.
On numerous occasions, as noted above, Neuer passes the podium that is given to him over to the victims themselves—men and women whose human rights have been trampled by benighted regimes. And, too often, he is the only one bringing their cause to the world’s attention.
The Best Hasbara

Every year, Hillel and his staff hold a highly impressive and well-attended gala dinner in Geneva. The event attracts ambassadors from many countries around the globe. At the height of the evening, Neuer awards the Morris B. Abram Human Rights Award, which he initiated. Several of the individuals mentioned at the beginning of this article are among its laureates.
Many of Neuer’s successful accomplishments have been for the cause of Israel, which owes him a debt of gratitude for the best Hasbara a country could receive from a NGO.
But it’s not just about Israel. UN Watch under Neuer’s leadership is a torch leading the camp of the entire free world.
Through his indefatigable initiatives, his original thinking, and his painstaking research, Neuer succeeds in giving hope to and defending hundreds of millions of people around the world. They live in daily fear. He says to so many of them: you are not alone. There is someone willing to bring your truth to light.
For all of the above, there is no doubt that Hillel Neuer deserves to be one of the 100 most influential Jewish people in the world.