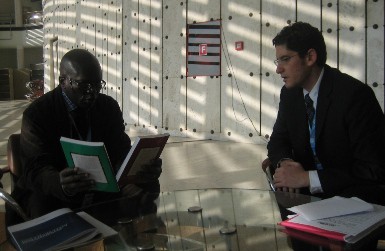 Abuja, Nigeria, August 26, 2008 — Geneva-based human rights group UN Watch expressed alarm over the declaration adopted today by an African regional meeting in Abuja, Nigeria, which will now shape the UN world conference on racism to be held in April.

“The declaration (CLICK FOR TEXT) fails to address racial and ethnic crimes committed by Sudan, tramples international human rights guarantees on free speech, places Islam above all other religions, and targets Israel alone, implying that it is uniquely racist,” said UN Watch executive director Hillel Neuer. “Regrettably, Durban II is looking more and more like the original Durban debacle of 2001.”

The stated objectives of the African regional conference, which opened Sunday and closed today, were to review regional implementation of the 2001 Durban declaration, and map the way for the UN’s Durban Review Conference on racism set for Geneva in April. But the declaration adopted today “failed to review any African country’s actions, and its inflammatory provisions now threaten to derail the world conference in April,” said Neuer.

The Canadian government is boycotting the April meeting and its preparations, saying it will “not be party to an anti-Semitic and anti-Western hatefest dressed up as an anti-racism conference.” French President Sarkozy and cabinet ministers from Britain and the Netherlands have warned that a breach of red lines could also trigger their boycott of the 2009 meeting in Geneva. French Minister Rama Yade repeated the caution in a statement this month to the French parliament.

“By failing to review the performance of African countries on racism and related intolerance, the conference is ignoring its primary mission, and squandering a golden opportunity to help Africa’s many victims of racism and xenophobia,” said Neuer.

“Apart from UN Watch’s plenary speech on Sunday, neither the conference nor its final declaration addressed the Sudanese government’s crimes against humanity in Darfur, including the ethnic killings of at least 200,000 black Africans, mass rape, and the displacement of over 1 million men, women and children,” said Neuer.  When UN Watch representative Leon Saltiel addressed the Darfur atrocities in his speech to the Abuja conference on Sunday, Sudan immediately interrupted with an objection — supported by Algeria and Morrocco — and chairman Martin Uhomoibhi of Nigeria ruled that country situations could not be mentioned.

“Moreover, the text fails to review the xenophobic attacks that recently broke out in South Africa — the leading organizer of the Abuja meeting and the overall Durban process — where foreigners, notably from Zimbabwe and Mozambique, were targeted in May during a wave of anti-immigrant attacks in which at least 62 were killed and tens of thousands were displaced,” said Neuer. “Nor does the text review the ethnic crimes in Kenya this year that killed 1,000 people, displaced another 600,000 and burnt down 40,000 buildings, in an outburst of tribal bloodletting. Millions of African victims of xenophobia — present and future — are ill-served by the conference’s grant of impunity for racial or ethnic crimes committed in African countries.”

The new text calls upon states to avoid “inflexibly clinging to free speech in defiance of the sensitivities existing in a society and with absolute disregard for religious feelings.” Other provisions in the text on “incitement to religious hatred,” said Neuer, “mirror efforts by Islamic states at the UN Human Rights Council to insinuate Islamic anti-blasphemy prohibitions into international law. Yet UN expert on religious freedom Asma Jahangir and other international human rights experts have expressly opposed ‘defamation of religion’ resolutions, which seek to alter international human rights law by defining religions — instead of individuals — as the bearers of rights.”

The declaration’s attack on free speech contravenes the Article 19 guarantee of freedom of expression of the Universal Declaration of Human Rights, whose 60th anniversary the UN will be celebrating next week with a major gathering at UNESCO headquarters in Paris. (At the event, UN Watch will be chairing a NGO panel discussion on the UN Human Rights Council.)

“The language goes far beyond the recognized norms for balancing prohibitions of racial hatred with respect for free speech, which is the lifeblood of democracy. If the right to express one’s beliefs — to question the dogmas of the day in society, law, politics, art, science, and, yes, religion — is to be restricted by the ‘feelings’ and ‘sensitivities’ of others, this will mark the end of free speech as we know it,” said Neuer.

The text’s special emphasis on Islamophobia (paragraph 20) “seeks to impose a hierarchy of religions, placing adherents of Islam above all others,” said Neuer. “This is contrary to the basic principles of equality enshrined in the UN Charter and the Universal Declaration of Human Rights, and undermines the very premise of the global struggle against racism.”

Conference Singled Out Israel for Opprobrium, Threatening to Repeat Durban Debacle of 2001

The declaration makes only one reference to a country situation, “reiterat[ing] its concern about the plight of the Palestinian people under foreign occupations.” Neuer asked, “Why is a non-African situation mentioned in a declaration about Africa, one that references neither Sudan’s racist killings, nor any other country in Africa?”

“The special reference to the Palestinian issue implies that Israel is practicing racism. This reverts to the discredited rhetoric of the UN’s 1975 “Zionism is Racism” resolution, sponsored by the Soviet and Arab blocs, which was repealed by the United Nations in 1991, and which has since been repudiated by its highest officials,” said Neuer.

“Portraying Israel’s conflict as racial is more than political mischief; it’s an attempt to dehumanize Israelis and their supporters as uniquely evil. We regret that African states today allowed the extreme political agenda of certain Middle Eastern governments to undermine their legitimate cause.”

The UN, however, today tried to offer a different interpretation. “It is only one paragraph that mentions the Palestinians, so the interest of Israel was never badly damaged,” Ibrahim Wani, from the office of the U.N. High Commissioner for Human Rights, told Reuters, after the 3-day talks in Abuja.

UN Watch participated at the African conference as an international non-governmental organization. The plenary speech delivered by UN Watch representative Leon Saltiel on Sunday (see below) was interrupted by Sudan, after he addressed the situations in Darfur and Zimbabwe, and described Libyan hypocrisy.

We assemble here in the Nigerian capital of Abuja, in the heart of Africa, to discuss how to fight racism, and to prepare for the Durban Review Conference that will take place in April 2009.

That I have come here from afar is testament to the great importance that UN Watch attaches to the African cause, to the global struggle against racism, and to the outcome of this gathering.

UN Watch has always stood in solidarity with the African people in their struggle for human rights, equality and freedom.

A half century ago, UN Watch founder Morris Abram was a leading advocate in the American civil rights movement led by Reverend Dr. Martin Luther King. It was Mr. Abram who won the 1963 U.S. Supreme Court case that recognized African-American voting rights, under the principle of “one person, one vote,” and who went on to head the United Negro College Fund.

In 1993, guided by the same vision of human rights and equality, Morris Abram founded UN Watch.

Since then, we have been a leading voice at the United Nations for victims of persecution—for Africans in places like Darfur and Zimbabwe, as for millions of other victims of racism and intolerance around the world.

It is with this legacy, and with these principles, that UN Watch urges this conference to rise to the occasion.

Let this African gathering give voice to all who suffer from racism, persecution and intolerance.

Let us promise that the crime of slavery shall never be forgotten. That men and women everywhere should be treated with basic dignity and equality.

Let us be true to the universal principles of human rights that underlie the struggle against racism.

We will only advance toward these goals if we stay on the true path—by avoiding dangerous diversions, and by remedying the wrongs of the past. We must prevent a recurrence of the foul actions of 2001, which paradoxically turned a conference on racism into a platform for racist hatred and anti-Semitism.

Let us oppose the campaign by certain governments and lobby groups to distort the language of human rights for a narrow and extreme political agenda, which only distracts from and harms the African cause.

Let us ensure that our outcome document—which will influence the final declaration of the April conference in Geneva—will neither single out nor demonize any country or people.

Finally, let us keep this conference a serious one. Its credibility is at stake when countries preach one thing while blatantly practicing the very opposite.

Consider, for example, the official submission of Libya that is before us today. The Libyan government speaks of racism against the African people and how it confronts, and I quote, “[a] new form of racism related to house helpers [and] (maids).”

Yet just last month, when Mr. Hannibal Qaddafi was arrested in Geneva for the crime of beating his African maid and African house-helper,

[At this point in the speech, Sudan interrupted with an objection, supported by Morocco and Algeria.]

Libya fully supported his actions. Worse, Libya then punished one of these African victims by kidnapping his mother. With this same country being the chair of the committee organizing the Durban Review Conference, what should the world think?

The eyes of the world are upon us. When history is written, let it be recorded that in Abuja, in August 2008, the struggle against racism was advanced, and not harmed; promoted, and not politicized. We owe its victims—in Africaand around the world—no less. 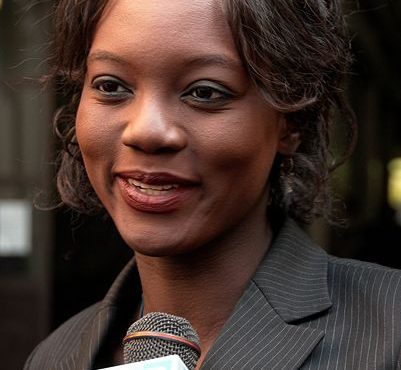 Writing in reply to a parliamentary question, Rama Yade, France’s Senegalese-born Foreign Affairs and Human Rights Secretary, warned that France will walk out of the UN’s Durban II process if it veers off track.

“France will not maintain its participation at any price,” said Yade in her response published on August 5. “The President said at the dinner organized by CRIF, and the Secretary of State for Foreign Affairs and Human Rights herself said to the UN Human Rights Council: France will remain engaged in this process only if the review conference does not depart from its assigned objectives.” Read More…

The UN Human Right Council’s expert on Palestine yesterday praised a boat trip to Gaza by pro-Palestinian campaigners, without revealing his own close ties to the group. Falk is best known for his repeatedly expressed support for the conspiracy theory that the terrorist attacks of 9/11 were an “inside job” by the Pentagon.
Read More…

Even with the Qaddafi servant-beating episode still unresolved, the Libyan human rights prize went ahead and announced its annual award. The International Committee for the Al-Gaddafi Award for Human Rights awarded its prize for 2008 to former Maltese prime minister Dom Mintoff, theTripoli Post reported.

“In their appreciation of those honourable leaders of the North who have stood by justice and rights and who defended the causes of oppressed peoples, especially in Palestine and Iraq, the International Committee of Al-Qathafi Award for Peace of 2008 is awarded to the European leader and former Prime Minister of Malta,” the committee said…  Read More…