The following information was released by the United Nations: 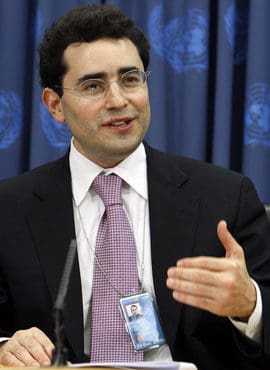 NEW YORK, Dec. 9, 2008 — The Executive Director of UN Watch said today that, for proponents of human rights worldwide, tomorrow’s commemoration of the sixtieth anniversary of the Universal Declaration of Human Rights would be marred by the “state of crisis” plaguing the United Nations Human Rights Council, which was in danger of seriously eroding the fundamental freedoms and principles it had been established to promote and protect.

“Sixty years after the founding vision of Eleanor Roosevelt, Rene Cassin and Charles Malik, the United Nations human rights system as a whole finds itself in a state of crisis,” Hillel Neuer, UN Watch’s Executive Director, said at a Headquarters press conference to launch the Geneva-based non-governmental organization’s new report, Eleanor’s Dream: The State of Human Rights at the United Nations, 1948-2008.

He said the two-year-old Council had been created to replace the much maligned Human Rights Commission, which had been routinely criticized for being politicized and acting arbitrarily. “Regrettably, with few exceptions, the opposite has happened.” The Council was “dominated by an alliance of repressive regimes, including China, Cuba and Saudi Arabia”, and had acted to systematically undermine core principles and effective mechanisms created by the generation of Eleanor Roosevelt and those that had followed. The body’s democratic members had failed to make better use of its innovative mechanisms, including the Universal Periodic Review and the power to convene “special sessions”.

Citing the Council’s “distressing” voting record, he noted that this year, the Geneva-based body had overturned the protection of freedom of expression — “the lifeblood of any democracy” — by revising the mandate of the expert to now police individuals who dared abuse freedom of speech and defamed religions, chiefly, Islam. That change had been sponsored by Islamic States with Cuban support and was part of the “campaign at the United Nations by the Islamic States to restrict freedom of speech in the name of prohibiting any form of expression that is deemed to offend Islamic sensitivities”. Such moves actually hurt people in the Middle East, including human rights defenders, bloggers and others who dared to oppose State orthodoxies.

In addition, he said, the Council had eliminated human rights monitors in Belarus, Cuba, Liberia, Democratic Republic of the Congo and Darfur. Moreover, UN Watch, which monitors the performance of the United Nations by the yardstick of its own Charter, feared that the mandate of the Council’s expert on Sudan — recently renewed for a mere six months — “might also be on the chopping block” in 2009.

He recalled that in March the Council had heard the expert on the Democratic Republic of the Congo report systematic abuses in the eastern part of that country, including massive human rights violations against women, and its response had been to eliminate that mandate. “Now, here we are in December and we see what has happened [] where hundreds of thousands of victims in the Congo have been murdered and raped.”

Mr. Neuer said: “So as we celebrate this historic day and seek to strengthen human rights, we need to acknowledge the current situation at the United Nations,” adding that the UN Watch report had found that, among other things, only 13 of the organ’s 47 members had positive voting records on resolutions speaking for victims of human rights abuses. Further, Freedom House had revealed that 24 of the 47 members, or 51 per cent, fell short of basic democracy standards. Also disturbing was the fact that 74 per cent of the Council’s membership had voted to restrict the independence of the United Nations High Commissioner for Human Rights.

He said the Council had consistently failed to address the world’s worst human rights violations, pointing out that, of the 20 worst abusers cited by Freedom House in its annual survey, only Myanmar and the Democratic People’s Republic of Korea had been censured. “While it did adopt resolutions on Sudan, these were non-condemnatory, weak and ineffective.” Some had even praised Sudan for its “cooperation”.

“So it would appear that the spoilers have it,” he said, stressing that, while nearly half of the Council’s members were free democracies, only a minority of them — about a dozen — had voted consistently in defence of the values and principles that the Council was supposed to promote. “Instead, the Council has been increasingly dominated by a brazen alliance of repressive regimes seeking not only to spoil needed reforms, but to undermine the few meaningful mechanisms of UN human rights protection that already exist. Their goal is impunity for systematic abuses.”

At the same time, he said, UN Watch was also troubled that too many democracies had been “going along with the spoilers” out of loyalty to regional groups and other political alliances. About 80 per cent of the Council’s resolutions condemned Israel, and while that country needed to be held accountable for its actions, resolutions that were “egregiously one-sided and legitimize acts of terrorism [] are unhelpful”.

With all that in mind, he set out several recommendations, stressing that countries that cared about human rights still had mechanisms they could use, including calling the Council into special sessions to examine human rights situations. Agreement by only one third of the organ’s membership — just 16 countries — was needed to call such a session. “Democratic countries ought to be calling special sessions, especially since this is one of the innovations of the reformed Council”, as a way to turn a spotlight on abusers and provide a voice for victims.

He said the Universal Periodic Review, another innovation that offered some hope, should also be put to better use. Unfortunately, UN Watch had seen that mechanism used by Council members to praise their allies. States should use their time to pose far tougher questions to those under review about their human rights situations. While it was difficult to imagine any changes in the voting patterns of “those seeking to undermine or overturn key human rights instruments” in the near future, it was critical for those States that cared about human rights to lobby “those that are in the middle”.

Responding to questions, he said United States President Elect Barack Obama had made it clear that his Administration would be “re-examining US engagement with the Human Rights Council”. The United States had not been a member for the past two years, but under the right conditions it could take a more active role in the Council. Still, if the organ continued its current trend, the European countries might pull back their participation. The Council would undergo its five-year review in 2011 and at that time it would be critical to reaffirm commitment to human rights principles and the mechanisms for implementing them. “We cannot let human rights be forgotten or undermined.”

Asked about the possibility of amending the Universal Declaration, especially to enshrine the protection of minorities, he said that, while that might seem like a good idea, currently, no attempt to open up the Declaration would yield positive results. Indeed, if the very same text were to be introduced for adoption today, the outcome would be far from clear. While there might be one or two amendments that would be worthy, he was “gravely concerned” by the current tenor of the arguments against the Universal Declaration, the International Criminal Court and other mechanisms and instruments promoting freedom of speech and combating impunity.