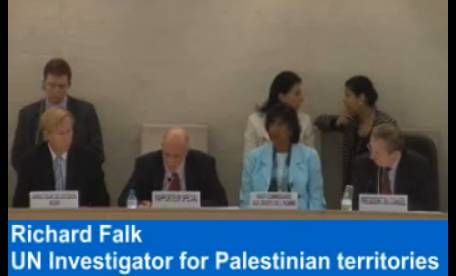 “The spectacle of a people under siege, as has been the case now for over 30 months in the Gaza Strip, has deepened this sense that there exists some responsibility for people everywhere to take appropriate, non-violent action,” said Falk.

His 18-page report focused on the overall situation of Palestinians in the territories and included comments on Gaza and the boycott initiatives against Israel.

“Civil society’s global Boycott, Divestment and Sanctions (BDS) campaign, aimed at bringing non-violent economic and social pressure to bear to end the Israeli occupation, is the outgrowth of these sentiments [against the Gaza siege], and it has been expanding at a rapid rate during the last few years,” Falk said.

This movement resembles the antiapartheid movement which transformed South Africa in the 1980s, he added.

Civil society boycotts are “a central battleground in the legitimacy war being waged by and on behalf of the Palestinians,” wrote Falk.

Mr. Falk, in sections 5 and 7 of your report, you endorse those who, “wage a legitimacy war” against Israel. Similarly, on September 19th you wrote that the Goldstone Report was a key weapon in “what I have called the Legitimacy War.”

Then it is true, is it not, that what you advocate is not opposition to this or that Israeli practice, but rather a war of legitimacy against a UN member state? Could you tell us, sir, how you justify this under the United Nations Charter?

In this regard, on May 3rd Judge Goldstone spoke about his report to an assembly of South African Jews, declaring: “I am not aware that [it] has or is being used to delegitimize Israel.” Indeed he pledged he would object to any such use.

Sir, given that this is precisely how you are using his report, could you tell us whether Judge Goldstone has conveyed any objection, and if so, when?

In paragraph 12, you portray Hamas as a peaceful organization, referring to its, quote, “overtures.” Your support for Hamas has been so strong that, according to a March 9 report by Palestinian news agency Ma’an—citing you as the source—the Palestinian Authority asked you to quit. Not for technical reasons, as the PA representative said in this debate, but because they accuse you of being no less than “a partisan of Hamas.”

Since this council is about protecting human rights, why does your report mention nowhere that Hamas is a fundamentalist group that systematically discriminates against women, crushes religious minorities, executes political opponents, and persecutes gays? Why no mention of the Hamas Charter, which explicitly calls for the murder of Jews? Why do you disregard these gross violations of human rights?

Your report makes a dismissive reference to terrorism. Given your attitude toward Hamas; given that you published a 2008 article—signed in your UN capacity—alleging complicity of the U.S. government in the 9/11 terrorist attacks; and given that you played a key role in publishing David Ray Griffin’s book “The New Pearl Harbour”—the leading conspiracy tract arguing that 9/11 was an inside job—are you concerned about how your actions impact on the credibility of the UN in combating terrorism and protecting human rights?