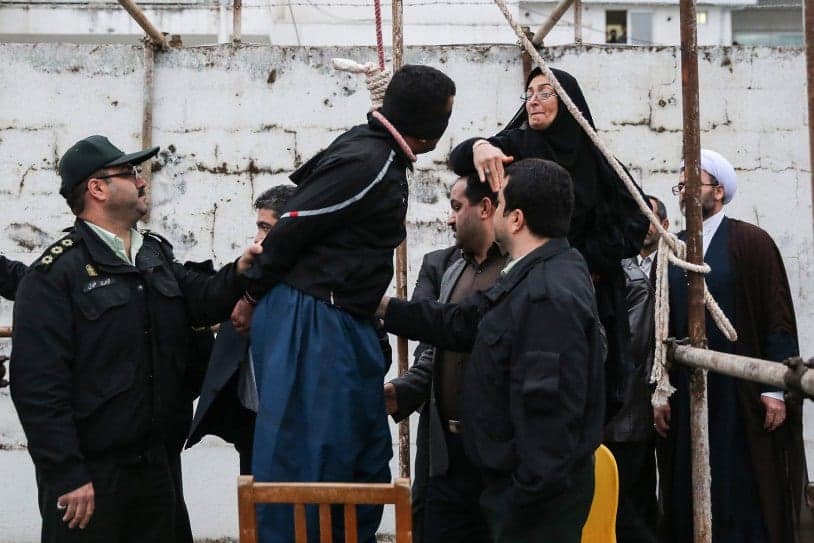 Iranian brought to the gallows in the northern city of Nowshahr on April 15, 2014. He was spared at the last minute. But last year Iran put to death at least 369 people and likely several hundreds of others — more people than any country in the world except China. U.N. Secretary-General Ban Ki-moon recently rebuked Iranian President Hassan Rouhani for failing to improve human rights, including its high level of executions.

GENEVA, April 25 – The United Nations has elected the Islamic Republic of Iran and more than a dozen other repressive regimes to top committees charged with protecting women’s rights and overseeing the work of human rights organizations.

Despite the sharp condemnation of Iran’s human rights record by UN chief Ban Ki-moon — who recently reported how women in Iran are “subject to discrimination, entrenched both in law and in practice” and how “women’s rights activists continue to face arrest and persecution” —  the UN Economic and Social Council (ECOSOC) in New York elected Iran to a four-year term on its 45-nation Commission on the Status of Women, the principal intergovernmental body dedicated to protecting women’s rights.

Equitorial Guinea was among other dictatorships also named to the global gender equality panel.

Meanwhile, in a separate vote, the UN additionally rewarded Iran by making the regime a member of its powerful 19-nation Committee on NGOs, a coveted position because it allows governments to silence criticism by acting as the gatekeeper and overseer of all human rights groups that seek to work inside the world body.

Other egregious human rights abusers elected to the influential panel includeAzerbaijan, China, Cuba, slave-holding Mauritania, Russia, and Sudan, whose leader, President Omar al-Bashir, is wanted by the ICC for genocide. All were deemed “not free” in the 2014 annual survey by Freedom House.

Impact of Elections: What This Means for NGOs

ISHR had warned earlier this month that the failure of democracies to throw their hat in the ring would mean that “the Committee’s membership will worsen considerably during the next term” and severely harm the freedom of NGOs.

However, ISHR praised the election ofGreece, Israel, South Africa, Uruguay,and the U.S., countries  it ranked as “strong, pro civil society candidates,” but who will now constitute a tiny opposition.

NGOs within the UN that take on dictatorships are increasingly under threat.

Yet now the very committee that is meant to judge our complaint against this dangerous front group is stacked more than ever before by Communist China, Vladimir Putin’s Russia, and their non-democratic allies, who control some 70 percent of the seats.

When the criminals are made the judges, it’s a travesty of justice. The crucial role of civil society within the world body is being eroded, its voice at risk of being silenced.

Tragically, the UN’s election this week of regimes such as Iran, Sudan, and Mauritania — governments that rape and torture political prisoners, subjugate women, and commit crimes against humanity from slavery to genocide — sends the message that politics trumps human rights.

By allowing arsonists to become the chief firefighters, the UN is letting down millions of victims around the globe who look to the world body for vital protection.