New Video: What Happened to the UN?
The following new video tells the story of what happened to the United Nations—and how UN Watch battled over the past 12 months to defend the true principles of human rights at the world body. 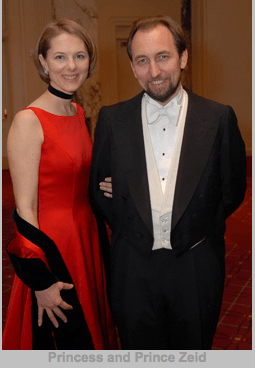 UN Watch awarded its prestigious annual human rights prize to Iranian dissident and best-selling author Marina Nemat, who was jailed and tortured as a political prisoner in Tehran when she was only 16 years old.
Click here for video of her remarks.
The prize ceremony took place at UN Watch’s 2014 Annual Gala, held on May 22nd in Geneva. Also honored was Canadian Cabinet Minister Jason Kenney, the keynote speaker, whose remarks appeared in our last issue here.
UN Watch this year chose to honor Marina Nemat to recognize “her brave and outstanding work in bearing witness to the horrific crimes perpetrated against her by a regime that continues to assault, jail, torture, rape and execute human rights defenders, religious, ethnic and sexual minorities, and thousands of other innocent men, women and children,” said UN Watch executive director Hillel Neuer.
Marina’s clear and compelling testimonies, published in best-selling books and delivered before the United Nations and numerous other global audiences, have helped stir the conscience of mankind to demand fundamental human rights for the voiceless victims of Iran, whose plight has only worsened in inverse proportion to the charm offensive of its rulers.
Nemat received the Morris B. Abram Human Rights Award, named after the civil rights advocate, diplomat and UN delegate who founded the watchdog NGO in 1993.
In recent years, UN Watch has arranged for Nemat to address key human rights fora in Geneva. New York, and Vienna, including testifying before the UN Human Rights Council.
Previous winners of the prestigious prize include Russian dissident and world chess champion Garry Kasparov, Dr. Massouda Jalal, the first woman in Afghanistan to run for president and to serve as Minister for Women’s Affairs, and Esther Mujawayo, an activist for victims of the genocide in Rwanda. 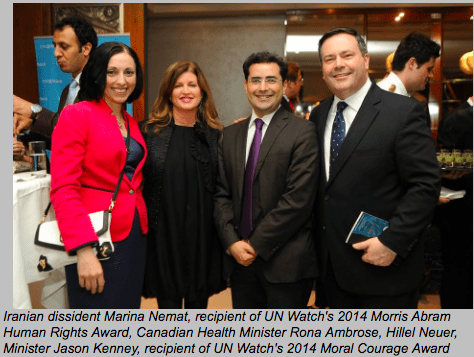 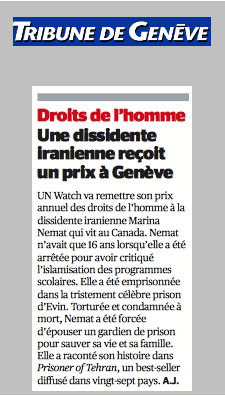 “You have heard what Boko Haram has done to Nigerian teenagers. This happened on April 14th, and it took the media three weeks to cover the story… It amazed me that in the 1980s in Iran, the government of Iran did—on a massive scale—what Boko Haram is doing right now. They took me and my friends out of our mothers’ arms at the ages of 15, 16, 17, even 13, and took us to Evin prison. They tied us to bare beds and beat us to a pulp.”
“They put many of us in front of firing squads. I was forced to marry my interrogator; it was their way of legalizing rape. This happened not only to me, but to nearly 40,000 young women. And I’m here in front of you today, 30 years later, and I beg one thing: Please acknowledge us, please speak out against such atrocity that is taking the lives and dignity of young women not only in Nigeria, but in many countries around the world including Iran.”
“Please stand in the way of the Iranian regime. It is not only the nuclear bomb that is an issue. It is an issue, don’t get me wrong. But, if we are negotiating with Iran, if the United States and other countries are negotiating with Iran, I beg of them to put human rights in the front in center.”
Marina Nemat on her partnership with UN Watch
“UN Watch has become family to me, and I think Hillel know that, and Arielle, she knows that. Thank you. You guys have given me an opportunity that no one else has managed to give: to face my torturers at the UN Human Rights Council…”
“The representatives of Iran—Hillel remembers—they were sitting only meters from us… I glanced at them a few times, and not even for a moment, not even for a moment did they look at me… That is something that will stay with me, and I dedicate this award and I dedicate those moment to my good friend Shinos Bezagi. She died at the age of 15, in October 1981, even before I was arrested. She can rest in peace knowing that I will not let it go… I have pledged to my friends and cellmates who have survived that I will stand for this till the last breath I take.”