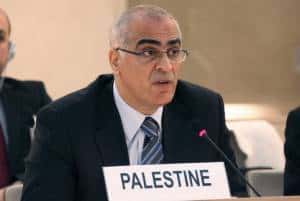 Today, states at the UN Human Rights Council put aside misgivings over “politicized reports” and “confrontational approaches” and came together over a shared hatred of Israel. The council met under its only standing agenda item devoted to a single nation—”The Human Rights Situation in Palestine and the Other Occupied Arab Territories”—as countries took the floor to excoriate the Jewish state. EU nations’ decision to boycott the biased debate earned them stern criticism from Arab and Islamic states.

Syria accused Israel of exploiting “terrorism to continue to occupy parts of the Arab territories, including helping the terrorists and carrying them to their hospitals and providing them with health treatment.”

Qatar on behalf of the 22-nation Arab Group decried Israel’s “violence and terrorism worldwide.” the

Pakistan excoriated Israel for “its cynical discourse of being victimized and singled out at the UN.” The Jewish state was guilty of “occupation, apartheid and colonization.” Pakistan expressed solidarity with the Palestinian people “67 years after the Nakba,” as Israel’s “policies of apartheid continue.”

Meanwhile, later in the day, under another agenda item, Pakistan denounced the “blaming and shaming” of countries, an approach which “does not work.”

Ecuador thanked Palestine for sending doctors following the recent earthquake in the country, scrupulously avoiding any mention of the Israeli health team sent at the same time.

Saudi Arabia lambasted Israel for subjecting Palestinians to “the worst forms of terrorism, oppression and intimidation.”

Algeria said that while “we are unable to enumerate Israel’s violations because of the number, we must at least mention some of them.”

Venezuela reproached Israel for its “colonialist policy as well as harassment and discrimination against people living in the Occupied Territories.”

Egypt denounced Israel’s “shameful” refusal to participate in the discussion.

Iran inveighed against Israel’s “indiscriminate use of force by Israeli forces against Palestinians and destruction of vital Palestinian infrastructure” as well as the “killing and extrajudicial killing of Palestinian civilians including children.”

Libya criticized Israel for “wanton murder” and the “Judaisation of Jerusalem.”

Lebanon censured Israel for continuing “to flout all humanitarian values and international instruments,” casting it as “a real enemy to peace and security”

Oman blamed Israel for all the Middle East’s woes, suggesting that “peace and war in the region has the Palestinian problem at its core.” With no hint of irony, Oman condemned the EU’s absence as evidence of “a politicized alliance in support of one party.”