Kerry Makes the Case for the U.N. Human Rights Council 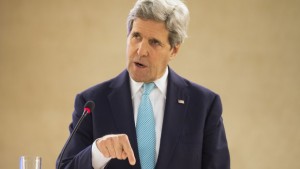 Secretary Kerry’s Intervention, Human Rights Council – Geneva, Switzerland, Monday, March 2, 2015
(Source: UN Human Rights Council Extranet)
Let me start by thanking the Council’s president, Joachim Rücker , for convening this session. I appreciate the opportunity to be here at such an important time – not only for the future of this body, but for human rights around the globe.
President Obama believes deeply in the mission of the Human Rights Council and recognizes the importance of US engagement and leadership within the organization. He made the decision to re-engage shortly after he became President because he knew it is vital for the United States – and for our allies –to have a seat at the table as the HRC sets its priorities and implements its agenda.

The moral standard that summons us here and unites us in common action does not belong to any one nation – or continent. The fundamental struggle for dignity has been a driving force in all of human history – worldwide. And what drives us are a set of universal values and aspirations. We in America know well that even in our own journey, there is still more work to be done. We also know that it is because of the courage and commitment of citizens in each generation that the United States has come closer to living up to its founding ideals. Our journey has not been without great difficulty or, at times, contradiction. But I think we can fairly say that we have dared to discuss these challenges openly, and hold ourselves accountable, including through our free press and unyielding commitment to protecting freedom of expression.

And even as we acknowledge the challenges of our history and those we continue to face today, I don’t think there’s any other country in the world that has worked harder to expand human rights than the United States of America. We are very proud of that.

President Obama and I support the HRC for a simple reason: We believe in its mission and its possibilities.

We know that, at its best, this Council can be a valuable means for reminding every nation of its commitments and obligations, and holding countries accountable when they fail to meet international standards.

It can help countries to respond successfully to domestic human rights challenges – as we’ve seen firsthand in Cote d’Ivoire and elsewhere – and advance global norms on issues like LGBT rights.
It provides a means for self-evaluation on the part of individual nations, including through the Universal Periodic Review Process. And we have seen this type of self-examination and engagement with the international community produce real progress on the ground.

And, of course, the HRC can play a critical role in shaping the global response to situations where human rights violations have reached levels that stagger the imagination and shock the conscience – and sadly, that is the case in far too many countries today.

In parts of the Middle East and Africa, violent extremists have made it clear that – not only do they have zero regard for human rights – they have zero regard for human life, period. We’ve seen groups like Daesh burn human beings alive; barbarically behead prisoners; sell girls into slavery; and execute widely and indiscriminately. Recently, the UN reported the horrifying ways that Daesh treats even its most vulnerable captives – crucifying children. Burying children alive. Hand-picking mentally challenged children to serve as suicide bombers and kill even more innocent people.   Almost every week brings new examples how far the evil of these groups reaches.

But we also know that the best antidote to violent extremism is to keep open avenues for non-violent dissent, and that our best ally is civil society, the activists, journalists, community organizers, and critical thinkers who reject extreme ideologies, while showing people a way to express hopes – and grievances – peacefully.

So it is especially troubling that so many people in so many places are facing grotesque restrictions on their freedoms and rights from their own governments – including, in some cases, their right to life.

In Syria, those who escape the horrific attacks of extremist thugs do so only to face a brutal dictator, who gases his own people, starves them as a weapon of war, and continues to barrage them barrel bombs that fall on their schools, hospitals, and mosques. Anyone who has seen the images will never forget them – maimed bodies, people with their eyes gouged out, emaciated prisoners – it defies any sense of humanity.

In North Korea, tens of thousands of people live as virtual slaves. There is no freedom of expression, worship, or political dissent.  Kim Jong Un executes those who disagree with him – purging his country of anyone he knows or imagines to be disloyal. For decades, the government has subjugated its citizens – starving them, torturing them, incarcerating them – or worse. Hundreds of thousands have lost their lives.

And then there’s the crisis in Ukraine. And here I urge the Council: Look at the facts. Do not allow yourselves to be misled. In Crimea and in the separatist-controlled areas of Eastern Ukraine, men, women, and children are being killed. They are being tortured. They are being raped and sexually assaulted. Detained arbitrarily. Abducted for ransom. Forced into labor. Persecuted because of who they are and where they worship. This is what’s happening. And it’s up to the HRC to shine a light on it, and do all we can to ensure it stops.

The bottom line is that too many people, in too many places, are facing unbearable realities.

We cannot accept that, and we do not accept that. And this Council – working with governments across the globe – can help to create a future much brighter than the present or past.

We are already making important – even historic – gains. And I’m proud to say that since 2009, the United States has worked hard with you to achieve those gains.

Consider the unprecedented resolutions this Council has passed to respond to threats facing civil society, to better protect the human rights of LGBT persons, and to promote freedom of religion and freedom of expression, including through resolution 16/18.

Consider the indispensable role the HRC has played in encouraging leaders to live up to their promises and commitments in countries such as Burma and Sri Lanka, where there are opportunities for real change.

Consider the mountain of evidence we’ve compiled, detailing horrific human rights abuses by government forces and terrorists in Syria. The wheels of justice may not turn as rapidly as we would like, but the foundation for establishing justice is being prepared.

Consider how the Commission of Inquiry created by this Council changed the conversation regarding the DPRK’s appalling record on human rights. As a result of the COI’s conclusions, the Security Council put the DPRK on its agenda – a clear condemnation of what’s happening in the country, and an important acknowledgement of the link between human rights and international security and peace.

And consider the great work of the Special Rapporteur on Human Rights in Iran, which spotlighted violations there.

Make no mistake: these are significant accomplishments. The more the international community understands about specific human rights violations, the greater the pressure will be on bad actors to change course. And eventually – not always overnight, but eventually – that pressure often translates into the kind of change that saves lives and expands freedom.

My government believes that together, we can continue to make progress and help this body fulfill its mandate to make the world a better, safer place.

But for that to happen, we have to get serious about addressing our roadblocks to progress. And the most obvious roadblock is self-imposed.

I’m talking, of course, about the HRC’s deeply concerning record on Israel. No one in this room can deny that there is an unbalanced focus on that one democratic country. No other nation has an entire agenda item set aside to deal with it. Year after year, there are five or six separate resolutions on Israel. This year, there is a resolution sponsored by President Asad concerning the Golan. How, I ask, is that a sensible priority at the very moment when refugees from Syria are flooding into the Golan to escape Asad’s murderous rule and receive treatment from Israeli physicians?

It must be said – the HRC’s obsession with Israel actually risks undermining the credibility of the entire organization. It has the potential to limit the good we can accomplish. No one should doubt for a second that the United States will oppose any effort by any group or participant in the UN system to delegitimize or isolate Israel – not just in the HRC, but wherever it occurs. When it comes to human rights, no country on Earth should be free from scrutiny – but neither should any country be subject to unfair and unfounded bias.

The United States remains committed to this important mission, and we certainly intend to remain involved in the HRC, which is why we are running for reelection.

When the stakes are as high as they are today – when people in every corner of the globe are denied rights they deserve – the HRC must live up to the standards upon which it was created. Together we must be a voice for those who are silenced by their leaders – a ray of light for those who spend their days locked away, without cause, in dark, dank cells – a source of hope for those who fear their suffering may never end. This is the kind of organization the world desperately needs. And it’s the kind of organization that will help all of our nations live up to the ideals we share. Thank you.