Nobody is a prophet in his own country, but if you’ve never heard of the lawyer Hillel Neuer, well, messieurs Putin, Castro, Assad and other serial abusers of human rights do know him. And they fear him.

Born in the Côte-des-Neiges neighborhood 43 years ago, the Concordia and McGill graduate is today the executive director of UN Watch, a NGO based in Geneva whose mandate is to ensure that the UN respects… its own Charter.

“People think that the UN human rights council is composed of wise old men with white beards, the likes of Plato and Socrates. But in reality, the UN is a reflection of the current state of the world,” he told me. Hillel Neuer is on the watch. 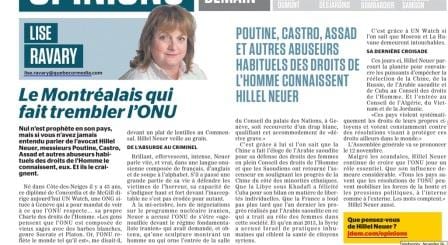 FROM THE ABSURD TO THE CRIMINAL

Brilliant, vivacious, intense, Neuer talks fast — and speaks the truth — in a UN-esque language made up of French, English, and alphabet soup. Despite having spent a great deal of his life defending victims of horrific abuses, his capacity to express outrage against injustice, loudly and clearly, has not abated.

In mid-October, during the Iranian nuclear talks, Neuer accused the UN of “kowtowing to Iran’s fundamentalist regime” after it gave in to Iranian demands and used a white curtain to cover up a historic wall carving of a naked man at the UN’s European headquarters in Geneva. Neuer called this deference “an ominous sign.”

It is thanks to him if we know that China took the floor in the Human Rights Council plenary to praise Saudi Arabia for its protection of women’s rights, and that the Saudis returned the favor by highlighting China’s progress in regard to ethnic minorities. That Libya, under Gaddafi’s rule, commended Cuba for its record on individual liberties. That France—as recently as last year—extolled Saudi Arabia’s progress on the role of women in society. And that in May 2013, Syria accused Israel of inhumane practices that threaten the health of Syrian citizens.

It is thanks to UN Watch that we know that Moscow and Havana remain untouchable.

These days, Hillel Neuer is criss-crossing the planet to convince the great powers to oppose the re-election of China, Russia, Saudi Arabia and Cuba to the Human Rights Council. And the entry to the council of Algeria, Vietnam and Jordan.

Despite the scandals, Hillel Neuer continues to believe that the UN plays an essential role. That its influence remains considerable. “All nations understand that UN resolutions can mobilize shame and political pressure, externally as well as internally. Words matter.”

So does Hillel Neuer.