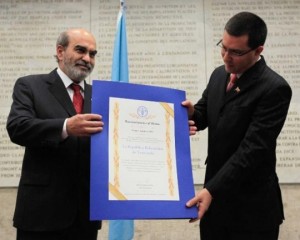 June 9, 2015 – As Venezuela’s citizens scrounge for food, with hundreds desperately waiting in long lines only to reach empty store shelves, the Maduro government was recognized yesterday by the United Nations Food and Agriculture Organization (FAO) for “meeting the UN millennium goal of halving malnutrition,” according to Venezuelan news reports.

“This is simply absurd and immoral, and a betrayal of the UN’s own values,” said Hillel Neuer, executive director of UN Watch. “Venezuelan media is now trumpeting the UN recognition as propaganda to legitimize a regime that is responsible for causing a desperate food situation for millions of their own people.” 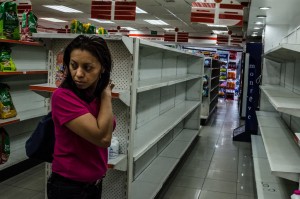 According to a January report in the New York Times, Venezuelans are herded “like cattle,” standing for hours in a line of more than 1,500 people hoping to buy food, as soldiers with side arms check identification cards to make sure no one tries to buy basic items more than once or twice a week.

“The situation has grown so dire,” reported the NYT, “that the government has sent troops to patrol huge lines snaking for blocks. Some states have barred people from waiting outside stores overnight, and government officials are posted near entrances, ready to arrest shoppers who cheat the rationing system.”

“I’ve always been a Chavista,” Mary Noriega told the NYT, using a term for a loyal Chávez supporter. But “the other day, I found a Chávez T-shirt I’d kept, and I threw it on the ground and stamped on it, and then I used it to clean the floor. I was so angry. I don’t know if this is his fault or not, but he died and left us here, and things have been going from bad to worse.”

At the UN yesterday, however, Bolivarian Vice-President Jorge Arreaza “highlighted his nation’s achievements in eradicating hunger under the socialist governments of Hugo Chavez and Nicolas Maduro.” Video.

Venezuela was also honored for allegedly providing technical assistance to other nations striving to meet millennium targets for eradicating hunger.

“Venezuela can be considered one of the countries, like Brazil and China, that has contributed to South-South cooperation in the world,” noted Laurent Thomas, FAO Director for Technical Cooperation.