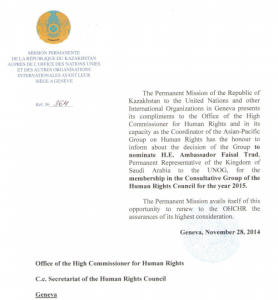 A – According to the UNHRC’s 2007 Institution Building Package, this is a 5-member committee that performs a key role in the selection of what are now 77 top human rights investigators and advisers serving the Human Rights Council:

47. A consultative group would be established to propose to the President, at least one month before the beginning of the session in which the Council would consider the selection of mandate‑holders, a list of candidates who possess the highest qualifications for the mandates in question and meet the general criteria and particular requirements.

48. The consultative group shall also give due consideration to the exclusion of nominated candidates from the public list of eligible candidates brought to its attention.

49. At the beginning of the annual cycle of the Council, Regional Groups would be invited to appoint a member of the consultative group, who would serve in his/her personal capacity. The Group will be assisted by the Office of the High Commissioner for Human Rights.

50. The consultative group will consider candidates included in the public list; however, under exceptional circumstances and if a particular post justifies it, the Group may consider additional nominations with equal or more suitable qualifications for the post. Recommendations to the President shall be public and substantiated.

51. The consultative group should take into account, as appropriate, the views of stakeholders, including the current or outgoing mandate-holders, in determining the necessary expertise, experience, skills, and other relevant requirements for each mandate.

52. On the basis of the recommendations of the consultative group and following broad consultations, in particular through the regional coordinators, the President of the Council will identify an appropriate candidate for each vacancy. The President will present to member States and observers a list of candidates to be proposed at least two weeks prior to the beginning of the session in which the Council will consider the appointments.

53. If necessary, the President will conduct further consultations to ensure the endorsement of the proposed candidates. The appointment of the special procedures mandate-holders will be completed upon the subsequent approval of the Council. Mandate-holders shall be appointed before the end of the session.

Officially, then, the ambassadors who are members of the influential CG serve in their “personal capacity.” In practice, however, for many members it is known that this is hardly the case. Members are in frequent contact with, and generally reflect the views of, their respective regional groups — and in certain documented cases they even abuse their positions on the CG to subvert the integrity of the selection process and advance their own government’s preferred candidates.

Q – How did the Saudi Ambassador get to the CG in the first place?

A – The root cause of the scandal came in in November 2013, when the UN’s elected Saudi Arabia to be one of the 47 members of the Human Rights Council, by an overwhelming majority of 140 votes — meaning, more than two-thirds of the General Assemby supported the misgonystic theocracy. This gave Saudi Arabia key influence at the UNHRC, and elevated its Geneva profile.

Exactly one year later, in November 2014, Kazakhstan — another dictatorship that sits on the UNHRC — sent a letter to the UNHRC president announcing that the Asian-Pacific Group on Human Rights had “nominated” the Saudi ambassador for membership on the CG for 2015.

Less than three months later, in February 2015, the Saudi ambassador was declared to be the Vice-Chairperson of the CG.

Q – How is the Chairperson of the Consultative Group (CG) selected?

A – The UN has never revealed the process of how the CG chooses its head (last year it was called “Chair,” and now it is “Chairperson”), though presumably it is done by the five members of the CG, acting by consensus vote.

Interestingly, the UN human rights office this week, under pressure from world outrage over the Saudi chairmanship, insisted — in a grossly misleading and self-serving statement signed by no person or entity — that countries like Saudi Arabia merely “assumed the chair” on a “rotating basis.” The UN’s attempt to use passive language and render the act automatic was quite deliberate.

This is all confusing, however, given that in 2014 the Chair served for one full year, whereas this year, while the Chilean ambassador Marta Mauras was initally announced as the Chairperson for 2015, she in the end only served for one session when, ahead of the June 2015 session, the CG suddenly “designated” Saudi ambassafor Faisal Trad as the Chairperson, “for this selection cycle.”

There was no explanation why the Chilean ambassador did not sit out the full 2015 term.

If there is a rotation, why does the CG need to “designate” anyone? Why does the Chilean get announced as the 2015 Chair, then serve only one selection cycle, while the Saudi sits for two?