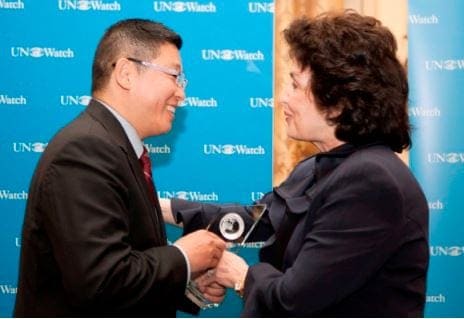 “Dr. Yang is a survivor of the Tiananmen Square who has devoted his life to helping his brothers and sisters in distress, and to advancing the cause of human rights for all,” said UN Watch director Hillel Neuer. “He spent five years in prison for defending democracy and helping victims. Dr. Yang is a role model for activists, dissident and concerned citizens everywere.”

Dr. Yang currently resides in the U.S. where he heads the Initiatives for China activist group. He accepted the award “on behalf of the great multitude of victims of human rights abuse, in China and elsewhere.”

“A government that systematically deprives its citizens of human rights is inherently unstable,” said Yang in his acceptance speech, adding that such regimes constitute a threat to the stability of the whole world.

Addressing an audience that included the UN delegates from a dozen nations, including the US, France, Canada, South Korea and Honduras, Yang said that China’s government “systematically and routinely imprisons, tortures and exiles its best and brightest, for no other reason than exercising the right to speak freely.”

China pursues “cultural genocide on the Tibetan, Uyghur and Mongolian peoples,” and institutes “foreign policies and models of repression that enable the morally bankrupt regimes of North Korea, Iran and Syria to suck the freedoms and dignities from their people.” Click here for full bio of Yang Jianli.

The UN Watch prize honors the legacy of the late Morris Abram, a legendary U.S. civil rights advocate, lawyer, activist, community leader and diplomat. Born in the American South, Abram founded UN Watch in 1993, after representing the U.S. at the United Nations’ European headquarters in Geneva.