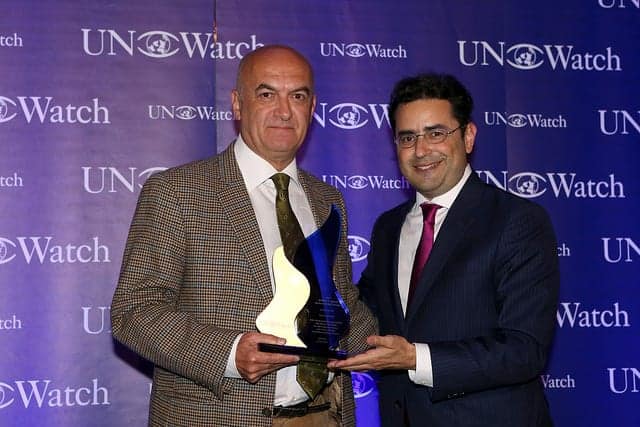 Baydar, an internationally-renowned journalist with a career spanning more than four decades, was chosen for his bravery in being “a leading voice against the authoritarianism of the Erdogan regime, and a fearless voice of truth on the world stage,” said Hillel Neuer, UN Watch Executive Director.

In 2013, Baydar was fired from his newspaper for daring to expose police brutality during the Gezi Park demonstrations. He once prophetically wrote that if you insist on independent journalism in Turkey, “the path leads to court or arrest.” True to those words, on August 30, 2016, Baydar was forced into exile when the police raided his house, looking to arrest him.

On receiving the award, Baydar said he felt lucky in comparison to many other intellectuals who have been fired, jailed or killed.

“I dedicate this award to the memory of Hrant Dink, Tahir Elçi and all the others who lost their lives; and to all my journalistic colleagues now in jail, for no other reason than that they believe in the nobility of their profession,” said Baydar.

“I accept this on behalf of all those in Turkey, who not only fight, but who in their bones resent despotism.”

The award commemorates the legacy of UN Watch’s founder, the late Ambassador Morris Abram, a pioneering civil rights advocate, diplomat and UN delegate, who in 1963, helped win the landmark U.S. Supreme Court case that granted equality to the votes of African-Americans.

UN Watch is best known for organizing the annual Geneva Summit for Human Rights and Democracy, a key gathering for dissidents, and for bringing victims to testify before the United Nations Human Rights Council, including from China, Cuba, Egypt, Libya, North Korea, Syria, Sudan and Venezuela.