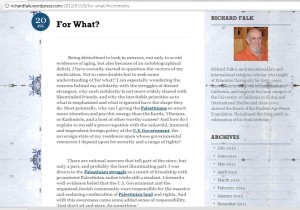 The U.N. Human Rights Council’s Richard Falk is now accusing “the organized Jewish community” of being “responsible for the massive and enduring confiscation of Palestinian land and rights.” This is only the latest of a series of Richard Falk outrages exposed by UN Watch. Below is the letter faxed today to President Obama and other world leaders and high U.N. officials demanding an immediate condemnation.

With profound regret—and moral outrage—we are obliged to inform you that a representative of the United Nations Human Rights Council has breached his responsibility to uphold the high standards required by that world body.

Once again, Richard Falk, the UNHRC’s Special Rapporteur for the permanent investigation of “Israel’s violations of the bases and principles of international law,” has published racist remarks against Jews and Judaism.

Last week, on 20 July, writing in the same blog where he posted an anti-Semitic cartoon that was condemned last year by British Prime Minister David Cameron, U.N. High Commissioner for Human rights Navi Pillay, and your representative to the U.N., the Human Rights Council’s Special Rapporteur Falk accused “the organized Jewish community,” as well as the U.S. government, of being “responsible for the massive and enduring confiscation of Palestinian land and rights.”  (See “For What,” R. Falk, 20 July 2012, at http://richardfalk.wordpress.com.)

This absurd and slanderous collective accusation, reproduced in the Palestine Chronicle and on numerous websites, constitutes classic anti-Semitism. Moreover, by attempting to blame Jewish communities everywhere for alleged crimes against Palestinians, Mr. Falk effectively provides an international warrant for terrorism, employing the language and logic used by those who carry out attacks against Jewish community centers, synagogues and schools worldwide.

Mr. Falk published his anti-Semitic libel on the same day that Israel was burying the victims of last Wednesday’s brutal attack against Israeli Jewish tourists in Bulgaria, and on the same day a British court sentenced two homegrown terrorists to prison for planning attacks against Jewish communities in Manchester.

Mr. Falk was also surely aware that when Mohammed Merah opened fire on Jewish schoolchildren in Toulouse, on 19 March, it was out of the conviction, in his words, that “The Jews kill our brothers and sisters in Palestine.” When Mr. Falk points an accusing finger at “the organized Jewish community” for alleged crimes against Palestinians, he willy-nilly uses his high United Nations position to encourage such attacks.

Second, all of this comes as Mr. Falk is also providing the cover endorsement for the book “The Wandering Who,” replete with attacks against Israel, Jews and Judaism. The material is so extreme that 20 anti-Zionist activists, including Omar Barghouti and Electronic Intifada founder Ali Abunimah, denounced the book and its author for racism and anti-Semitism. During the July debates of the UNHRC, on behalf of UN Watch I challenged Mr. Falk about his leading promotion of this tract, but he refused to respond.

Notwithstanding the fact that Mr. Falk’s latest article dwells at length on his U.N. position, and that his book endorsement lists the same, his defenders will no doubt claim, as they have done before, that these racist remarks were published “in his personal capacity.”

Given that his previous such attempts to evade responsibility failed to block the condemnations of him by your Administration, U.N. Secretary-General Ban Ki-moon and other world figures, I have no doubt that you will speak out and denounce these latest instances of incitement to racism on the part of Mr. Falk, who, in many respects, embodies the ongoing bias and bigotry of the body he represents, the U.N. Human Rights Council.

To ensure that your message is heard loud and clear in Geneva and around the world, we urge your government to request that your statement be circulated as an official document of the UNHRC at the upcoming September session.

The cause of human rights and the founding principles of the United Nations must not be subverted. Thank you for your attention to this urgent matter.