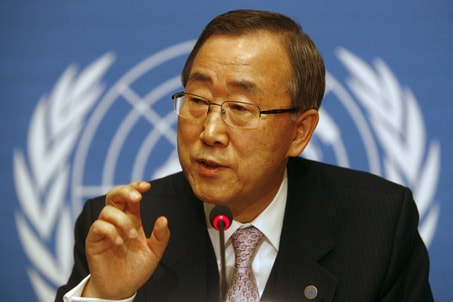 In a rare move, the United Nations has rebuked Hamas leaders, with secretary-general Ban Ki-moon saying he was “shocked” that they celebrated last night’s deadly Palestinian terrorist attack in Tel Aviv, which claimed the lives of four Israelis, wounding another 16.

Anyone remotely familiar with the Hamas terrorist group may rightly ask whether there’s any reason to be “shocked.” Yet Mr. Ban’s expression was a form of rebuke, and it is to be welcomed.

Unlike the usual mealy-mouthed UN responses to attacks on Israelis, this one rightly called it a terrorist attack; noted that the assailants were Palestinians; and called out Hamas leaders for glorifying the murders.

Initially, the UN chief was silent, while only Nickolay Mladenov, the UN envoy to the Middle East peace process, was speaking out:

.@UN_Spokesperson Why is Ban Ki-moon silent? Why can't he immediately condemn Palestinian terror as did this UN rep? https://t.co/sKxsIgYTLB

Fortunately, the spokesperson soon after issued a statement reflecting the same sentiments, featured below.

The Secretary-General condemns tonight’s terrorist attack in Tel Aviv in which at least four Israelis were killed by Palestinian assailants and another four injured. He conveys his condolences to the families of the victims and the Government of Israel.

The Secretary-General reiterates that there is no justification for terrorism nor for the glorification of those who commit such heinous acts.

The Secretary-General is shocked that the leaders of Hamas have chosen to welcome this attack and some have chosen to celebrate it. He calls upon the Palestinian leadership to live up to their responsibility to stand firmly against violence and the incitement that fuels it.