GENEVA, Dec. 28 – With UN flags at half-mast today at its Human Rights Council (see photo right) and other buildings to mark the fu 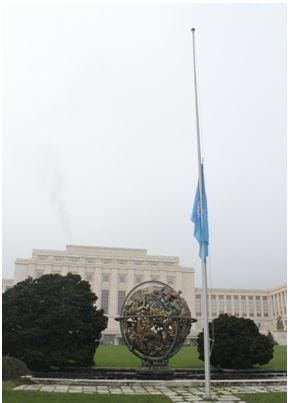 “We understand that the UN follows diplomatic protocol, but the world body must not forget that its founding purpose is to defend basic human rights, and sadly that message is at serious risk of being blurred today,” said Hillel Neuer, executive director of UN Watch, a leading advocacy group at the UN for human rights in North Korea. Click here for recent UNW statements on North Korea.

“Today should be a time for the UN to show solidarity with the victims — the millions of North Koreans brutalized by Kim’s merciless policies of starvation, torture and oppression — and not with the perpetrator,” Neuer said.

“We call on UN Secretary-General Ban Ki-moon and High Commissioner for Human Rights Navi Pillay to make clear that today’s gesture in no way signals respect for a mass murderer of his own people, a man personally responsible for some of the worst atrocities of our time.”

Neuer also expressed concern that the North Korean regime “is likely to exploit the images of flags at half-mast to claim world sympathy for Kim Jong-il and his regime.”

There is little hope for any immediate change for the people of North Korea, UN Watch highlights.

“Yes, the world should mourn today. Not for a mass murderer, however, but for the still suffering people of North Korea, who face the prospect of continued oppression under the incoming dictatorship of Kim Jong-il’s son, Kim Jong-un, who’s shown no evidence of being any less ruthless than his father,” Neuer concluded.

A majority in the 193-member UN General Assembly on Dec. 19 approved a resolution condemning North Korea’s human rights record. The measure passed with 123 countries in favour, 16 against. There were 51 abstentions, while three countries were absent for the vote.

The resolution expressed the assembly’s “very serious concern at the persistence of continuing reports of systematic, widespread and grave violations of civil, political, economic and social and cultural rights” in North Korea.