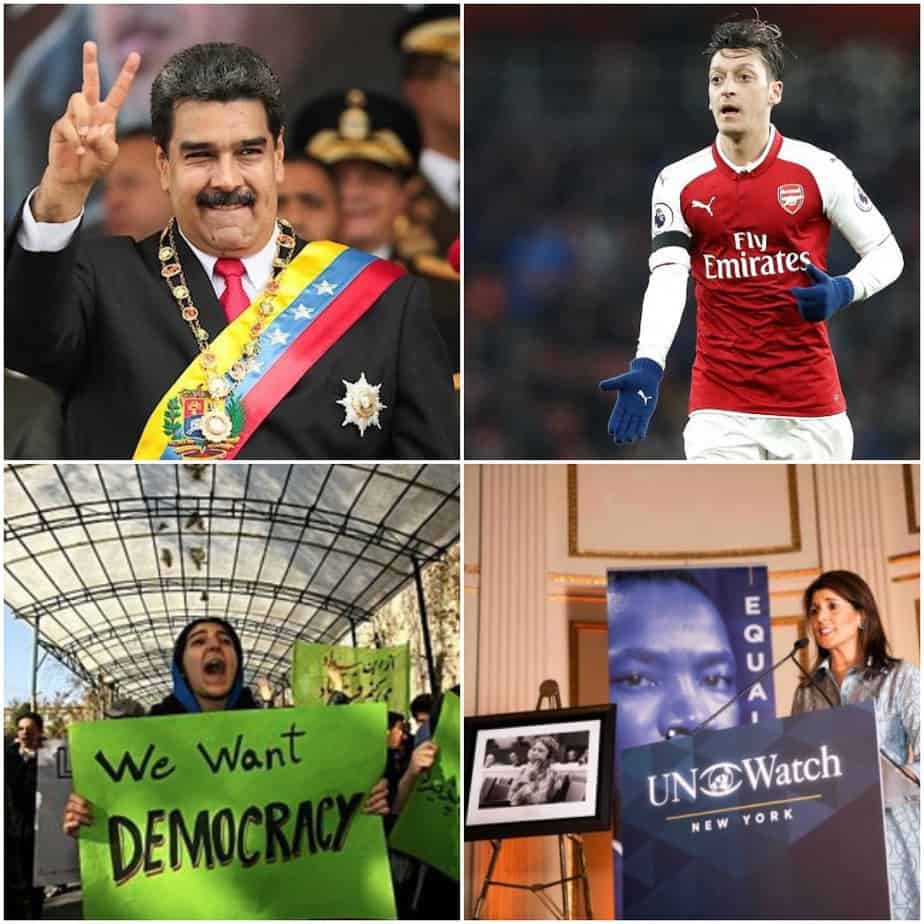 Trending UN Watch tweets from December 2019 put a global spotlight on the UN Human Rights Council’s inaction on Iran’s massacre of anti-government protesters; the UN General Assembly’s singling out of Israel; Mauritania’s election to the Human Rights Council despite having 500,000 slaves; and countries that persecute gays and yet which serve on the UNHRC.
UN Watch tweets of the month also included Ambassador Nikki Haley’s keynote address at UN Watch’s Inaugural New York Gala Dinner; UN Watch’s campaign to expel Venezuela from the UNHC; Pakistan’s sentencing of academic Junaid Hafeez to death for blasphemy; China’s retaliation against an Arsenal player for his condemnation of the mass detention of Uighur Muslims; and exposing Ken Roth of Human Rights Watch for obsessively targeting Israel.

SICK: Islamic Republic of Iran security forces arrest mourners at the Karaj cemetery, outside of Tehran, for the crimes of attempting to commemorate those killed in recent protests. @MBachelet, why do you refuse to call for an emergency session of the U.N. Human Rights Council? pic.twitter.com/C3sVYS74z0

List of U.N. General Assembly resolutions to be adopted tomorrow:

Have a nice day.

Mauritania’s Election to UNHRC Despite Having 500,000 Slaves

Thank you, @NikkiHaley, for delivering the keynote speech at UN Watch's Inaugural New York Gala Dinner, and for accepting our 2019 Eleanor Roosevelt Award. I wish all U.N. ambassadors follow your model of courageously speaking out for freedom, democracy, fairness & human rights. pic.twitter.com/c7IpZft5C0

.@NikkiHaley: "If we are serious about being advocates of human rights, Venezuela’s membership on the Human Rights Council cannot stand. Please support @Diego_Arria in this effort. Make your voice heard."

Sign the petition to remove 🇻🇪 from the UNHRC: https://t.co/OvpyszptDJ pic.twitter.com/GMkqF7hDEs

"There was a group of Venezuelans protesting outside the UN. Ambassador Haley came with a megaphone. I've never seen an ambassador do anything of that sort. So Ambassador Haley was very special for us. We are very grateful for what she did for the cause of freedom in my country." pic.twitter.com/LpdCxeGEFP

At least 6 countries administer the death sentence for blasphemy.

🇺🇳 5 out of those 6 serve on the U.N. Human Rights Council, or will be joining next week:
🇸🇦 Saudi Arabia
🇦🇫 Afghanistan
🇲🇷 Mauritania
🇵🇰 Pakistan
🇳🇬 Nigeria

One week from tomorrow, a man who destroyed his country, starved his people & crushed dissidents will join the U.N.'s highest human rights body.

On Jan. 1, a narco-criminal who starved his own people, crushed dissidents & destroyed his country will join the U.N.'s highest human rights body.

98,242 people have signed our demand for his expulsion.

China retaliates against soccer player who criticized treatment of Uighur Muslims by removing him from Chinese computer games.

Why is China a member of the 47-nation U.N. Human Rights Council?
https://t.co/c2J1UWGj7h