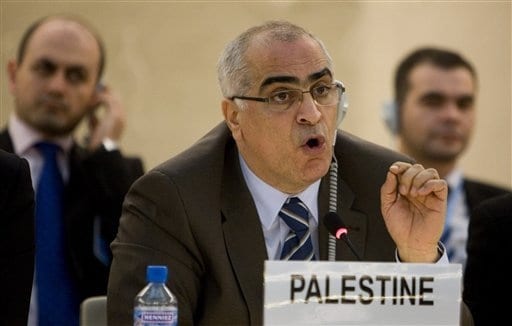 GENEVA, June 27 — While Arab and Islamic states today blasted Israel at the UN Human Rights Council— in a debate held under the special agenda item against the Jewish state, a permanent fixture of every meeting—UN Watch, the first non-governmental group to take the floor, welcomed the fact that not a single Western democracy participated in the debate.

Qatar, speaking on behalf of the Arab Group, “deplored decisions by certain states to boycott this agenda item, which encouraged Israel to continue committing crimes against the Palestinians.”

But others welcomed the gesture. “In 1968, René Cassin, at the 20th anniversary of the Universal Declaration of Human Rights which he helped to create, left early in protest at the singling out of Israel,” UN Watch executive director Hillel Neuer told the council.
“Today, on the 10th anniversary of the Human Rights Council, the free world has protested the vilification of Israel by not showing up at all.”
See below statements from today’s debate, followed by UN Watch’s intervention.

Syria accused Israel of exploiting “terrorism to continue to occupy parts of the Arab territories, including helping the terrorists and carrying them to their hospitals and providing them with health treatment.”
Qatar on behalf of the 22-nation Arab Group decried Israel’s “violence and terrorism worldwide.”
The Non-Aligned Movement, represented by Iran, condemned “Israel’s ongoing illegal colonization.”
Pakistan excoriated Israel for “its cynical discourse of being victimized and singled out at the UN.” The Jewish state was guilty of “occupation, apartheid and colonization.” Pakistan expressed solidarity with the Palestinian people “67 years after the Nakba,” as Israel’s “policies of apartheid continue.”
Meanwhile, later in the day, under another agenda item, Pakistan denounced the “blaming and shaming” of countries, an approach which “does not work.”
Qatar lamented Israel’s “apartheid wall, racist policies and continued attempt to spread terrorism.”
Ecuador thanked Palestine for sending doctors following the recent earthquake in the country, scrupulously avoiding any mention of the Israeli health team sent at the same time.
Saudi Arabia lambasted Israel for subjecting Palestinians to “the worst forms of terrorism, oppression and intimidation.” Saudi Arabia regretted that “some countries had decided to boycott this key agenda item.”
Algeria said that while “we are unable to enumerate Israel’s violations because of the number, we must at least mention some of them.”
Venezuela reproached Israel for its “colonialist policy as well as harassment and discrimination against people living in the Occupied Territories.”
Egypt denounced Israel’s “shameful” refusal to participate in the discussion.
Kuwait “categorically” condemned the “heinous crimes of Israel.”
Iraq decried Israel’s “policy of discrimination, collective punishment and killing”
Bahrain said that “Israel continues to kill Palestinians in an arbitrary manner, confiscating lands and destroying homes.”
Iran inveighed against Israel’s “indiscriminate use of force by Israeli forces against Palestinians and destruction of vital Palestinian infrastructure” as well as the “killing and extrajudicial killing of Palestinian civilians including children.”
Libya criticized Israel for “wanton murder” and the “Judaization of Jerusalem.”
Lebanon censured Israel for continuing “to flout all humanitarian values and international instruments,” casting it as “a real enemy to peace and security”
Oman blamed Israel for all the Middle East’s woes, suggesting that “peace and war in the region has the Palestinian problem at its core.” With no hint of irony, Oman condemned the EU’s absence as evidence of “a politicized alliance in support of one party.”

Mr. President,
Citizens around the world listening to today’s debate have reason to be confused. For never before in the history of the United Nations have the pronouncements made here been more disconnected to reality.
In here, we have been told by various Middle Eastern nations that Israel is the greatest violator of the rights of health, women, equality and the environment.
In reality, Israel, with all its flaws, is the only country in the Middle East whose hospitals treat Palestinians and Israelis; Jews, Muslims and Christians; the only country in the Middle East that respects women’s rights; the only country in the Middle East that respects the rights of minorities; and the only country in the Middle East that is a world leader in developing vital technologies such as desalination, water treatment, and drip irrigation.
In here, Syria, Libya, Yemen are some of the countries that lecture on human rights. In reality, many of these are not even countries any more.
Mr. President, Let us be clear. Israel should be subject to criticism like any other country. But Israel is not treated like other countries. No other country has an entire agenda item devoted to it—not even Syria, not even North Korea.
There is, however, one silver lining today—the countries who did not speak. Democracies, like France, Germany, UK, Canada, made the decision not to take the floor because this agenda Item singles out one country, Israel, for what Secretary-General Ban Ki-moon himself denounced as selective and unfair treatment. Today is just one of many devices employed here at the UN that cross the line from legitimate criticisms of Israel’s policies to attempts to delegitimize the state of Israel itself.
Here at the United Nations, where the majority faction has the power to decide whatever it wants, and where the minority faction has no judicial recourse, no right of appeal, no remedy, democracies have protested this injustice in the only way possible.
In 1968, René Cassin, at the 20th anniversary of the Universal Declaration of Human Rights which he helped to create, left early in protest at the singling out of Israel.
Today, on the 10th anniversary of the Human Rights Council, the free world has protested the vilification of Israel by not showing up at all.
Thank you, Mr. President.