The U.N. General Assembly established the UN Human Rights Council on 15 March 2006, in order to replace the previous Human Rights Commission, which had been heavily criticized for allowing countries with poor human rights records to be members.  Things don’t seem any better today.

Allowing Libya to be involved in the UNHRC in any way is a travesty.  Libya is a dictatorship, which doesn’t protect its citizens’ human rights and flagrantly murders citizens of other countries.

My son was a 20-year-old Syracuse University student, studying abroad for a semester in London.  Sadly he was a passenger on Pan Am Flight 103 when it blew up over Lockerbie Scotland in December of 1988.  He and 269 other innocents perished at Libya’s hand. Many of the passengers, like my Rick, were college students.  Most were under 24 years old.

Finally, in 2001 a Libyan intelligence agent, Megrahi, was convicted by a Scottish court at a trial that was held in an obscure location in the Netherlands.  The press coverage, other than the first and last days, was almost nonexistent. The trial was long and detailed.  Many damning facts were presented, none of which was refuted by the defense.   The verdict was correct.  We all understood that Megrahi didn’t act alone and he didn’t act on his own, but there wasn’t sufficient evidence to indict or convict his superiors.

In 2003, Libya finally accepted responsibility for the bombing of Pan Am Flight 103 in a letter to the UN.

Hearing Libya admit responsibility for the bombing and knowing that at least one murderer was in jail in Scotland gave some small consolation and some sort of “closure” to the victims’ families.  The “compassionate release” last year by the Scots, and the circus that followed, ended that with a thud. 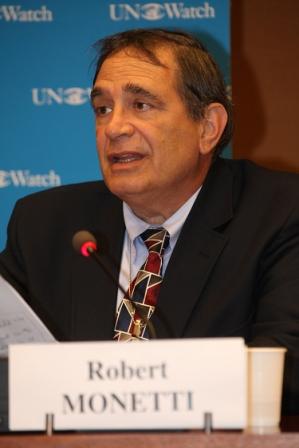 The son of the dictator flew his private plane to Scotland to escort the murderer back to Libya, where Gadhafi gave him a hero’s welcome.  This is the punishment Libya gives to convicted human rights abusers.

A French court convicted Libya of the 1989 bombing of the French UTA plane over Chad.  They admitted giving explosives and weapons to the IRA during the “troubles” in Northern Ireland.

They may still be holding the Swiss businessmen that they detained in retaliation for the Swiss treatment of Gadhafi son’s for his thuggish behavior in a Swiss hotel.  There were many more human rights violations by Gadhafi’s regime, but time is short today.

I guess a Libyan government official would be able to recognize a human rights abuse – but he’d just think of it as “business as usual.”

In March of 1989, friends and relatives of those murdered formed the “Victims of Pan Am Flight 103” (VPAF103). The group gave me the job of Aviation Security. I’ve worked on aviation security issues for most of the past 22-1/2 years. I was the VPAF103 representative on the US FAA Aviation Security Advisory Committee (ASAC), until the TSA took over. I served as the only “civilian” member of the Baseline Working Group in 1996. I’ve worked as a consultant to the FAA for 3 years. I was a member of the US airport Public Safety and Security Committee (ACI-NA). I have attended many aviation security seminars, symposia, and meetings; and have spoken at several. I witnessed most of the bombproof container tests and several of the explosive tests in aircraft.

In January of 1998, the FAA conducted a test in Mobile, Alabama. They bought an old Lockheed L-1011. They filled several luggage containers with unclaimed bags and pressurized the plane to 9 PSIG. In one of the suitcases, was a small improvised explosive device (IED). The bomb was similar to the size that Megrahi used to blow up Pan Am 103.  The plane instantly unpeeled and the cockpit fell off. It looked just like the reconstructed Pan Am 747.

Make no mistake.  Megrahi was one of the people who planted the bomb on PA103.  He was a high-ranking member of Libyan intelligence. (oxymoron?) He had 2 two passports. The second one was only used once on December 20-21, 1988 to fly in and out of Malta.  He had a Swiss bank account of more than one million dollars.  The piece of timer found in the wreckage matched the ones that Mebo (a Swiss company) only built for Libyan intelligence.

With almost unlimited oil money, Libya has financed a 10-year-long relentless media campaign in the UK to discredit the trial, the evidence and the conviction. And it worked. Gadhafi not only kills at will, but he also manages to get away with it.

While freedom of speech is a right in all democratic countries, it is not a right that Gadhafi gives his own people.

As long as Gadhafi sits on all that oil, he can do whatever he pleases and get away with it. There’s no morality in politics. World politics is about business, and in Libya, business is about oil.

Why ever would the U.N. let Gadhafi judge other countries’ human rights records?