GENEVA, June 12, 2017 – The chair of today’s UN Human Rights Council debate, council vice-president Amr Ahmed Ramadan of Egypt, broke with parliamentary protocol and refused to thank the representative of UN Watch after he challenged a new report that blames Israel for when Palestinian men commit violence against women, and asked why Islamic preachers of wife-beating were ignored.
The U.N. expert — who slammed Israeli counter-terrorism measures for their “gendered impact” on Palestinian women yet failed to cite Palestinian stabbings or rocket attacks for their “gendered impact” on Israeli women — failed to answer UN Watch director Hillel Neuer’s question about the source of her data for blaming Israel for Palestinian violence against women. See below.

Testimony before the U.N. Human Rights Council by Hillel Neuer, executive director of UN Watch, June 12, 2017.
Mr. Chairman, today’s report on Israel and the Palestinian territories provides important information on women targeted by violence.
Regrettably, however, the report is undermined by its subservience to one recurring unproven assumption. As highlighted by the rapporteur, that is the “clear linkage between the prolonged occupation and violence against women.”
Ms. Simonovic, in other words, what you are saying is as follows: “When Palestinian men beat their wives, it’s Israel’s fault.”
In this regard, I wish to pose some questions:
First: how do you know there is a “clear linkage”? Where is the data? I don’t see it anywhere in the report, not in Addendum 1 or 2.
Is it right to continue infantilizing Palestinians, such that when a man in Ramallah beats his wife, we encourage him to say ‘Israel made me do it’?
Your report speak of Israeli actions that create pressure. Well, maybe. Yet there may be a myriad of other influences. How do you know which is significant?
It would be interesting, for example, to examine comparable populations in in Lebanon, Jordan, Sinai and Egypt, and to see if there are differences in the rate of violence against women. Ms. Simonovic, why have you not done so? Where is the data?
Second: You make a passing reference to the influence of “tradition and culture.” Do you mean Palestinian, Arab or Muslim tradition? You don’t say which, and don’t seem to be interested in this key factor in the Middle East.
Why did you fail to mention that official Palestinian TV regularly broadcasts Islamic preachers who tell the people how to beat their wives?
On February 8, 2016, for example, Hassan al-Laham, the Mufti of Gaza, quoting the Koran and the Hadith, advised husbands on how to beat their wives, recommending: “Hitting that does not make her ugly; in other words, not hitting that will bring the police… The hitting will be like a joke.  The hitting is a kind of reminder that the love and friendship that Allah commanded is still found between the couple.”
Ms. Simonovic, while you find numerous indirect ways to blame Israel, how could you omit these forms of direct incitement? Why do you not mention terrorism against Israeli women? 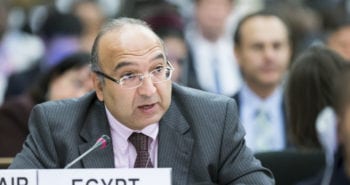 “I would like to say thank you, but I can’t—because I think that you need to respect this Council more in the next days.”

But maybe just one sentence before closing. A question from NGO with respect to situation when Palestinian man is beating his wife and is it then the responsibility of Israel.

Of course, each case should be analyzed as a specific case and we have to determine who is responsible for what, but it is not possible to have such generalization, as was done by that NGO representative. 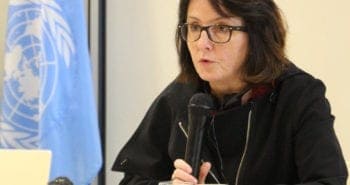 Text of the Reports

Here is how the two reports presented today before the UNHRC by Dubravka Šimonovic, UN Special Rapporteur on Violence against Women, argue that Israel is to blame for Palestinian violence against women.

Mission to the State of Palestine: