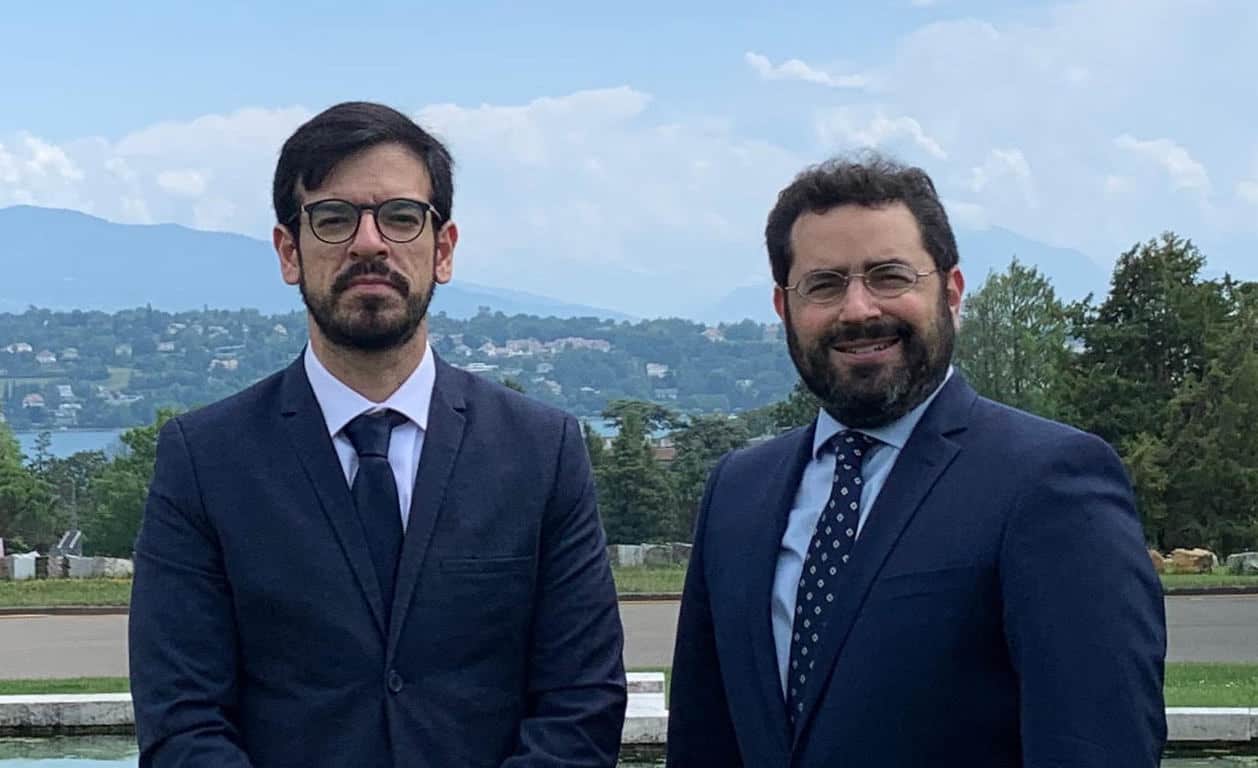 Venezuelan MP Miguel Pizarro outside the UN Human Rights Council in Geneva, Switzerland, hosted by Hillel Neuer, Executive Director of UN Watch.
GENEVA, July 3, 2019 — Escaped Venezuelan MP Miguel Pizarro addressed the UN Human Rights Council today, calling for the creation of a commission of inquiry into human rights abuses committed by the government of Nicolás Maduro. (See full speech below.)
It was the Caracas lawmaker’s first public appearance since he went into hiding in Venezuela after being targeted in May by trumped-up charges of treason and stripped of parliamentary immunity.
“Seven million Venezuelans today need humanitarian aid. More than 4 million have migrated because of the humanitarian emergency, and at least 630 political prisoners have been documented — many of them victims of cruel treatment,” he said.
Pizarro, who was invited to the UN by Geneva-based human rights group UN Watch, called on the 47-nation body to investigate the dire human rights crisis in Venezuela, ahead of UN rights chief Michelle Bachelet’s report to the council on Venezuela on Friday, June 5.
“I wish to encourage member states to keep these statistics and cases very present on your minds when the report on the state of human rights in Venezuela is published and the corresponding debate is held, with a view to considering a Commission of Inquiry,” he said.
UN Watch joined Pizarro’s call for an urgent investigation into the Maduro regime’s human rights violations.
“Sadly, despite our repeated appeals, the UN Human Rights Council has refused to establish a commission of inquiry to hold Maduro to account for gross and widespread violations that many experts believe amount to war crimes. On the contrary, the Maduro regime sat as an elected member of the council for the past six years,” said UN Watch’s Executive Director Hillel Neuer.
Pizarro has been a member of the Venezuelan National Assembly since 2011 and currently chairs the Special Committee on Humanitarian Aid and the Permanent Committee for Social Development.
On May 14, Maduro’s Supreme Court declared that Pizarro was implicated in “the flagrant commission” of numerous crimes including “Treason to the Fatherland, Conspiracy, Insurrection, Civil Rebellion, Usurpation of Functions, Public Instigation to the disobedience of the laws, and continued hatred.”
The European Union said that the “flawed judicial decisions” against Pizarro and three other MPs were “part of a pattern of blatant violations of due process and unfair legal proceedings.” They constituted “clear measures of intimidation aimed at hampering the political work of the National Assembly.”

Thank you, Mr. President. I speak for United Nations Watch.

I am Miguel Pizarro, Member of the National Assembly of Venezuela, and I preside over the Commission of Humanitarian Aid.

I’m not here by choice.

On May 14th of this year, my parliamentary immunity was illegally stripped by order of Nicolás Maduro, as has been the case with 22 of my colleagues in the last month.

This occurred in conjunction with the harassment and threats suffered by at least 96 parliamentarians, among them Rep. Zambrano and Rep. Requesens, who have been detained in military installations and by the political police — all to try to end the only legitimate power of our country.

However, I’m not here to talk about me. I am one of the many examples of the systematic violations of human rights, as a pattern of the behavior of the State in Venezuela.

According to figures published by the United Nations itself, 7 million Venezuelans today need humanitarian aid. More than 4 million have migrated because of the complex humanitarian emergency, and at least 630 political prisoners have been documented — many of them victims of cruel treatment.

These include Corvette Captain Rafael Acosta Arévalo, murdered on June 29th in state custody as a result of torture inflicted by the military counterintelligence in the torture center DGCIM, and Rufo Velandria, a 16-year-old who lost his eyes due to police abuse while protesting against limited access to gas in the country.

I wish, through you, to encourage Member States to keep these statistics and cases very present on your minds when the report on the state of human rights in Venezuela is published and the corresponding debate is held, with a view to considering a Commission of Inquiry.

UN Press Conference
Following the UN Human Rights Council’s discussion on the situation in Venezuela on Friday, July 5, UN Watch hosted Pizarro for a press conference with UN journalists. “After regime change, we need justice for the victims, and punishment for the criminals,” he said to reporters. 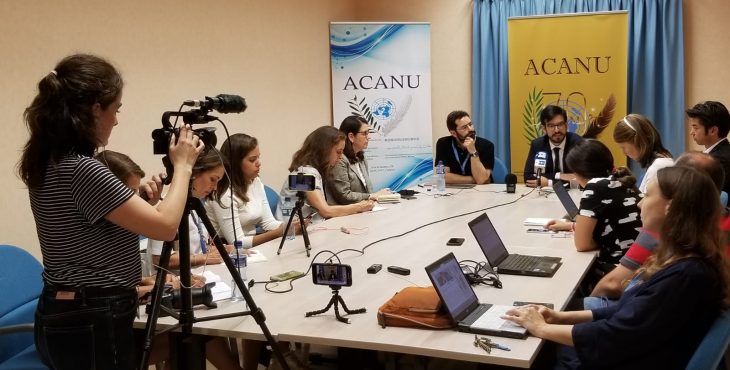