EU's Ashton: Turkish PM's Remarks are "Unacceptable now and ever"

PRESS RELEASE
UN Watch: Erdogan should apologize prior to next week’s racism debate in Alliance of Civilizations chamber 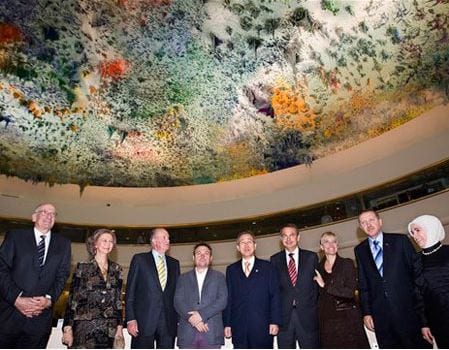 GENEVA, March 11, 2013 – UN Watch, the Geneva-based human rights group that was first to expose and criticize the Turkish prime minister’s UN speech calling Zionism a “crime against humanity,” welcomed today’s statement by EU High Representative Catherine Ashton calling Mr. Erdogan’s remarks as attributed  “unacceptable to the European Union now and ever.” This was her first comment on the 2-week-old controversy.

UN Watch executive director Hillel Neuer said that after so many world leaders have condemned the remarks (see list below), “it is now time for Mr. Erdogan to apologize.”

Noting that Erdogan’s remarks will be addressed by human rights groups during a UN debate next week on racism and intolerance — set to take place in the Human Rights and Alliance of Civilizations Chamber which Erdogan himself inaugurated in 2008 (see photo above) — Neuer said the Turkish leader had a special obligation to heal the wound.

“As co-sponsor of the UN’s Alliance for Civilizations, Mr. Erdogan’s continued silence casts a shadow upon a major world initiative that he promised would prevent cultural polarization, intolerance and all forms of discrimination.”

“For Mr. Erdogan to attack a fellow UN member state’s right to self-determination, and its historical and cultural underpinnings, is also inconsistent with Turkey’s international obligations under UN conventions against incitement to racism,” said Neuer.

Israeli PM Benjamin Netanyahu: “This is a dark and mendacious statement the likes of which we thought had passed from the world.” Source

White House: “We reject Prime Minister Erdogan’s characterization of Zionism as a crime against humanity, which is offensive and wrong… We encourage people of all faiths, cultures, and ideas to denounce hateful actions and to overcome the differences of our times.”  Source
UN Secretary-General Ban Ki Moon: Mr. Erdogan’s comment was “not only wrong but contradicts the very principles on which the Alliance of Civilizations is based… The Secretary-General believes is it is unfortunate that such hurtful and divisive comments were uttered at a meeting being held under the theme of responsible leadership.”  Source
US Secretary of State John Kerry: “We not only disagree with it. We found it objectionable.” Source
Senior US State Dept. Official:  “This was particularly offensive, frankly, to call Zionism a crime against humanity”… The pattern of Turkish denunciations of Israel is having a “corrosive effect” on American-Turkish relations. Full transcript
Austrian Foreign Minister Michael Spindelegger: “This equation is completely unacceptable.” The statement “is diametrically opposed to all that is the Alliance of Civilizations, co-founded by Turkey.” Source
German Foreign Minister Guido Westerwelle: “These remarks are hurtful and unacceptable.” Source
Canadian Foreign Minister John Baird: “We deplore them.”   Source
EU Special Envoy Andreas Reinicke: “Not helpful and unacceptable.” Source