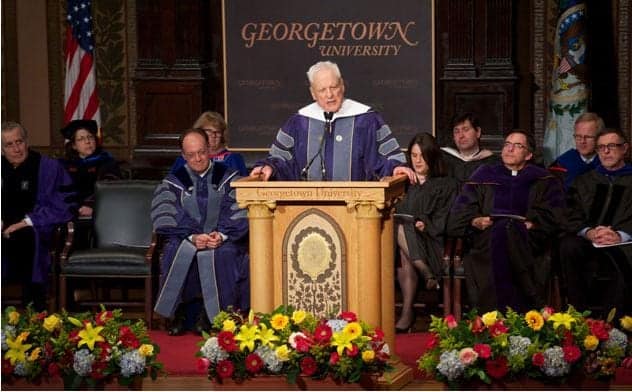 GENEVA, January 18 – UN Watch and its Board are proud to congratulate Chair Alfred H. Moses upon being bestowed with Georgetown University’s highest honor on Monday, before an audience that included U.S. House of Representatives Minority Leader Rep. Nancy Pelosi (D-Calif.) and Rep. Chris Van Hollen Jr. (D-Md.), along with colleagues, friends and family.

“We applaud Ambassador Moses for this prestigious honor,” said executive director Hillel Neuer, “and for his dedicated, exemplary and tireless work on behalf of UN Watch and its mission to uphold the founding principles of the United Nations Charter, protect universal human rights, and demand the equal treatment of all nations large and small.”

“In my four-plus decades of collaboration with Al,” said Chairman of Georgetown’s Board of Directors Paul Tagliabue, a colleague of Moses at the law firm of Covington & Burling, “he has always distinguished himself in balancing conviction, commitment to causes and passion on one hand, with reason, core values and common sense on the other hand.”

“Al has never forgotten his roots in his own community,” said Tagliabue, “while helping others over many decades to secure a place in their own communities.”

William Trainor, Georgetown’s executive vice president and dean of the Law Center, read Moses’ degree citation. Trainor noted Moses’ devotion to equality in his law and public service efforts. “As much as his work has been characterized by engagement with our world, it has also been grounded in deep thought, academic training and intellectual integrity,” Trainor said. “His success in the private sector is matched and even surpassed by his accomplishments as a public servant, diplomat and human rights advocate.”

“The award is certainly well-deserved,” said Tom Williamson, President of the D.C. Bar and Moses’ colleague at Covington & Burling. “I think Al has fulfilled the highest ideals of the profession both because he has been extraordinarily effective in representing others as a lawyer but, more importantly, he has really taken those skills into the public and international sphere and used them to really benefit and advance the interests of the thousands of others who otherwise would have suffered or been denied rights.”

FORMER UNITED STATES AMBASSADOR to Romania Alfred H. Moses (Law ’56) received an honorary degree from Georgetown Monday for his work as a diplomat, public servant and attorney.
Moses, who served as ambassador to Romania during the Clinton administration from 1994 to 1997, “exhibited both a tireless commitment to justice and exceptional skill as a political advocate,” according an honorary degree citation read by Georgetown Law Center Dean William Treanor.
“After working on the ground in Romania with allies in the U.S. government, and with other organizations, this persistence paid off, as Romanian Jews gained the freedom to emigrate from behind the Iron Curtain,” the citation reads.
RIGHT THING TO DO
A longtime partner and senior counsel at Washington D.C.-based law firm Covington and Burling LLP, Moses also served as special advisor and special counsel to President Jimmy Carter and special presidential emissary for the Cyprus Conflict from 1999 to 2001.
Moses said he considered his acts less heroic than simply the right thing to do.
“I only dealt with the victims, with the symptoms,” Moses said. “… I was simply one who came to help. And what I did was instinctive and what anyone would do under such circumstances.”
THE IRON CURTAIN
Moses saw the plight of Jews in Romania during his first trip to the country in 1976 as part of an American Jewish Committee delegation.
He said the Iron Curtain era of international politics, especially in Romania, was a dark period.
“It was the great divide,” Moses described. “Unless you experienced it, you can’t imagine what it was like. It was the land of eternal darkness. The fog was like [it is today] in Washington but it never lifted. It was as close as being in Dante’s Inferno as I ever hoped to get.”
CALIBER OF SERVICE
Because of his successful efforts, Moses became the first and only American in 2002 to receive Romania’s highest award: the Marc Cruce Medal. 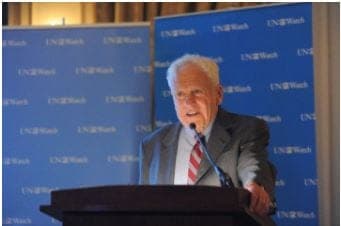 Moses currently serves as honorary president of the American Jewish Committee, chair of U.N. Watch and on the boards of the Project on Ethnic Relations; the International Council of the Museum of the Jewish People in Tel Aviv; and the International Board of Trustees of the Institute for National Security Studies.
“It is for this caliber of service – for the integrity with which he has conducted his life and career – and for contributions to our country and our global family that we honor Alfred H. Moses this evening,” said Georgetown President John J. DeGioia. “It is for his work and his accomplishments and the model he offers to us, that we present him with our university’s highest honor.”
REMEMBERING THE OPPRESSED
Moses credited Georgetown for its work helping those who are oppressed in the world as part of the university’s Jesuit tradition.
“Our leaders will come from the ranks of Georgetown, that not only survives for 200 years but flourishes as a symbol of liberal learning which searches for truth in the Jesuit tradition,” he said. “Georgetown remembers the oppressed and needy and that’s the highest obligation that we share as human beings.”
PrevPreviousIssue 405: Georgetown University Bestows Highest Honor on Chair of UN Watch
NextIssue 406: Celebrating Equality on Martin Luther King Jr. DayNext

UN Watch was quoted in multiple media outlets during September 2021 on topics including:  Countries drop out of Durban IV conference; Taliban request to speak