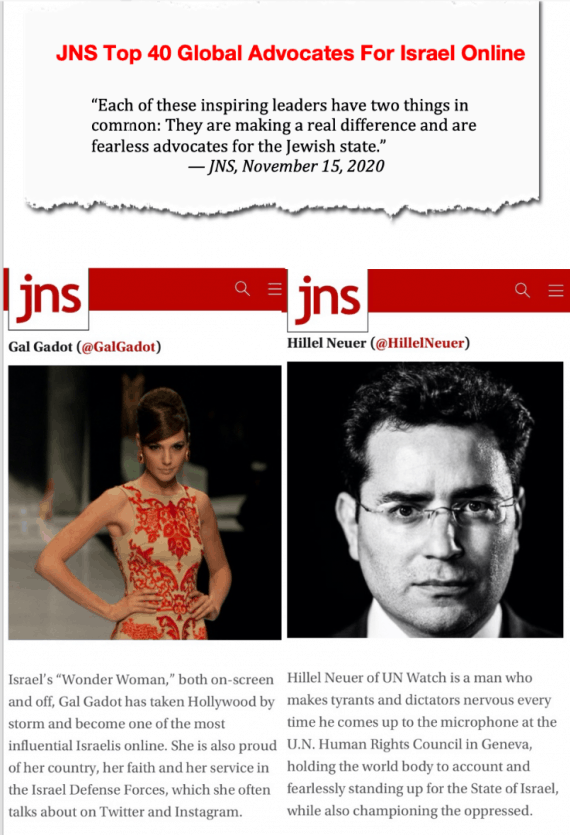 UN Watch’s executive director Hillel Neuer has been listed among the world’s top 40 global advocates for Israel online by the Jewish News Syndicate (JNS), together with Gal Gadot and other personalities.

“Each of these inspiring leaders has two things in common: He or she is making a real difference, and is a fearless and tireless advocate for the Jewish state,” said JNS.

“Hillel Neuer of UN Watch is a man who makes tyrants and dictators nervous every time he comes up to the microphone at the U.N. Human Rights Council in Geneva, holding the world body to account and fearlessly standing up for the State of Israel, while also championing the oppressed,” reads the citation.

Friends and former honorees of UN Watch who also made the list, several of them cited for their speeches at the UNHRC on behalf of UN Watch, include Col. Richard Kemp, MK Michal Cotler-Wunsh, Dr. Einat Wilf, Bari Weiss and Miss Iraq Sarah Idan.

Neuer recently surpassed 100,000 followers on Twitter, making him one of the world’s most influential pro-Israel voices on the primary social media platform used by political leaders, journalists and activists.

UN Watch’s own account also continues its impressive growth on Twitter. In just the past two months alone, UN Watch’s followers increased by 33 percent, reaching over 90,000.

Tweets during this period received thousands of shares and views, catching the attention of thought and opinion leaders from around the world. See several examples below.

Maduro on U.S. elections: “In Venezuela, the results are known on the same night.”

Actually, even the night before. https://t.co/x0HAuKdmUN

No joke: the U.N. just adopted a resolution referring to Jerusalem’s Temple Mount solely by its Muslim name of Haram al-Sharif, one of seven resolutions passed today that single out or condemn Israel, with zero on the entire rest of the world.https://t.co/ubiVccF0sc

🇹🇷 Turkey is inciting against its Armenian citizens, and hundreds are being forced to leave.

🇹🇷 Turkey’s representative is President of the 2020-2021 U.N. General Assembly.

Why is it that the countries now going crazy over cartoons in France are the very same who are not only silent at China herding 1 million Muslims into camps, but actually signed a letter at the U.N. praising Beijing’s actions? https://t.co/gKeAKIgFIL pic.twitter.com/9bXwpDvITO

The inmates are running the asylum. pic.twitter.com/O9ePHirNES

🇨🇳 China just interrupted me at the United Nations & tried to stop me from speaking after I asked why a regime that herded 1 million Muslim Uighurs into camps is sitting on the 5-nation UNHRC panel that nominates the next UN experts on arbitrary detention & forced disappearances. pic.twitter.com/5XUqq7Zye1