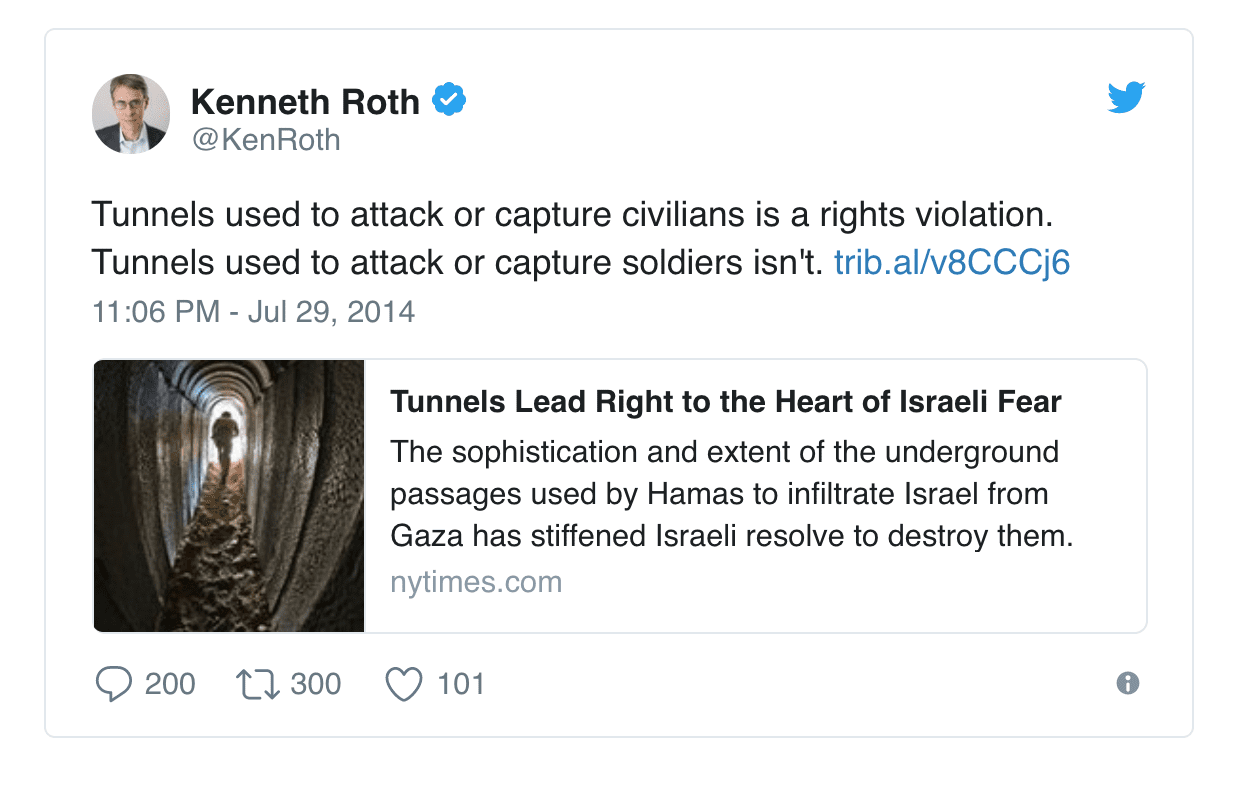 Kidnapping 3 Israeli boys is wrong. So is killing 2 Palest'n boys posing no imminent threat. Join me to condemn both? http://t.co/bssHoRDJ6l

3 abducted #Israel boys should be released "immediately & unconditionally," but no excuse for arbitrary arrests: @HRW http://t.co/Jq57e0T2nL

He can't stop: @KenRoth again finds way to mention kidnapping of Israeli teens – "but" to slam Israel. See above and: http://t.co/5Z2QohJMAP

Of all the UN rights chiefs & NGOs (e.g. @KenRoth) that hailed Palestinians 4 signing rights treaties, none ask them to comply. #justsaying

PA's Abbas: Will Netanyahu “condemn the kidnapping & killing” of Muhammad “as we condemned" that of 3 Israeli teens? http://t.co/qpSoq9SbIs

#Israel should bring to justice kidnap-killers of 3 teens, not create more injustice through collective punishment. http://t.co/dAOn7OU98j

Rather than defend "increasingly indefensible Israeli behavior," US hints it won't "carry diplomatic water" as much. http://t.co/5P59ZRiosA

#Israel apparently deceived public to think 3 kidnapped teens were alive when it knew they were almost certainly dead http://t.co/xjvvoB7Si7

Does anyone remember another Israeli official calling possible Israeli killing of Palestinian "an act of terrorism"? http://t.co/pzlW6XE7oR

As evidence suggests 16yo Muhammad was burned alive as possible revenge, #Israel police brutally beat his 15yo cousin http://t.co/aXMHH40Rwa

.@KenRoth You’re projecting: it was you who refused to condemn murder of “illegal” Israeli teens w/o qualification: http://t.co/z1BldebMyf

.@KenRoth You praised PA for signing int’l covs; so why u & @HRW colleague @sarahleah1 silent as PA gov partner fires rockets at civilians?

This Ramadan, Gaza suffers under #Israel attack: half of 100 dead are civilians, hospitals running short of supplies. http://t.co/2BgX7zZXOl

Warning northern Gazans to flee doesn't mean Israel can target those left http://t.co/IcrCZQClGb as it did in Lebanon http://t.co/GlAvTye7Q6

Stopping rocket attacks or fighting occupation may be reason to go to war but it's no justification for war crimes. http://t.co/oL0MhB9fFg

#Israel warns eastern #Gaza city residents to evacuate, suggesting (contrary to law) that anything goes if they don't pic.twitter.com/QbxDxADySQ

Summary of toll through July 15 on both sides of this latest round in the Israeli-Palestinian conflict, via @NYTimes. pic.twitter.com/pHLi80RQRp

#Israel's economy is booming, so even US conservatives question why US still pays for its arms (which kill civilians) http://t.co/Un4bnLbZP0

#Israel partisan diversionary tactic of pointing out that someone else is worse doesn't justify Israel's violating law protecting civilians.

If anyone can identify any meaningful difference now between Hamas' social media feed and that of HRW director @kenroth, please let me know.

#Israel's use of flechettes in a densely populated area such as Gaza can easily become indiscriminate. http://t.co/ivovnhqlIj

If #Israel's "precise" air war produces these civilian casualties, one must shudder at what the ground war is doing. http://t.co/e1EAzMaJrL

Dear @KenRoth,
You claim to be fair, but you pushed for UN inquiry knowing it’d produce this Hamas-supporting draft: http://t.co/ySHxKxdrxh

US is shamefully alone in opposing UN rights council investigation for #Gaza. It passes anyway, 29 to 1; 17 abstain. pic.twitter.com/2cpLl6EoRV

#Israel seems to use argument against "moral symmetry" with Hamas to seek immoral exemption from Geneva Conventions. http://t.co/3PxQk6vidp

The "two-state solution" as seen from besieged #Gaza. pic.twitter.com/H2c4p1iVy6

Cheap excuse. There were no "human shields" when Israel targeted boys on beach, attacked hospital, killed 25 in house http://t.co/uu4UvWgWhs

Gaza civilians aren't deserving of protection because they elected Hamas?! That's the logic of terrorism. http://t.co/iRp2pwqAKZ

Hi @KenRoth,
Lovely to debate your chap Bill on Al Jazeera. 1st he said Hamas terror tunnels = a “slogan.” Then he said it, too. Progress!

UN rights council recently launched investigations for Syria, SriLanka & NKorea but when it does for Gaza (both sides) it's accused of bias.

Israel's obligation to do all feasible to protect civilians persists even if they ignore its warning to evacuate. http://t.co/qMRO0vetvv

.@KenRoth @GerardAraud No, Ken. US vetoes resolutions for the US. It's a tool, used for good to counter bias, for ill to shield villains.

Remember when #Israel insisted Hamas was behind kidnap-murder of three West Bank teens. Oops, turns out it wasn't. http://t.co/Ltbfbi0kvk

Should Israel or Hamas go to war? @HRW takes no position, but we insist that if at war both sides respect Geneva Conventions. Neither is.

To those asking what I'd do if Hamas were firing at me, my response: I'd carefully target only combatants, not recklessly kill civilians.

Palestine will pursue "all available legal & political" means to bring war criminals to justice but no mention of ICC http://t.co/PlPBspvlAQ

When Hamas-Israel war ends, @kenroth will still have his hourly ghost-written tweets on global killings—but nothing to personally obsess on.

The Anti-Racist: in past week as Paris mobs attacked synagogues, @kenroth spoke on #antisemitism only to #deny it: https://t.co/pnL126w7RZ

.@KenRoth Are you so busy defending Hamas' right to kidnap Israeli soldiers that you've 0 to say on THIRD Hamas rocket cache @UNRWA school?

@HillelNeuer Too much time on your hands, but not enough time to read the front page of the NY Times: http://t.co/GySzJIZmYw

@HillelNeuer I see. I was right about the role of #Israel in US policy on #Egypt today (see NYTimes) but wrong about it a few days ago. Weak

.@KenRoth just blamed #Israel for 'juvenile' tweets by random supporters. Is there ONE example of him blaming #PLO, #Hamas, #Iran for same?

@billy_richling @KenRoth What do you mean? He said he judged Israel's conduct by the "juvenile nature of many Twitter replies."

.@KenRoth But you lobbied 4 Islamic bloc's UN res that condemns Israel 18 times and Hamas 0 times. So your "I'm balanced" pose fools no one.

Oops: turns out @KenRoth’s “indiscriminate” charge was a complete lie: out of 137 killed in Gaza, 71 were terrorists. http://t.co/ovapdA6EMy

HRW director @KenRoth’s support for Hamas is no justification for Egypt to deny him entry.

No, @Marianhouk, it's no joke. I repeat: @HRW director @KenRoth’s support for #Hamas is no justification for #Egypt to deny him entry.

.@KenRoth’s renewed support for Hamas war effort, via bid to deny Israel defense, doesn’t justify his deportation out of Egypt on Monday.

Six Ways Hamas Could Limit Civilian Casualties in Gaza: http://t.co/SAKS7JSlex During the war, why did #HRW's @KenRoth never publish this?

.@KenRoth You may have $228 million in bank, but I'm not scared of you. Your Israel mania draws you to back Hamas, enemy of human rights.

Dear @KenRoth,
Why as head of a rights org do you go out of your way to justify the acts of a murderous, misogynistic & anti-gay terror org?

.@KenRoth We know, Ken, but you're dodging the question: Why is a human rights activist going out of his way to legitimize Hamas attacks?

MT @KenRoth Can you tell if Boko Haram weapons are used to capture combatants (legal) or attack civilians (illegal)? pic.twitter.com/i7cdnHouT0

MEMO
———
FROM: @KenRoth
TO: V. Putin
As head of Human Rights Watch, I just wanted you to know that Int'l Hum'n Law allows aggression.

FROM: Human Rights Watch
TO: Nasrallah
RE: Aggression
It's my mission to let you & all terrorists know: IHL allows it! Enjoy.
Best,@KenRoth

.@KenRoth But the real issue, which you continue to dodge, is why you go out of your way to publish “IHL allows” tweets to support #Hamas.

.@KenRoth And unlike your relentless “IHL allows” dispensations for Hamas tunnels + kidnapping, we haven’t seen any of same for IDF defense.

MT @KenRoth Can you tell if ISIS weapons are used to kill U.S. soldiers (IHL allows; not a human rights violation)? pic.twitter.com/dfCeMSqOl4

This is not the first time that the head of Human Rights Watch has been caught trying to inject Israel everywhere: https://t.co/aQ2v3U9tpA

Despite what @KenRoth says, human rights activists should condemn Putin's invasion of Ukraine in violation of the UN Charter & Rome Statute.

An Israeli nation confident it had acted properly wouldn't have barred radio broadcast of names of #Gaza kids killed. http://t.co/cNlxr2tRd4