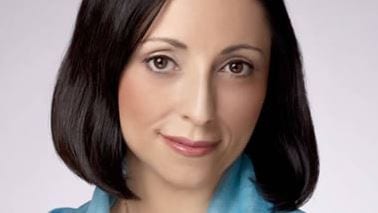 GENEVA, May 14 – Geneva-based human rights group UN Watch announced today that it will be awarding its prestigious annual human rights prize next week to Iranian dissident and best-selling author Marina Nemat, now living in Canada, who was jailed and tortured as a political prisoner in Tehran when she was only 16 years old.
“UN Watch is honoring Marina Nemat for her brave and outstanding work worldwide in bearing witness to the horrific crimes perpetrated against her by a regime that continues to assault, jail, torture, rape and execute human rights defenders, religious, ethnic and sexual minorities, and thousands of other innocent men, women and children,” said UN Watch executive director Hillel Neuer.
“Marina’s clear and compelling testimonies, published in best-selling books and delivered before the United Nations and numerous other global audiences, have helped stir the conscience of mankind to demand fundamental human rights for the voiceless victims of Iran, whose plight has only worsened in inverse proportion to the charm offensive of its rulers.”
In a recent report, UN chief Ban Ki-moon rebuked Iranian President Hassan Rouhani for the regime’s increased use of capital punishment since the new ruler took office in August. “At least 500 persons are known to have been executed in 2013, including 57 in public. Those executed reportedly included 27 women and two children,” Ban said.
At the Geneva ceremony to be held on May 22, 2014, next to the UN Office of the High Commissioner for Human Rights, Nemat will address an audience of UN officials, ambassadors and community leaders, as she receives the Morris B. Abram Human Rights Award, named after the civil rights advocate, diplomat and UN delegate who founded the watchdog NGO in 1993.
Morris B. Abram (1918-2000) worked closely with Rev. Martin Luther King, winning key legal battles for the equal rights of African-Americans. Over three decades, Abram was a leading figure at the UN Commission on Human Rights, and at its Sub-Commission on the Promotion and Protection of Human Rights.
Previous winners of the prestigious prize include Russian dissident and world chess champion Garry Kasparov, Dr. Massouda Jalal, the first woman in Afghanistan to run for president and to serve as Minister for Women’s Affairs, and Esther Mujawayo, an activist for victims of the genocide in Rwanda.
UN Watch’s advisory board includes Nobel Peace Prize Laureate David Trimble, Chinese dissident Yang Jianli and Katrina Lantos Swett, Chair of the U.S. Commission on International Religious Freedom.
The Geneva non-governmental organization is best known for bringing dissidents, human rights defenders and victims to testify before the United Nations, including most recently from China, Cuba, Egypt, Libya, North Korea, Syria, Sudan and Venezuela.
Each year, together with 25 NGOs, UN Watch assembles top dissidents to spotlight the world’s most critical human rights issues at its annual Geneva Summit for Human Rights and Democracy, where Nemat spoke in 2013.
“I am honored to receive UN Watch’s award and will accept it on behalf my fellow political dissidents, who are currently being tortured in Iranian jails despite Rouhani’s promise to improve the protection of political freedoms,” said Marina Nemat.
Nemat was just 16 in Tehran was she was arrested for criticizing the sudden Islamicization of her school curriculum. She was jailed in Tehran’s infamous Evin prison, tortured, and sentenced to death. As recounted in her best-selling memoir Prisoner of Tehran, which has been printed by dozens of publishing houses around the world, Nemat was forced to marry a prison guard to save her life and her family.