Appeal for the Lost Children of Cambodia
Delivered by Cindy D. Tan,
Richard and Rhoda Goldman Fellow at UN Watch 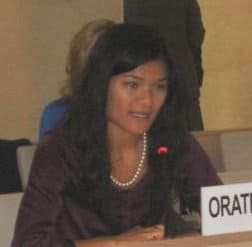 UN Watch extends its appreciation to Prof. Subedi, the Special Rapporteur for Human Rights in Cambodia, and we welcome his report.

For me, this topic is not academic. I am a child of Cambodia. My parents were forced into labor for four years during the Cambodian genocide. My mother was raped, and my father was burned with cigarettes. My family died in those camps.

To this very day, the legacy of genocide continues to claim victims in Cambodia, and I urge this Council to address their plight.

Every year, two million women and children are sold into sexual slavery. Many are sold for $10. Many are under the age of 5.

Every year, children become trapped by abject poverty and are forced into hard labor. They suffer from disease and abuse. This is their fate.

Professor Subedi, will you, in your next report, address the urgent situation of child labor?

Your report states that there is a disconnect between law and reality. Cambodian law prohibits domestic violence, yet the statute defines no penalty. Cambodian law entitles citizens to the right of land, yet thousands have been evicted. The Khmer Rouge officials who destroyed this country still possess the reins of government. If we are to make any progress, we must focus on strengthening the rule of law.

Professor Subedi, we recognize the enormity of the task. Millions of Cambodian men, women and children look to the United Nations for help. We are counting on you.