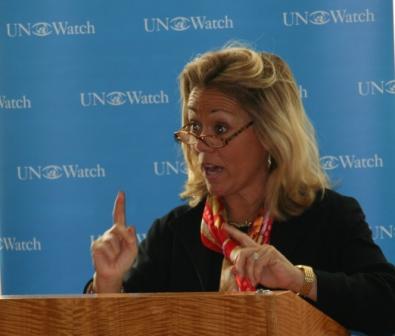 GENEVA, Oct. 27, 2010 – As world diplomats met to kickstart the 2011 review of the U.N.’s controversial Human Rights Council, the U.S. government laid out its policy toward the 47-nation body in a detailed policy address delivered yesterday at an annual gathering of UN Watch members in Geneva.

Ambassador Eileen Chamberlain Donahoe, the Obama Administration’s representative to the council, outlined the U.S. government’s successes, challenges and future priorities at the council, by addressing each of the eight points set forth in UN Watch’s action plan for reform, which she said offered “excellent benchmarks for where progress is needed.”

Click here for the full text of Ambassador Donahoe’s remarks, which touched on the U.N.’s upcoming review of America’s human rights record, holding Iran to account for its crimes, and combating the biased and selective treatment of Israel. Following is our summary.

•   The UN Watch mission statement aligns very closely with the reasons behind President Obama’s decision to seek membership at the Council.  Well aware of the weaknesses of the Council, the United States chose to practice our creed of “principled engagement,” by seeking to improve the work and functioning of the Council from within.

•   For our discussion, I thought it would be useful to look at the eight-point action plan outlined by UN Watch earlier this year, in your “Report and Scorecard with Recommendation for U.S. Government Action” at the Human Rights Council.   This plan provides excellent benchmarks for where progress is needed. We take seriously UN Watch’s recommendations to the U.S.government on how to refocus the work of the UN Human Rights Council.

(1) Holding the worst violators to account is one of Washington’s top priorities and probably our most difficult task–because of the political dynamics and working culture of the Council, where any type of country specific initiative can be perceived as an exercise in “naming and shaming” or “North-South” criticism. This is an area where we are in an uphill battle.

•   There were resolutions on Burma, North Korea, Cambodia, and Sudan, and a meeting to address mass rapes in DR Congo. In June the U.S. garnered support from 55 cross-regional partners to condemn the abominable human rights violations in Iran on the one-year anniversary of the contested election.

•   It is very clear that we must do more. As part of the 2011 review exercise one of the top priorities of the U.S. will be to find a way to develop and reinforce mechanisms to move the Council in the direction of holding human rights violators to account.

(2) Protection of freedom of speech is a guiding principle for our engagement at the Human Rights Council.  We are committed to working with genuine partners on the issues of racial and religious discrimination, including the Organization of the Islamic Conference, but we have made it clear to all parties that we will not, under any circumstances, do so by allowing the advancement of unacceptable limits on the freedom of expression and religion. We will continue to champion protection of these fundamental freedoms throughout our tenure on the Council.

(3) Ending discriminatory and unequal treatment of Israel: The United States has vigorously and unequivocally protested the politicized efforts of some Council members to continually target Israel especially while they ignore serious problems in their own countries and around the globe.  Since taking up membership, the United States has consistently voted “No” on biased Council action against Israel, and we will continue to vote our conscience on such issues, even when it isolates us in the Council.

•   The United States is also working to normalize the Council’s treatment ofIsrael through other means, by welcoming Israel into the JUSCANZ informal consultation group of like-minded, democratic countries.  And we have been a leading advocate of removing the council’s special agenda item on Israel during the 2011 review process and remain firmly committed to that goal.

(5) Oppose the election of violators to the Council: The Council will only be as good as its members.  Our goal is to make sure that those elected are governments with exemplary human rights records and sincere commitments to promoting human rights internationally.  In the spring the U.S. and others mobilized to block Iran’s election. We are working through the 2011 Review process to strengthen the selection process to produce more qualified membership.  This will generate a great deal of resistance, but we will continue to promote the election of qualified members.

(7) Defend independent rights monitors: Supporting the work of the Council’s independent mandates is one of the best ways we can ensure that some of the world’s worst human rights abuses are brought to light.  In September, a U.S.-led initiative established a Special Rapporteur on the Rights to the Freedom of Peaceful Assembly and of Association. The council also created a Working Group on Discrimination Against Women Under the Law and in Practice. We are looking at ways to strengthen and defend the work of existing mandate-holders in the 2011 Review process.

(8) Strengthen the Universal Period Review: The UPR is widely viewed as the most significant improvement in the council compared with the former Commission on Human Rights, because it instituted a universal review of the human rights record of every country in the UN system.

•   The U.S. UPR will take place on November 5th.  The U.S. government worked hard over the past year to facilitate what we see as a model of engagement with civil society, for the purpose of strengthening our own human rights practices at home.   While we recognize that we are far from perfect in terms of our own human rights record, and we do expect some exuberant and unfounded criticism, we believe that participation in a thorough, open and transparent process is the way to improve our own practices, as well as to help improve the UPR process of others.  We are firm in our conviction that the power of the United States to influence the international human rights dialogue is most potent when the U.S. leads by example.  We will look for ways to improve the UPR process through the 2011 Review as well.

•   In summary, the U.S. sees its work at the the Human Rights Council as a challenging but valuable opportunity to make a difference on human rights. The council is engaged in a serious self-reflection exercise via the 2011 Review process with the goal of improving its work and effectiveness.  U.S. participation and leadership are essential to helping move the Council in the right direction. For the United States, our job at the council is to give voice to the voiceless and defend the fundamental freedoms we cherish.  I look forward to working with UN Watch and all our committed partners to further those goals.