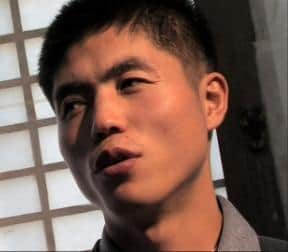 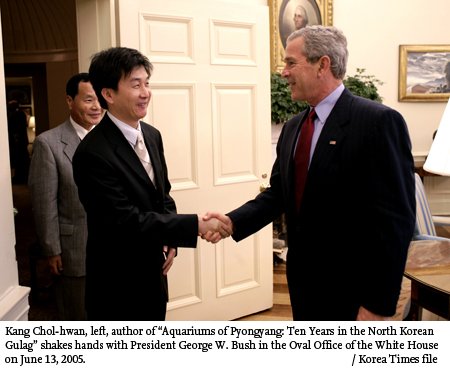 GENEVA, Feb. 11 – Intensifying appeals by UN officials, diplomats and rights campaigners for an 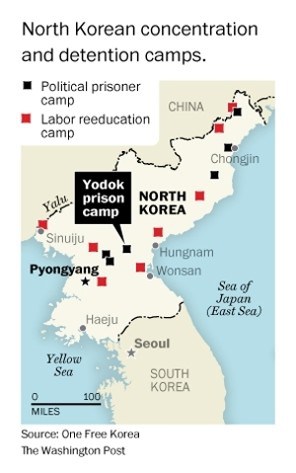 international inquiry into North Korea’s vast archipelago of political prison camps, to be debated soon by the UN Human Rights Council, will get a massive boost next week when two of the gulag’s most famous survivors and witnesses will testify before a parallel Geneva summit of dissidents and democracy activists, organized by UN Watch and 20 other human rights groups.
Shin Dong-Hyuk, the only known surviving escapee from a North Korean “total control zone” camp, will join author Kang Chol-Hwan, who survived 10 years in the notorious Yodok concentration camp, to headline the 5th annual Geneva Summit for Human Rights and Democracy, to be held next Tuesday, on February 19, 2013.
UN Watch has brought numerous North Korean victims and activists to speak at the UN, and leads NGO campaigns to confront the murderous dictatorship within the world body’s assemblies. (Left: UN Watch demonstration against North Korea, August 2011.)
In January, UN rights chief Navi Pillay called for a “full-fledged international inquiry” of serious crimes committed by North Korea, “one of the worst human rights situations in the world.”
And last week, Marzuki Darusman, the 47-nation council’s monitor on North Korean human rights violations, seconded the call, urging an investigation of Pyongyang’s “grave, widespread and systematic violations of human rights.” NGOs in the coalition organizing next week’s Geneva summit are hoping that the testimonies of Shin and Kang— to be delivered before hundreds of UN diplomats, activists and journalists—will add powerful momentum to the campaign, days before world leaders gather to open the UN session.
“Shin Dong-hyuk isn’t just somebody who was sent to a concentration camp,” said Anderson Cooper, who recently interviewed the North Korean survivor on 60 Minutes.
“This is somebody who was born into a concentration camp. And for the majority of his life up until he was probably 22 or 23, had no idea that there was another kind of way to exist.”
Shin told Cooper the stunning story of how he escaped from Camp 14, a brutal political prison in North Korea. 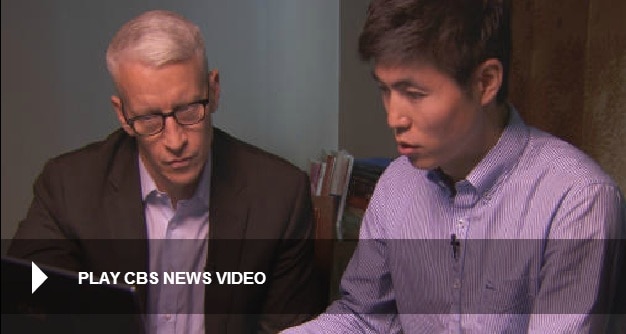 At the Feb. 19th conference, Shin and Kang will tell of the forced labor, extreme hunger, violence and brutality they suffered, and of the numerous public executions they witnessed.
Shin was made to watch his mother and brother executed. Having been born and raised within the camp’s Orwellian moral universe, he was the one who had informed on their plan to escape.

The North Korean survivors will be joining other famous activists at the Geneva Summit from China, Cuba, Iran, Kazakhstan, Russia, Sudan, and Syria, in a concerted effort to influence the human rights agenda.

The widely acclaimed annual conference, a focal point for dissidents worldwide, is timed to take place in Geneva days before foreign ministers gather to open a month-long UN Human Rights Council session on Feb. 25, 2013.
For activists and journalists, the global gathering provides a one-stop opportunity to hear from and meet frontline human rights advocates, many of whom have personally suffered imprisonment and torture.
The speakers’ compelling and vivid testimonies will seek to inform the UN delegates just prior to their debates on human rights situations around the world.
Topic areas will include discrimination against women, jailing of journalists, prison camps, Internet freedom, religious intolerance, and the persecution of human rights defenders.
For a full line-up of the parallel summit’s speakers,click here
Now in its fifth year, the Geneva Summit has won widespread coverage by major wire services and newspapers, as well as television and radio news outlets. Videos of past speaker testimonies are available at www.genevasummit.org.
Admission to this year’s February 19, 2013 summit is free to the public and media, but registration is mandatory.
For accreditation, program and schedule information, visit www.genevasummit.org.