GENEVA, June 2, 2014 – The Geneva-based human rights group UN Watch presented its 2014 Moral Courage Award to Canadian cabinet minister Jason Kenney, one of the country’s most influential national figures, at its annual Geneva gala on May 22nd. His compelling remarks feature below. 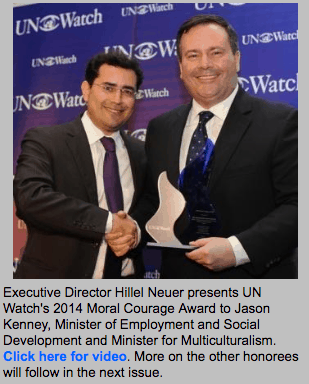 The Dalai Lama sent a special envoy to the Geneva ceremony, which was attended by UN officials, ambassadors, and community leaders, along with Canadian Health Minister Rona Ambrose.

To appreciate Minister Kenney’s principled positions, see selections below from his candid remarks as delivered at the gala.

“I recall being at an international conference in London around the time just after Canada announced our withdrawal from Durban II, and the minister of another government, whom I won’t mention for diplomatic reasons, came up to me and said, ‘Why exactly have you Canadians decided to do this?’

And I thought for a moment and said, ‘Well, listen, I can give you an hour’s worth of reasons for why we’ve withdrawn from Durban, but I’ll save both of us a lot of time and just give you one: Iran is the vice-chair of the conference. Argument is over!’”  Click for video

On Iran’s Torturer-in-Chief Speaking at the UN Human Rights Council — and the Importance of UN Watch Calling Out the Hypocrisy:
“An Iranian-Canadian woman named Zahra Kazemi went back to be a witness. She was a photojournalist. In 2005, she returned to Iran to record the democratic longings of the Iranian people, the persecution of gays, Bahais, Christians and other religious minorities.
Because of her moral courage she was arrested in Evin prison. She was tortured and murdered by a man named Saeed Mortazavi who was then Prosecutor-General in Tehran.
When our government came to office in 2006, we learned a few months later that Saeed Mortazavi was coming to Geneva to participate with the Iranian delegation at the hearings of the UN Human Rights Council.
And that one story tells you all you need to know about why we need UN Watch. Why we need to hold that and similar bodies accountable.
Why we need — when others would listen to the seductive voice of diplomatic politesse — why we need a Hillel Neuer standing at the microphone as an observer, calling people to account for allowing monsters like Saeed Mortazavi to have a microphone at a body dedicated to human rights. It’s wrong! And UN Watch is right to call those people to account.” Click for video
On the Mission of UN Watch:
“To its great credit, UN Watch is doggedly, consistently focused on a very simple objective, which is to hold the United Nations to account to its own stated principles, of its founding charter. Such as, the first words in the preamble of the UN Charter from 1945: ‘the UN is founded to reaffirm faith in fundamental human rights and the dignity and worth of the human person’.”
On the New Anti-Semitism:
“What do I mean by ‘the new anti-Semitism?’ I mean a growing acceptance of the unique an growing vilification of Israel and the new apologetics that try to hide or explain away the underlying anti-Semitism.
Today, there are those who are trying to strip the State of Israel if its citizenship in the international community, minimize its natural rights as a sovereign state, and even deny its right to exist.

“As Prime Minister Steven Harper has said, Canada has a purpose in the world, and that purpose is no longer just to go along with everyone else’s agenda. It is no longer to please every dictator with a vote at the United Nations, and I confess that I don’t know why past attempts to do so were ever thought to be in Canada’s national interest. He went on to say, ‘Now we know where our nterests lie and who our friends are, and we take strong principled positions in our dealings with other nations whether popular or not and that is what the world can count on from Canada.’The new anti-Semitism has adopted even more sophisticated language than the old one. Instead of targeting the Jewish people, it now targets the Jewish homeland but it ultimately espouses the same ancient hatred and the old intent. Of course, criticism of Israel cannot in and of itself be regarded as anti-Semitic, however, if and when that criticism selectively condemns, selectively condemns and denies the only Jewish state’s right to exist, it cannot be considered anything but anti-Semitic.”
Canada Will no Longer Go Along to Get Along
“I’m proud to repeat those words to you today, and I’m proud to receive this award on behalf of all my colleagues and Prime Minister Harper, to wish you continued success, to Hillel and the entire UN Watch team, as they continue to be a voice for the voiceless and speak truth to power. Thank you very much.”
________________
Congratulatory Messages
Human rights dissidents, activists, and community leaders sent their congratulations to Minister Jason Kenney for receiving the UN Watch award. Click here to see messages from former Chinese political prisoner Rebiya Kadeer, international human rights advocate and MP Irwin Cotler, CIJA, Canadian Friends of Burma, African Diaspora Association of Canada, B’nai Brith Canada, Vietnamese Canadian Federation, All Pakistan Minorities Association, World Uyghur Congress, the Federation for a Democratic China, and others.