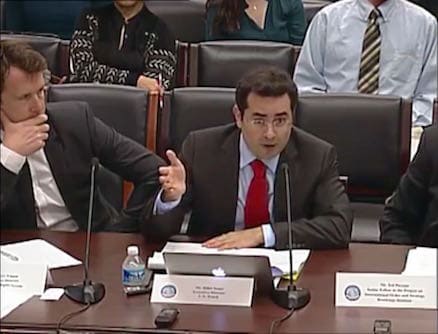 Hillel Neuer testifying before the U.S. Congress on Tuesday, May 17, 2016, Video to be available soon.

GENEVA, May 19, 2016 — In testimony on Tuesday before the U.S. Congress, at a packed hearing called to evaluate the UN Human Rights Council ahead of its 10th anniversary next month, UN Watch executive director Hillel Neuer connected that milestone with another that will be celebrated in Geneva at the same time: the 200th anniversary of the Frankenstein story, the product of Mary Shelley’s June 1816 nightmare, when she visited Lord Byron’s villa directly across the lake from where the UNHRC is today.

Neuer said: “I often walk past Villa Diodati. When I gaze across Lake Geneva and see the UN Human Rights Council, I cannot help but wonder: If Eleanor Roosevelt and Rene Cassin were alive, and beheld the sight of a body that grotesquely legitimizes murderers, dictators, and anti-Semites, would they not be revolted by what has become of their creation? Would they not conclude that today’s UN Human Rights Council has become Frankenstein’s monster, and their dream become a nightmare?”

Thank you, Mr. Chairman. We meet on the 70th anniversary of the UN Commission on Human Rights, whose creators gathered this week, in May 1946, one year after the Nazi atrocities. Eleanor Roosevelt became the founding Chair, and Rene Cassin, the eminent legal philosopher, the Vice-Chair. The founders had a dream: to reaffirm the principle of human dignity, and to guarantee fundamental freedoms for all.

Two years later, UN Secretary-General Annan called for scrapping the commission, identifying its politicization, selectivity, and credibility deficit—all of which “cast a shadow on the reputation of the United Nations system as a whole.”

By contrast, the UN promised that the new body would elect members committed to human rights, and address the world’s most severe abuses.

Ten years later, we ask: Is the new body living up to the UN’s promise of reform, and to the original dream, from 70 years ago, of Eleanor Roosevelt?

Let us consider the Council’s record in responding to gross violations. Thanks to the U.S., an important inquiry was created on North Korea. Yet over fifty sessions, only a tiny minority of countries have been condemned — less than what even the discredited old Commission accomplished.

To the vast majority of abusers, the Council grants impunity. In China, 1.3 billion people are denied freedoms of speech, assembly, and religion. 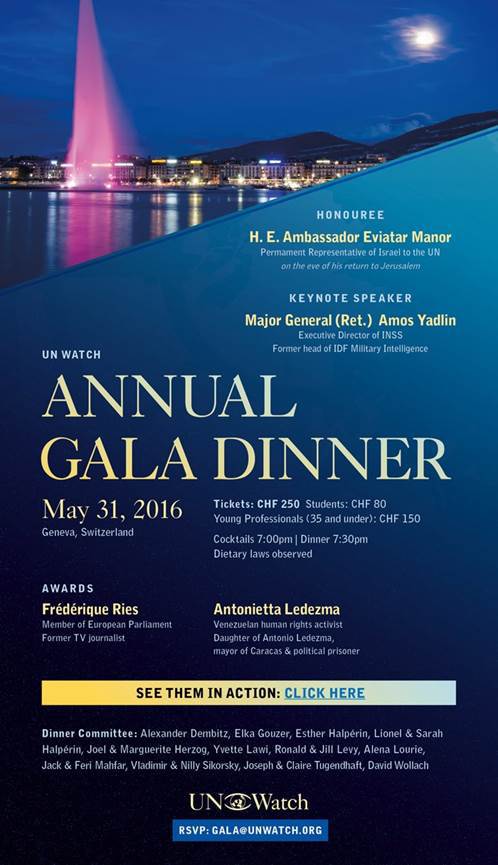 Nobel peace laureate Liu Xiaobo languishes in prison. Tibetans are trampled and tortured. The Council’s response? Not one resolution, special session, or commission of inquiry. No protection for one-fifth of the world’s population. On the contrary, in violation of the criteria guaranteed in the Council’s 2006 charter, China was elected as a member.
In Russia, dissidents are harassed, arrested, even assassinated. Vladimir Putin’s regime has sparked deadly wars, invading Ukraine and swallowing Crimea. The Council’s response? Silence. Over ten years, the Council never attempted to pass a single resolution condemning Russia—when even the discredited commission managed to adopt two. Nor did the Council create a single special session, monitor or inquiry. On the contrary: Russia, too, was elected a member.

In Saudi Arabia, women are subjugated, Christians are arrested for practicing their religion, democracy blogger Raif Badawi was sentenced to 10 years in prison and a thousand lashes, and beheadings are at an all time high. The Council’s response? Silence. A recent attempt to investigate Saudi Arabia’s carpet bombing of Yemeni civilians was quashed. Saudi Arabia, too, was elected a member.

And faced with compelling reports of torture in Algeria, forced child labor in Congo, attacks on dissidents in Cuba, abuse of foreign workers in Qatar, incommunicado detentions in the United Arab Emirates, the imprisonment of Caracas mayor Antonio Ledezma and other democracy leaders in Venezuela, and arbitrary arrests in Vietnam, what has the Council done, over its ten years, to protect these victims?

Absolutely nothing. On the contrary: the UN elected every single one of these abusers as a Council member. With 62% of the current membership failing the basic standards of a free society, the Council’s democracy credentials are, in 2016, the lowest in history.

Let us consider the Council’s new Universal Periodic Review, which purports to examine every country. While the U.S. uses it to apply real scrutiny, the vast majority abuse it to praise each other. I was there when China praised Saudi Arabia for respecting religious freedom, and when the next day Saudi Arabia praised China for respecting minority rights. That’s why our detailed study, available at unwatch.org, is entitled Mutual Praise Society.

Let us consider where the Council is active. Despite the promise of ending selectivity, the Council’s pathological obsession with demonizing Israelis, and denying their human rights, has never been worse. Since its creation, the Council has adopted 67 resolutions condemning Israel—and only 61 on the rest of the world combined. The texts on Israel are uniquely suffused with the suppression of any countervailing facts that might provide balance.

Its commissions of inquiry like the Goldstone Report, which excoriated Israel while exonerating Hamas, initiated a new era whereby a terrorist group has come to rely on the Council as an effective international tool to achieve its deadly goals. Hamas is incentivized by the UN to launch rocket attacks against Israeli civilians while placing its own civilian population in harm’s way.

And just now, the Council instituted a UN black-list of Israeli companies, to have the UN implement the anti-Israeli BDS campaign—boycott, divestment and sanctions—and to strangle the economic life of Israeli citizens.

Finally, let us consider the Special Rapporteurs and other experts appointed by the Council. A number do important work, such as Dr. Ahmed Shaheed, the expert on Iran. But far too many are wolves in sheep’s clothing, appointed by the dictatorships to pursue radical agendas in the name of human rights.

Who selects them? Last year the head of the Council panel that shortlists candidates was the representative of Saudi Arabia.

If Eleanor Roosevelt were alive, would she not agree that electing the misogynistic Saudi regime as Chair was, in the words of Reporters Without Borders, grotesque?

We are actually about to mark a third anniversary. Next month, Geneva will celebrate the 200th anniversary since Mary Shelley and her husband joined Lord Byron and others at Villa Diodati, in Geneva, right across from where the Council is today.

In that cold and gloomy June of 1816, amid the darkness, and storms of thunder and lightning, they exchanged ghost stories. Mary Shelley then had a nightmare, which she famously published: the story of an idealistic student who tried to create life, only to be horrified by its results, the story of Frankenstein.

I often walk past Villa Diodati. When I gaze across Lake Geneva and see the UN Human Rights Council, I cannot help but wonder: If Eleanor Roosevelt and Rene Cassin were alive, and beheld the sight of a body that grotesquely legitimizes murderers, dictators, and anti-Semites, would they not be revolted by what has become of their creation? Would they not conclude that today’s UN Human Rights Council has become Frankenstein’s monster, and their dream become a nightmare?

I believe the U.S. and fellow democracies can and must fight back, as outlined in my written remarks, and about which I will be happy to elaborate. Thank you.