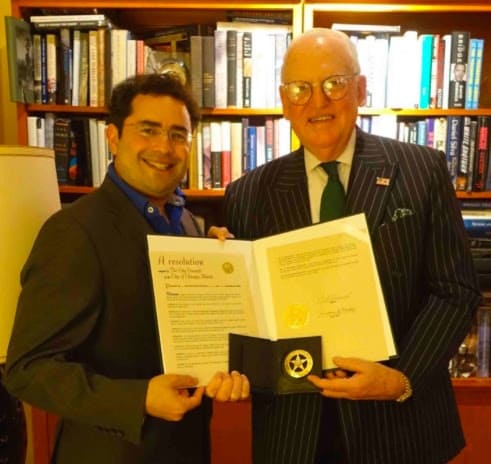 In honor of the visit by the executive director of UN Watch, the Chicago City Council adopted a resolution declaring today, September 15, 2016, to be Hillel Neuer Day, in recognition of his “contributions to promote peace, justice and human rights around the world.” Before an audience of 1,300 delegates, including diplomats and elected officials, Neuer delivered the keynote address today at the annual meeting of the Chicago Jewish Federation.
The city council resolution reads in part:
WHEREAS, UN Watch is a non-governmental organization based in Geneva, Switzerland that monitors the United Nations, fights bias against the State of Israel and promotes human rights; and
WHEREAS, In his role as one of the world’s foremost human rights advocates, Hillel Neuer has drawn global attention to both atrocities and injustice;
BE IT RESOLVED, That we, the Mayor and the members of the Chicago City Council, assembled this fourteenth day of September, 2016, do hereby welcome Hillel Neuer to the City of Chicago and do hereby recognize his contributions to promote peace, justice and human rights around the world; and
BE IT FURTHER RESOLVED, That Thursday, September 15, 2016, shall be officially recognized as Hillel Neuer Day throughout the City of Chicago. 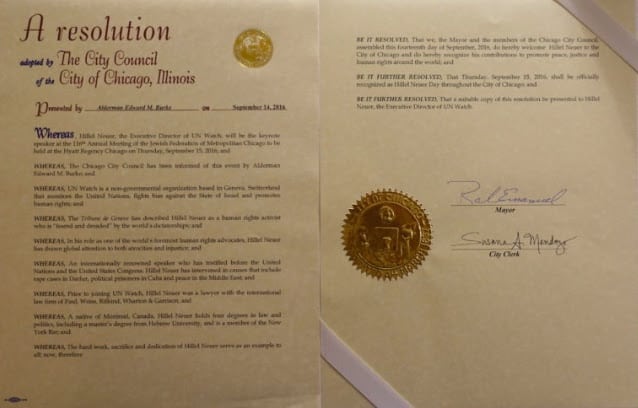 UN High Commissioner for Human Rights Zeid Ra’ad Al Hussein slammed Israel for non-cooperation, lumping it in with Iran, Syria, and North Korea
GENEVA, Sept. 14, 2016 — As reported in the Jerusalem Post, UN rights chief Zeid Ra’ad al-Hussein accused Israel on Monday of acting like Iran, Syria and North Korea by having “a long record of refusing to cooperate” with UN Human Rights Council inquiries and investigative mandates. However, UN Watch took the floor to remind al-Hussein that in the recent past he too has boycotted UN debates that he believes are biased and illegitimate.
In fact, noted UN Watch, Israel this week is hosting a UNHRC expert visit, and in the past has admitted more UN rights experts than almost any other country, as well as former UN rights chief Navi Pillay, both to Israel and the Palestinian territories.
In the presence of ambassadors and the High Commissioner himself, UN Watch exposed al-Hussein’s additional double standards, such as referring only to Palestinian territories as “occupied,” and his relative silence on grave abuses in Venezuela. Full speech below.
______
Statement delivered by UN Watch on report of the High Commissioner, Human Rights Council, 33rd Session, 14 September 2016.
Thank you, Mr. President.
We commend the High Commissioner for his statement highlighting abuses in many countries. At the same time, we wish to request some clarifications.
The High Commissioner rightly mentioned abuses by Venezuela, and said his office would speak out at “every opportunity.” If so, why has his Twitter account, followed by 1.5 million people, refused to post even one word on Venezuela over the past 6 weeks of escalating hunger, arbitrary arrests, and oppression?
The High Commissioner mentioned Crimea, Abkhazia, and Nagorno-Karabakh — yet failed to say that, under international law, these are occupied territories. Instead, he only used that term in one case: for the Palestinian territories. Why?
Finally, the High Commissioner criticized Iran, Syria and North Korea for refusing to cooperate with UN inquiries—and he then lumped in Israel with that list.
Let us be clear: UN Watch continues to demand that all countries cooperate with legitimate UN inquiries. But what if a UN mechanism is manifestly not legitimate?
The answer was provided three years ago by the High Commissioner himself, when he was Jordan’s ambassador to the UN.
In 2013, when the President of the UN General Assembly, Vuk Jeremic of Serbia, organized a debate about international tribunals, then-Ambassador Zeid refused to cooperate. He said: “When it became clear to us that there was a distinct agenda to this meeting—a ‘flavor’ to it—it seemed to me the president of the General Assembly was exploiting his position for a narrower aim, and that was unacceptable to us.”
Mr. President, when this Council’s inquiries prejudge Israeli guilt; disregard terrorist aggression; select biased judges who have done paid legal work for the PLO; and then hire biased staffers who are also spokespersons for the pro-Hamas flotilla—would not the High Commissioner agree, using his own words, that there is a ‘distinct agenda’, a ‘flavor’, to all of this?
Indeed, when this council literally has a distinct agenda item for Israel alone—next week’s Agenda Item 7—can there be any greater evidence of a ‘narrow aim’, which should be ‘unacceptable’ to all?
Thank you, Mr. President.