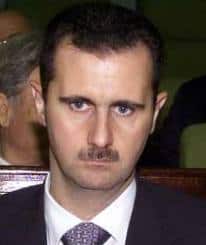 GENEVA, May 11 — A coalition of 25 human rights groups headed by the Geneva-based UN Watch cheered today’s withdrawal by Syria of its candidacy for a seat on the UN Human Rights Council. The Asian group is instead endorsing Kuwait, which will still need a minimum 97 votes in the UN’s May 20 election.

“The defeat and shaming of Syria’s murderous regime in the court of world opinion should be a morale boost for the courageous citizens of that country who continue to brave bullets and beatings to speak out for their universal human rights,” said Hillel Neuer, UN Watch executive director.

“It says a lot when Syria’s actions are deemed so reprehensible by the international community as to cause its rejection by a club whose members already include Bahrain, China, Cuba, Saudi Arabia, and other notorious human rights violators,” said Neuer.

“President Bashar Assad’s cynical bid to be named a global judge of human rights only underscores the hypocrisy and politicization that too often hobbles the work of the UN’s highest human rights body.”

“The UN’s Asian states never should have endorsed the brutal Syrian regime in the first place,” said Neuer. “While Kuwait is far better than Syria, it too fails to meet the basic election criteria, which require a genuine record of promoting and protecting human rights,” said Neuer. According to the U.S. State Department, Kuwaitis are subjected to “limited freedoms of speech, press, assembly, association, and religion” and women are denied equal rights. Freedom House ranks it as only “partly free.”

UN Watch was the first to sound the alarm and oppose Syria’s candidacy. The Geneva rights group’s campaign against Syria’s bid was supported by more than 25 human rights groups and dissidents, and was recently published by the UN General Assembly as an official UN document. See details at unwatch.org/stopsyria.

The election of 15 new council members is scheduled for May 20 at the UN General Assembly in New York. On the day prior, UN Watch and other human rights groups, including dissdents from Syria and China, will hold a press conference at UN headquarters in New York.