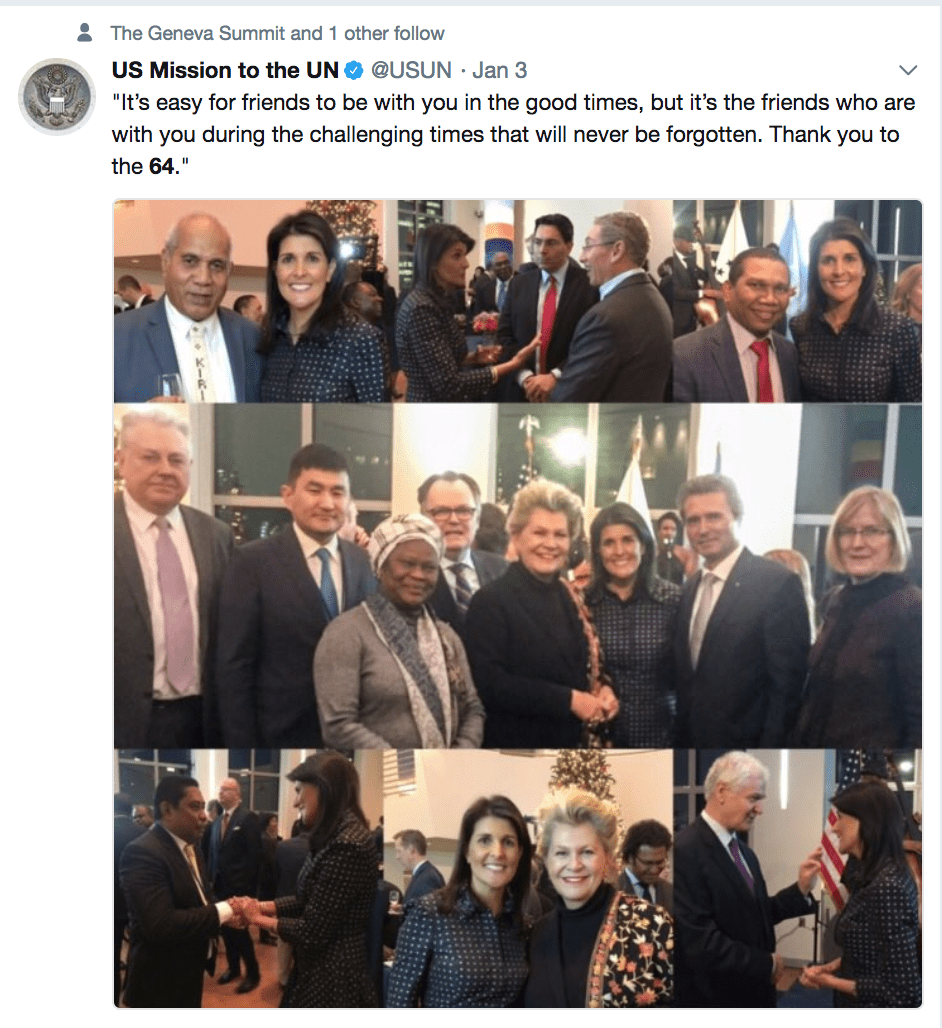 Thanks to a series of tweets by UN Watch, The New York Times issued a correction on Monday to an article that appeared to minimize and mock the countries who refused to support a resolution criticizing America for recognizing Jerusalem as Israel’s capital.
“On Wednesday, the United States Mission to the United Nations held a cocktail reception for the nine countries that voted against the resolution in the General Assembly’’ The New York Times originally wrote, making sure to cite the names, apart from the U.S. and Israel, of “Guatemala, Honduras, Togo, the Marshall Islands, the Federated States of Micronesia, Nauru and Palau.”
The clear message: the U.S. Ambassador Nikki Haley held a reception for seven ridiculous little countries, and only those would support the U.S. and Israel.
Yet it turns out, as UN Watch Executive Director Hillel Neuer quickly tweeted to the reporter, that the reception was in fact held for 64 countries—not nine—and that these included a diverse and cross-regional group of better-known countries, including Canada, Australia, Czech Republic, Poland, Argentina, Mexico and Kenya.
While the correction was made that the reception was for 64 and not nine, as described below, the NYT’s corrected version doubled down in mentioning only the tiny countries listed in its original piece. They would not mention Argentina, Australia, Canada, or any of the others invited to the reception.

.@mschwirtz Why did you report in @NYTimes that @NikkiHaley held a reception for only 9 countries—“Guatemala, Honduras, Togo…”—when in truth it was for 64 nations who refused to condemn the U.S., including Canada, Australia, Czech, Poland, Argentina, Mexico, Kenya & more? pic.twitter.com/IlkDGXb4ob

The author of the article, Michael Schwirtz, initially rejected Neuer’s attempt to correct the error, and wrongly stated that a vote to abstain means “you didn’t vote,” perhaps conflating abstention with being absent:

Those countries that abstained weren’t invited. Abstained means you didn’t vote—for or against.

Finally, after Neuer corrected him again and sent him numerous sources, the journalist began to realize he may have been wrong:

Eventually, he thanked Neuer for bringing the mistake to his attention:

You're right. From the US mission: "countries that did not vote ‘yes’ on the resolution were invited." Correction will be issued. Thanks for keeping a watchful eye.

“An earlier version of this article mischaracterized the nature of a cocktail reception held by the United States Mission to the United Nations,” The New York Times’ correction said. “It was for countries that did not support a General Assembly resolution denouncing the United States’ decision to recognize Jerusalem as Israel’s capital, including those that abstained or were absent for the vote, not just for the nine countries that voted against it. Aside from Israel and the United States, these included Guatemala, Honduras, Togo, the Marshall Islands, the Federated States of Micronesia, Nauru and Palau.”