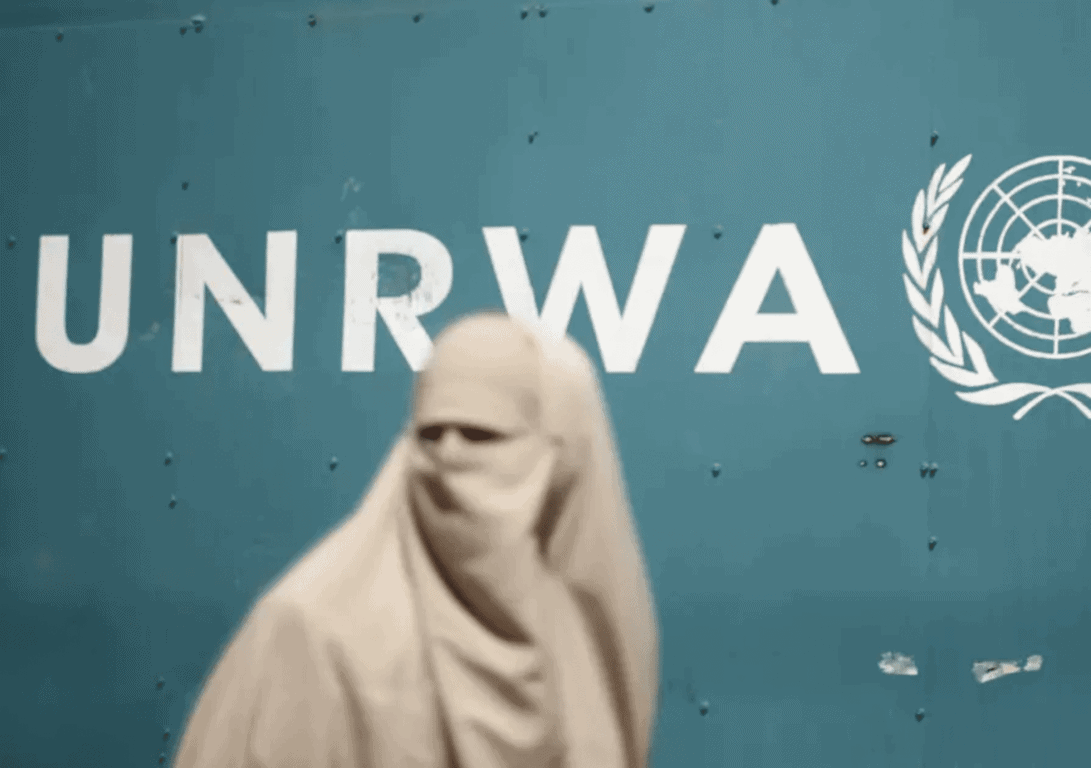 A Palestinian woman takes part in a protest against possible reductions of the services and aid offered by United Nations Relief and Works Agency (UNRWA), in front of UNRWA headquarters in Gaza City August 16, 2015.. (photo credit: REUTERS/MOHAMMED SALEM)

Time Line of Events Leading up to U.S. Freeze of UNRWA Funding

Dec. 6, 2017 – Trump issues statement officially recognizing Jerusalem as Israel’s capital: “But today, we finally acknowledge the obvious: that Jerusalem is Israel’s capital.  This is nothing more, or less, than a recognition of reality.  It is also the right thing to do.  It’s something that has to be done.”

Trump is clear not to predetermine the boundaries of Israeli Jerusalem, saying this is a final status issue to be decided by the parties in negotiations—“In making these announcements, I also want to make one point very clear:  This decision is not intended, in any way, to reflect a departure from our strong commitment to facilitate a lasting peace agreement.  We want an agreement that is a great deal for the Israelis and a great deal for the Palestinians.  We are not taking a position of any final status issues, including the specific boundaries of the Israeli sovereignty in Jerusalem, or the resolution of contested borders.  Those questions are up to the parties involved.”

Dec. 18, 2017 – The US uses its veto to block an Egyptian sponsored resolution intended to reverse Trump’s Jerusalem announcement at the UN Security Council. All other security Council members support the resolution.

Ambassador Nikki Haley delivers two speeches at that meeting. In her first speech she harshly criticizes UN Security Council resolution 2334 adopted in December 2017, calling it “an impediment to peace” because it “misplaced the blame for the failure of peace efforts squarely on Israeli settlements,” giving “a pass to Palestinian leaders who for many years rejected one peace proposal after another,” and prejudged final status issues. By contrast, Trump’s announcement did not prejudge final status issues, she says.

In her second speech explaining the U.S. vote, Haley defends the U.S. announcement as a matter of sovereignty and emphasized the leading role played by the U.S. in supporting the Palestinians. “The United States has done more than any other country to assist the Palestinian people. By far. Since 1994, we have given over $5 billion to the Palestinians in bilateral economic assistance, security assistance, and humanitarian assistance… Last year, the United States voluntarily funded almost 30% of UNRWA’s budget. That’s more than the next two largest donors combined. And it’s vastly more than some of the members of this Council that have considerable financial resources of their own.” Haley castigates the other members of the Security Council saying “What we witnessed here today in the Security Council is an insult. It won’t be forgotten.”

Dec. 21, 2017 – Following the U.S. veto in the Security Council, the resolution is presented to an emergency special session of the General Assembly on December 21. It is adopted by a vote of 128 to 9 with 35 abstentions and 21 no-shows.

In advance of the vote, Haley warns countries against criticizing U.S. sovereignty in Twitter and Facebook posts: “At the UN we’re always asked to do more & give more. So, when we make a decision, at the will of the American ppl, abt where to locate OUR embassy, we don’t expect those we’ve helped to target us. On Thurs there’ll be a vote criticizing our choice. The US will be taking names.”

In her speech at that special session, Ambassador Haley says “this vote will be remembered” for other countries’ disrespect of the United States. Haley rebukes those countries, stating: “But we’ll be honest with you. When we make generous contributions to the UN, we also have a legitimate expectation that our good will is recognized and respected. When a nation is singled out for attack in this organization, that nation is disrespected. What’s more, that nation is asked to pay for the “privilege” of being disrespected.”

Jan. 2, 2018 – At a press conference at UN Headquarters in New York, Ambassador Haley responds to a question on whether the U.S. would continue to provide funding to UNRWA: “I think the president has basically said that he doesn’t want to give any additional funding until the Palestinians are agreeing to come back to the negotiation table… We’re trying to move for a peace process but if that doesn’t happen the president is not going to continue to fund that situation.”

“It’s not only Pakistan that we pay billions of dollars to for nothing, but also many other countries, and others. As an example, we pay the Palestinians HUNDRED OF MILLIONS OF DOLLARS a year and get no appreciation or respect. They don’t even want to negotiate a long overdue… peace treaty with Israel. We have taken Jerusalem, the toughest part of the negotiation, off the table, but Israel, for that, would have had to pay more. But with the Palestinians no longer willing to talk peace, why should we make any of these massive future payments to them?”

Jan. 3, 2017 – Ambassador Nikki Haley hosts a reception for 64 “Friends of the US” countries who did not support UN General Assembly Jerusalem resolution.

Jan. 5, 2017 – UNRWA spokesman Chris Gunness says “We are seeing the reports on this matter [U.S. withholding funds to the agency] but have not been informed directly of a formal decision either way by the U.S. administration.”

Jan. 7, 2018 – Israeli Prime Minister Netanyahu says at the weekly Cabinet meeting: “I completely agree with President Trump’s sharp criticism of UNRWA. UNRWA is an organization that perpetuates the Palestinian refugee problem, and perpetuates also the narrative of the so-called right of return, whose goal is the elimination of Israel. For these reasons, UNRWA should be shut down.”

Netanyahu recommends a gradual approach, saying: “I have a simple suggestion: UNRWA’s aid money should be transferred gradually to the UNHCR, which has clear criteria for supporting true refugees, and not the fake refugee status we have today under UNRWA… I have expressed this position to the United States. This is the proper way to shut down UNRWA and to ensure that real refugee problems are cared for, should any remain [once UNHCR criteria for recognizing refugees are applied to the Palestinians].”

Jan. 12, 2017 – UNRWA Spokesperson Chris Gunness tells Reuters: “The human impact of losing significant funding could be catastrophic in the real lives of real people whom the U.N. is mandated to protect…Palestine refugees are among some of the most vulnerable people in the Middle East. Our health services offer a life line, quite literally, to vulnerable women and children, the sick and the elderly.

Jan. 14, 2018 – Mahmoud Abbas attacks Trump in a fiery speech to the Palestinian Central Council, calling his peace proposal “the slap of the century,” and insulting Trump, saying “May your house be destroyed.”

Jan. 14, 2018 – U.S. funding for UNRWA is still under review, but press reports say that Trump is expected to cut the first installment of $125 million by half.

Jan. 15, 2018 – At the daily press briefing, Spokesman for the Secretary-General, Stephane Dujarric responds to questions about UNRWA: “I think it’s… it’s very important to understand a few things.  One, UNRWA’s mandate is given to it by the General Assembly to support humanitarian human development work.  UNRWA serves, I think, some of the most marginalized population in the Middle East.  And I think its presence through its activities and its presence through health, education, and humanitarian help is a force for stabilization in a very volatile… a very volatile area.”

Jan. 16, 2018 – The U.S. announces it is holding back more than half of the funding meant to for UNRWA ($65 million out of $125 million) pending a “fundamental re-examination” of the agency’s programs. State Department spokeswoman Heather Nauert says the move is not a punishment and that “[t]he $ 65 million is being frozen at this time, it’s not canceled, it’s just being held for future consideration.”

PLO Executive Committee member Hanan Ashrawi slams the move, blaming it on Netanyahu’s call to gradually dismantle the agency, and saying it “will generate further instability throughout the region.”

The PLO representative in Washington, Husam Zomlot, says that “taking away food and education from vulnerable refugees does not bring a lasting and comprehensive peace,” and warns that “these actions add greater uncertainty to an already volatile situation in Palestine and in the region.”

Israeli Ambassador to the UN Danny Danon praises the move accusing UNRWA of misusing international aid to support an anti-Israel agenda of hate and saying “[i]t is time for this absurdity to end and for humanitarian funds to be directed towards their intended purpose: the welfare of refugees.”

UNRWA Commissioner-General Pierre Krähenbühl says the reduced contribution “impacts regional security,” and calls for a global fundraising effort to make up for the loss.

Jan. 17, 2018 – Belgium agrees to fund $23 million of the shortfall caused by the U.S. withholding of funds. UNRWA Spokesperson Christopher Gunness says this is “the most serious financial crisis in UNRWA’s 70-year history.”

Jan. 18, 2018 – U.S. announces it will not provide $45 million in food aid for Palestinians that it pledged to UNRWA last month. State Department Spokeswoman Heather Nauert says that the pledge was aimed at helping UNRWA with “forecasting,” but it was not a guarantee. Nauert adds that other countries need to help more.