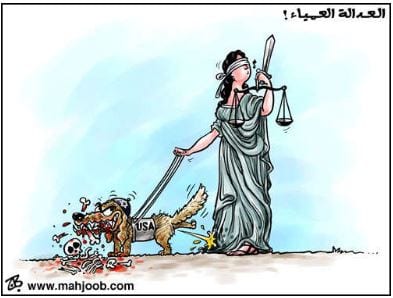 “For the UN human rights system to be credible in the fight against racism, its own representatives must not be allowed to incite hatred and racial discrimination with impunity,” wrote UN Watch executive director Hillel Neuer, in a letter sent today to the UN High Commissioner for Human Rights.

“Depicting Jews as dogs and bloodthirsty has a dark history,” said Neuer. “We urge Ms. Pillay to condemn this incitement to racism by a UN rights official, and to demand that Mr. Falk immediately remove the offending caricature and apologize.”

The full letter follows below.

We write to convey our grave concern over the publication of an overtly anti-Semitic cartoon by Richard Falk, an expert of the UN Human Rights Council. We urge you—as the highest moral authority of the UN human rights system—to condemn Mr. Falk’s actions, which constitute incitement to hatred and racial discrimination as defined under Articles 1 and 4 of the International Convention on the Elimination of All Forms of Racial Discrimination.

Mr. Falk published the attached cartoon in his blog post of June 29. As you can see, it depicts a dog urinating on a woman symbolizing justice, and devouring a dead body with blood and bones spewing out of its mouth. The dog is shown in a garment marked “USA” and wearing a Kipa, the Jewish religious head covering, which is marked by a Star of David. The cartoon is manifestly anti-Semitic and, before a worldwide Internet audience, incites hatred against Jews as well as against Americans.

We are aware that mandate-holders are answerable only to the Council, and that Mr. Falk and his supporters will claim that the cartoon was published in his “personal capacity.” As you know, however, Secretary-General Ban Ki-moon, in identical circumstances, unequivocally ruled that Mr. Falk has “a clear responsibility to uphold the high standards of the United Nations and the Council.” Accordingly, the Secretary-General twice condemned Mr. Falk for having propagated the 9/11 conspiracy theory and insulting the memory of the 3,000 victims of that attack. Likewise, in 2005, your predecessor, High Commissioner Louise Arbour did not hesitate to condemn expert Jean Ziegler for what she described as his “inflammatory” and “highly irresponsible” remarks.

For the UN human rights system to be credible in the fight against racism, its own representatives must not be allowed to incite hatred and racial discrimination with impunity. We urge you to speak out.
Sincerely,
Hillel C. Neuer
Executive Director