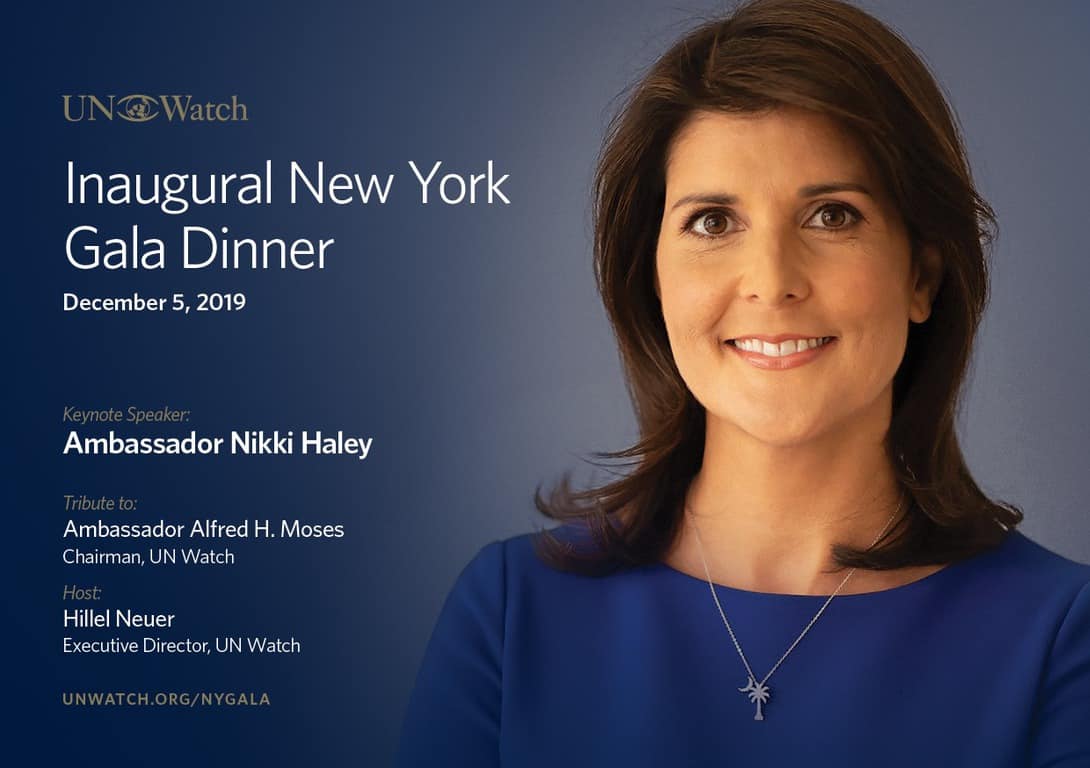 GENEVA, September 10, 2019 — UN Watch, the Geneva-based non-governmental human rights organization, announced today that former U.S. Ambassador to the United Nations Nikki Haley will receive its 2019 Eleanor Roosevelt Award, in recognition of her championing the values of the United Nations Charter by fighting anti-Israeli bigotry at the world body.

The prize will be presented at the watchdog group’s inaugural New York City gala dinner on December 5th, where Haley will address ambassadors, community leaders and activists. CLICK HERE NOW TO RESERVE TICKETS

The Eleanor Roosevelt Award, named for the legendary U.S. delegate to the UN who served as founding Chair of of its Commission on Human Rights, honors public figures who have shown uncommon courage in defense of the founding principles of the UN. Roosevelt was an outspoken defender of Israel’s right to equal treatment in the international arena.

“Ambassador Haley was chosen for exemplifying the principles of Eleanor Roosevelt, and for upholding the equal treatment guarantee of the UN Charter, in her brilliant and bold opposition to anti-Israeli prejudice that pervades the UN,” said Hillel Neuer, executive director of UN Watch.

“When in the 1960s the UN began to target Israel with one-sided resolutions, Eleanor Roosevelt spoke out. With grace and grit, Ambassador Haley continued this noble legacy. Haley was unafraid to stand alone, defend moral clarity and call out the obsessive singling-out of the Jewish state by UN bodies, such as the infamous Human Rights Council, which have become hijacked by tyrannies,” Neuer said.

Throughout her tenure, Haley firmly advocated for an end to the UN’s discrimination against Israel, including by ending U.S. funding for the failed United Nations Relief and Works Agency (UNRWA), which has been shown to incite terrorism and promote antisemitism.

Thank you. I’m so proud of the work our team did. We were thankful to have you as a valued partner. ❤️🇺🇸 https://t.co/gIJZMk3YWu

UN Watch is a key player in the fight against anti-Israeli bias at the UN, advocating with high officials, holding perpetrators to account, and educating public opinion, including with powerful UN speeches viewed by millions across the globe.

.@NikkiHaley on @HillelNeuer: "Please help me give the biggest thank you to Hillel. Because, you want to look at courage—that is courage. He fights every day.

I’m cheering for you every day. You’re fighting the good fight. And if anything starts to go wrong, I’ve got your back." pic.twitter.com/V3cKw0hcmZ