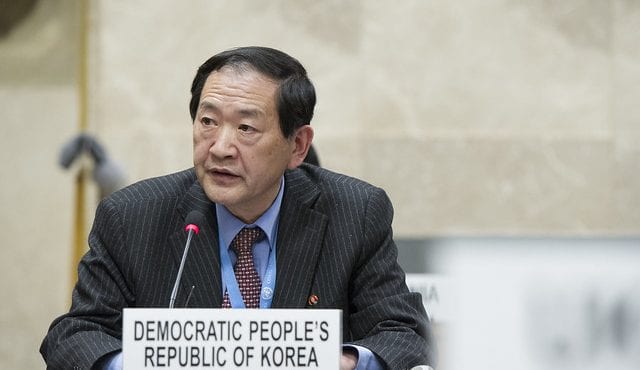 Tae Song Han, Permanent Representative of North Korea to the UN in Geneva, presented the country’s report to the Human Rights Council on May 9, 2019.

GENEVA, May 9, 2019 — Following this week’s glowing review of DR Congo’s human rights record, the UN Human Rights Council gathered today to shower praise upon North Korea, one of the most abusive regimes in the world. (See quotes below.)

While the mandatory review exercise serves as a platform to scrutinize all governments in order to improve the lives of victims worldwide, most countries chose not to speak against North Korea’s atrocious human rights record, which includes torture, forced labor camps, public execution, and violence against children and women.

Representing North Korea at the UN session was Tae Song Han, Permanent Representative of North Korea to the UN in Geneva, who claimed the government respected human rights. “In the DPRK, people are the genuine masters of the state and society. Top and absolute priority is given to their interests,” he said.

PRAISE OF NORTH KOREA AT UN HUMAN RIGHTS COUNCIL
May 9, 2019

China: We “welcome His Excellency and recognize DPRK’s efforts and achievements.”
Cuba: We “thank the delegation for the efforts put into improving the wellbeing of its people.”
Russia: Recent achievements “indicate that the DPRK is improving the human rights situation.”
Burundi: “The government is respectful of human rights obligations both locally and internationally.”
Venezuela: “We welcome the progress made and note free universal medical assistance.”
Pakistan: We “note with appreciation cooperation with human rights framework.”
The Philippines: We commend “efforts made for the protection and promotion of women’s rights.”
Syria: “We commend legislations that have been adopted.”
Myanmar: We “commend DPRK for amending its labor laws.”
Nigeria: We “note achievements in protecting women and children.”
Belarus: We note efforts for “improvement of daily life and strengthening the legal system.”
Equatorial Guinea: We “admire the country’s progress in education.”
Zimbabwe: “The DPRK worked to enact and amend human rights-related laws.”
Algeria: We “welcome legal reforms in respect of the labor law.”
Iran: “We commend constructive engagement with the UPR process with a view of rejecting any politicization and double standards.”
Haiti: “Notes efforts made to improve the quality of life of its citizens despite heavy economic sanctions.”

Big lie: North Korea boasts its alleged commitment to its people's wellbeing, as the regime undergoes a mandatory review at the @UN_HRC: "'No one is left behind' is a characteristic of our social system. 'Everything for the people' is our iron rule." #UPR33

North Korea—home to one of the world's most neglected humanitarian crises—claims that aid workers have the access they need in the country: "If they cannot access a certain area, there is no need to provide aid. We ensure that aid is given to those who most need it." #UPR33