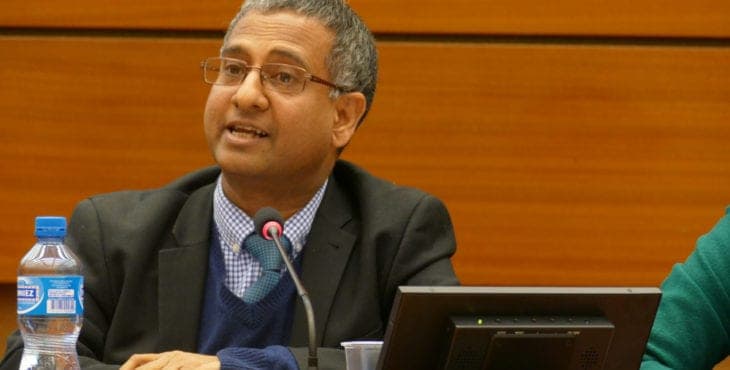 The UN expert on freedom of religion has just released his first-ever report on antisemitism. Click here for PDF

The present report by the Special Rapporteur on freedom of religion or belief, Ahmed Shaheed, identifies violence, discrimination and expressions of hostility motivated by antisemitism as a serious obstacle to the enjoyment of the right to freedom of religion or belief. The Special Rapporteur notes with serious concern that the frequency of antisemitic incidents appears to be increasing in magnitude in several countries where monitors attempt to document it, including online; and that the prevalence of antisemitic attitudes and the risk of violence against Jewish individuals and sites appears to be significant elsewhere, including countries with little or no Jewish population. He finds that these incidents have created a climate of fear among a substantial number of Jews, impairing their right to manifest their religion, and that discriminatory acts by individuals and laws and policies by governments have also had a negative impact. The Special Rapporteur stresses that antisemitism, if left unchecked by governments, poses risks not only to Jews, but also to members of other minority communities. Antisemitism is toxic to democracy and mutual respect of citizens and threatens all societies in which it goes unchallenged.

The Special Rapporteur urges States to adopt a human-rights based approach in combatting antisemitism, as in combatting other forms of religious intolerance. He encourages States to identify, document, and prohibit the commission of antisemitic hate crimes;  to implement such measures; to enhance government outreach to Jewish communities; to protect individuals at risk of violence; and to take actions in the areas of education and awareness-raising aimed at curbing the spread of antisemitic views. The Special Rapporteur also directs recommendations to the media, to civil society, and to the United Nations on efforts that all stakeholders can take to combat antisemitism and promote religious freedom and pluralism.

73. The Special Rapporteur urges States, civil society, the media and the United Nations to follow a human rights-based approach to combatting antisemitism. This includes implementing measures which foster the development of democratic societies that are resilient to extremist ideologies, including antisemitic propaganda, by fostering critical thinking, empathy, and human rights literacy among self-reflective citizens with the requisite proficiency and confidence to peacefully and collectively reject antisemitism and other forms of intolerance and discrimination. It also requires investments in education and training to enhance society-wide literacy about the different ways in which antisemitism manifests itself.

A. States and political actors

74. The primary responsibility for addressing acts of intolerance and discrimination rests with States, including their political representatives. As such states must also foster freedom of religion or belief and pluralism by promoting the ability of members of all religious communities to manifest their right to freedom of religion or belief, and to contribute openly, on an equal footing, to society.

75. Governments must also acknowledge that antisemitism poses a threat to stability and security, and that antisemitic incidents require prompt, unequivocal responses from leaders. Such responses should be based on the recognition that the commission of antisemitic hate crimes engages the obligation of the State under international human rights law to protect Jews against the violation of their fundamental rights. States must also invest in preventive security measures, compliant with international human rights law, to deter antisemitic hate crimes.

76. States should enact and enforce hate crime legislation that recognizes antisemitism as a prohibited bias motivation and that is clear, concrete and easy to understand. States should impose systems, routines and training in place to ensure that relevant officials recognize antisemitic hate crimes and record them as such. While recalling that racist and religious intolerance, including antisemitism, are commonly expressed through coded expressions, it is recommended that a clear set of indicators for identifying bias motivation be employed in law enforcement. Because of coded expressions and the continuing reinvention of new forms of antisemitic speech and action, such indicators would not in themselves be all encompassing or prove that an incident was a hate crime. However, where an antisemitic crime is established in line with the criteria set out under international law, there must be recourse to remedy to victims of such hate crimes.

77. The Special Rapporteur recognises that the IHRA Working Definition of Antisemitism can offer valuable guidance for identifying antisemitism in its various forms, and therefore encourages States to adopt it for use in education, awareness-raising and for monitoring and responding to manifestations of antisemitism. The Special Rapporteur recommends its use as a critical non-legal, educational tool that should be applied in line with guidance provided by the Rabat Plan of Action, Human Rights Committee in General Comment 34, and the CERD in General Recommendation 35. In this regard, the Special Rapporteur notes that criticism of the Government of Israel is not per se antisemitic, as stated in the Working Definition, unless it is accompanied by manifestations of hatred towards Jews in general, or expressions that build on traditional antisemitic stereotypes.

78. States should establish data-collection systems to document information on antisemitic hate crimes. Collecting accurate, disaggregated data is essential for enabling policy makers and law-enforcement authorities to understand the scope of the problem, discern patterns, allocate resources and investigate cases more effectively. States should also work with Jewish communities and organizations to strengthen efforts to monitor, document and report on hate crimes and other acts motivated by antisemitism, and should consider appointing a senior official to oversee such efforts.

79. Accessible and confidential mechanisms that facilitate the reporting of antisemitic hate crimes should be established, and efforts to raise awareness within Jewish communities as to where and how to report incidents should be undertaken. Governments should hold consultations with Jewish communities and relevant victim support organizations to develop effective strategies in support of victims and they should work with national human rights institutions, academics, NGOs and international organizations to conduct surveys that help clarify the needs of victims of antisemitic attacks.

80. Political parties should adopt and enforce ethical guidelines in relation to the conduct of their representatives, particularly with respect to public speech. Party leaders must promptly, clearly and consistently reject manifestations of antisemitism within their parties and in the public discourse.

81. Civil society organizations should ensure that their actions do not contribute to antisemitic discourses and take a multi-stakeholder, multidisciplinary, human rights-based approach to combatting antisemitism. Academic experts and researchers can support governments by providing independent expert advice and insights on the prevalence and manifestations of antisemitism, as well as on effective ways to counter it. They can support the work of states to monitor and report on antisemitic hate crimes, and other expressions of antisemitic attitudes. The Special Rapporteur notes that the OSCE has designed a guide to spread the practice of civil society coalition building to address discrimination and build more peaceful and tolerant societies.

82. Civil society organisations have a responsibility to ensure that their own practices do not contribute to antisemitic discourses. They can play an important role in raising awareness about the various ways in which antisemitism can be manifested and about the impact of prejudiced messages faced by Jews and Jewish communities on human rights and society at large. These actors can also support government efforts to raise awareness within Jewish communities as to where and how to report antisemitic incidents.

83. They can also play an integral role in reassuring the Jewish community after an attack, including in co-operation with parliamentarians and government officials and other communities and by publicly demonstrating solidarity and signaling a zero-tolerance policy towards antisemitism. Civil society should also strive to establish collaborative networks to foster mutual understanding, promote dialogue and inspire constructive action.

84. Educators can develop curricula that raise awareness about human rights and foster empathy through the incorporation of creative exercises and content that challenge and counteract antisemitic attitudes. Effective methodologies for educating students about antisemitic stereotypes include exploring the history of stereotypes, exploring the role of power dynamics in stereotypes and acknowledging shared responsibility for identifying and rejecting stereotypes. The Special Rapporteur notes the UNESCO/ODIHR Guidelines on Addressing Antisemitism through Education: Guidelines for Policymakers, and the ODIHR & UCL Holocaust Education Centre pedagogical knowledge guide for teachers in tackling antisemitism in classrooms.

85. NGOs have and should continue to play an important role in denouncing antisemitism online and bringing incidents to the attention of lawmakers and the wider public, relating it to the overarching issues of hate speech and incitement to violence and terror.

86. Social media companies should take reports about cyberhate seriously, enforce terms of service and community rules that do not allow for the dissemination of hate messages, provide more transparency of their efforts to combat cyberhate, and to offer user-friendly mechanisms and procedures for reporting and addressing hateful content.

89. Various entities of the United Nations system, including OHCHR, UNESCO, the Alliance of Civilizations, and the Office of the Special Advisor on the Prevention of Genocide should enhance their cooperation with relevant human rights treaty bodies and special procedures mandate holders in order to stimulate joint action on antisemitism and other forms of hate.